Home Mediawatch How Messi is worth £20.1m more to Barca than Lingard is to Utd 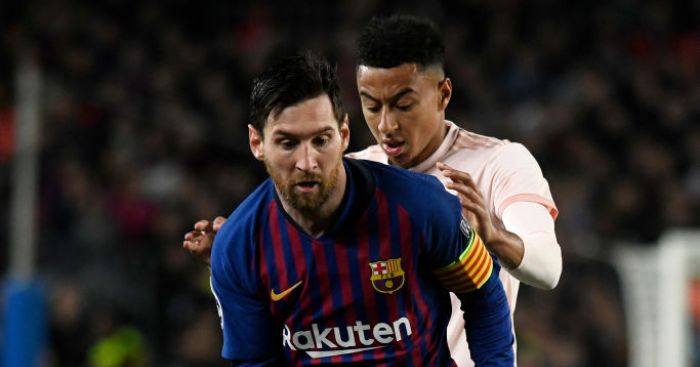 That’s according to ‘the experts’, who reckon ‘the ageing Lionel Messi’ is only worth about £55m to Barcelona.

Let’s get analytical
Mediawatch cannot claim to have heard of Carteret Analytics before. A quick bit of research tells us that they have ‘developed methodology, research and algorithms’ to ‘provide highly accurate insights within professional football and rugby on player ability, rating and recruitment’.

And that sounds fun. Enough so for The Sun to produce an exclusive article based entirely on findings that describe Jadon Sancho as ‘massively overpriced’ at £120m.

A reminder now that Sancho is a 19-year-old England international with 16 goals and 17 assists in 31 club appearances this season. But his ‘intrinsic value’ – the ‘monetisation of a player’s rating’ – to Manchester United is a meagre £65.79m.

How have they come to that sum? Only they know. It ‘takes into account how they fare compared to the current squad and how far they could influence games to a winning conclusion,’ apparently. Which is one way of saying ‘talent’ or ‘quality’.

But it is worth pointing out that Jesse Lingard’s ‘intrinsic value’ to United is said to be £33.54m. And he hasn’t scored or assisted a Premier League goal since December 2018.

If you think Sancho’s ‘intrinsic value’ to United is low, how about what he is worth to Dortmund? Even with more than two years left on his contract, his value is just £49.46m. So Dortmund would obviously ‘be laughing all the way to the bank if a team does cough up a huge fee’.

But to Barcelona, Sancho would be ‘a better option…than the ageing Lionel Messi, by £14.3m’.

And this is brilliant, because Messi is apparently worth £53.64m to Barcelona; just over £20m more than Lingard is worth to United.

United should, apparently, be spending the money on Jack Grealish. He might play in a completely different position and at a club less inclined to do business, but his ‘true value is £82.42m rising to £91.58m’.

One thing is for certain: any club that wants to sign Sancho ‘might want to have a re-think’ (unless you want to replace ‘the ageing Lionel Messi’). You can get Lingard for just over half the ‘intrinsic value’.

The verdict is in
Elsewhere on The Sun website is this headline:

‘Arsenal verdict: Alexandre Lacazette and Pierre-Emerick Aubameyang should not be on pitch at same time’

This after both scored in a 4-0 win at the weekend, with Aubameyang playing the final pass before Bukayo Saka assisted Lacazette to score against Olymapiacos.

There are probably better ways of using them at the same time, granted. But dropping either an elite goalscorer or a player approaching some sort of form, both of whom are rated highly by the manager, seems ill-advised.

Tone-deaf365
Speaking of ill-advised: this was a really shit excuse for a joke. Sorry.

This is just weird @F365. pic.twitter.com/iyhnfnd3iB

Accidental Partridge of the day
Writes Mark Irwin in The Sun:

‘THERE was a time not so long ago when the sound of a helicopter hovering over Cobham would have them running for cover quicker than the Vietcong in Apocalypse Now.

‘In the days when Roman Abramovich was still a hands-on owner, his flying visits to Chelsea’s training ground usually meant bad news for the manager.

‘But Roman has put his chopper away since being kicked out of the UK a couple of years ago.’

Chelsea dagger
Also in that column, Irwin constructs a fabulous straw man before proceeding to summarily dismantle it.

‘Only mayflies and lemmings have shorter lifespans than Chelsea managers, who seem to inevitably fall foul of the most Machiavellian dressing room in football.

‘So Lampard probably won’t be surprised by the recent rumblings of discontent surrounding his treatment of certain disaffected players.’

Well Mediawatch certainly is. Whose are these ‘disaffected players’ whose ‘recent rumblings of discontent’ have challenged Lampard’s authority? Must have missed that.

‘And he certainly won’t be under any illusions about his long-term prospects if he does not get to grips with the malcontents.’

Yep, it’s definitely ‘the malcontents’ that Lampard has to worry about. Not his own management, coaching, team selection and tactics. It’s that bloody Chelsea dressing room again.

‘Dele Alli is one of English football’s best recent success stories, signed by Tottenham for just £5m and now a huge England star.

‘But the story behind Alli’s arrival at White Hart Lane in 2015 has caused raised eyebrows with Tottenham’s former head of recruitment Paul Mitchell happy to take the credit.’

‘It was ex-Spurs boss David Pleat, still a hugely respected figure at the club and someone with an eye for the best young talent, who actually persuaded Tottenham to push the button while others hesitated.

‘In fact, this column is reliably informed that Mitchell baulked at the £5m price and it was Pleat who persuaded then Spurs technical director Franco Baldini to give it the green light.’

Well fair enough. But is Alli really ‘now a £100m-plus superstar and one of England’s biggest and best stars’? Is he actually ‘flourishing under Jose Mourinho’?

He was not part of the last six England squads, has one goal and no assists in his last 12 Tottenham games and even Carteret Analytics would struggle to come up with an algorithm that dictates he is ‘a £100m-plus superstar’. That’s twice a Messi!

"If they can keep hold of Jack and spend more money on the right players, why can't Villa fight for top four?

They should certainly try.

Good lord. Villa were one of the highest spenders throughout Europe last summer and are currently a point outside the relegation zone. They can fight for the top four but it will probably be in the Championship.

Evralasting
‘Evra opens up on the level of influence he has on Man Utd team selection’ – Daily Mirror website.

Spoiler: Obviously not much, unless you believe Ole Gunnar Solskjaer only started playing Brandon Williams solely on the recommendation of a novice coach.

Spoiler: Because that is not Liverpool’s decision to make.

Recommended reading of the day
David Conn on Man City and UEFA.