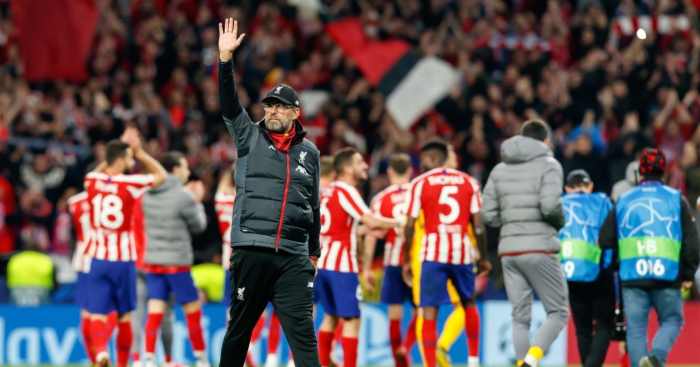 Holding out for a hero
‘Liverpool must summon the spirit they showed against Barcelona last season when they turned a 3-0 first-leg defeat and certain elimination into a heroic four-goal second-leg win’ – Charlie Wyett, The Sun.

We hate to p*** on your over-salted chips but they are only 1-0 down and it’s only half-time. And now they go to Anfield, where they haven’t lost a Champions League or Premier League in almost three years. They don’t need ‘heroism’; they just need to play a bit better.

The rain in Spain…
The focus of the back page of The Sun is fascinating as it highlights Jurgen Klopp’s poor record in Spain, claiming that ‘JURGEN KLOPP suffered yet another miserable Spanish away day’, and detailing that the German is now ‘without an away win against Spanish rivals in SEVEN games’.

What’s probably also worth noting is that of those previous six occasions, only once – against Real Madrid with Borussia Dortmund six years ago so it is super-relevant – did it actually cost Klopp a place in the Champions League. A nightmare indeed.

Obscenity
At the other end of the Liverpool fan/journalist scale, there is genuine disgust that Atletico Madrid played defensively and still conspired to win 1-0 against the mighty Liverpool. How bloody dare they?

‘Atletico are a side with quality who use those qualities to play like a Sam Allardyce team.

‘They will always be difficult to break down. But the truth is, they are not very good. Not good at all.’

That was David Maddock in the Daily Mirror, who was in Madrid and yet somehow missed the fact that Atletico are unbeaten at home in Madrid by anybody but Real Madrid over the last two seasons. To say they are ‘not good at all’ is extremely short-sighted and more than a little snobbish. This might come as a shock to anybody who largely writes about Liverpool, but not everybody can – or even aspires to – play like Liverpool.

‘This wasn’t football at all,’ wrote Maddock, spoiled by the type of football he has been watching from the Reds over the last two seasons. It is football; just not as you know it.

Using words like ‘stultifying’, ‘shocking’, ‘excruciating’, ‘turgid’, ‘absurd’ and ‘almost obscene’ to describe a winning performance makes the writer look like nothing but a terrible, terrible loser. The truth is, it is not very good. Not good at all.

Mind you, he has got tremendous form.

Athletic types
‘Bit of a whingy ‘right on’ crowd this evening. If Liverpool had spoiled another team’s night in Europe – whatever the circumstances tactically – you’d all be delighted,’ tweeted Athletic man Simon Hughes on Tuesday night, presumably shattered after walking to Madrid.

Thankfully he recovered and remembered just in time to re-tweet (of course) a piece from fellow Athletic Red James Pearce, who wrote that ‘Atletico’s antics left a sour taste’.

Does that mean Pearce is part of the ‘right on’ crowd? Maybe only one of them remembers Rafa Benitez.

Horrible histories
Trevor Sinclair is absolutely not a Liverpool fan (he had to apologise for using the term ‘bin dipper’ in a tweet just a few months ago) but he is a man employed to talk absolute nonsense on talkSPORT. He too is incensed that Atletico Madrid did not take on the best team in the world in an open game of football. Because that would have gone so very well, wouldn’t it?

Sinclair is talking from the experience of facing Diego Simeone in the World Cup of 2002, describing him as a “horrible” character to play against.

“I’ve never been a ‘win at all costs’ person, so that’s probably why I didn’t win anything in my career.”

Well, that’s one of the reasons, Trevor, but carry on…

“We call it the Beautiful Game for a reason; it’s supposed to be beautiful to watch. This is an absolute load of rubbish. I don’t like seeing it.

“It was such a horrible game to watch.”

Unless of course you were supporting Atletico Madrid, because they actually, you know, won.

Silly Atletico. They really should have been more like Trevor with his Intertoto Cup medal.

And what was this ‘taunting jibe’?

“I think we started winning the game when our bus turned at the roundabout and we saw the reaction of the people. It enthused us. Something beautiful woke up in us.”

It sounds to the uninitiated that he was simply praising his own club’s fans. But one man’s tribute to supporters is another man’s ‘jibe’. We’re just glad we’re not that man.

Just so you know, Kaveh doesn’t have the “inside line on Jadon Sancho’s future” he in fact, opens the piece by saying “It is difficult to say where Jadon Sancho will be playing next season because so many clubs want him.” https://t.co/bWmawPJLJ6