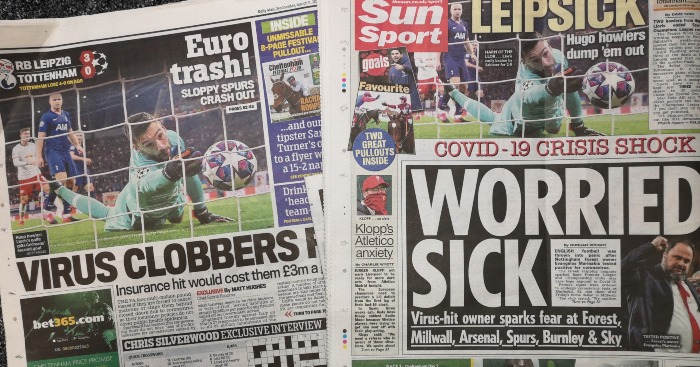 Sick news
It’s all arse about tit at The Sun, who do not even mention coronavirus in the first nine pages of their newspaper, with Robbie Williams’ refusal to dye his hair and Ellie Goulding’s confession that she was a “total mess” in her 20s considered more important than a global pandemic. When they do get round to mentioning it – on page 10 – they write that ‘CORONAVIRUS is likely to peak over Easter – causing the worst holiday disruption since World War Two’. Because of course the worst thing about WWII was the way it really f***ed about with people’s holidays.

In this topsy-turvy world, it is the sports pages which lead on the virus, because of course the fact that it might affect football is far more important than people, you know, dying (unless they happen to be a neighbour of former Liberty X singer Michelle Heaton; we’re not even kidding). The back page tells us that ‘ENGLISH football was thrown into panic’, which is odd because we all know that English football is basically deciding to carry on regardless.

In one of the most convoluted standfirsts in newspaper history, they tell us that ‘Virus-hit owner sparks fear at Forest, Millwall, Arsenal, Spurs, Burnley & Sky’, with Spurs, Burnley and Sky brought into the equation by former Tottenham defender Michael Dawson. Tenuous? Perhaps. But that’s how a virus spreads. Which should probably be pointed out to The Sun’s news men and women blithely doing the government’s work by suggesting to the UK’s working classes that the very worst that could happen is that their holidays could be disrupted.

Not sweet FA
Meanwhile, the Daily Mail puts coronavirus on their back page, which might surprise those who would not expect them to give a hoot about the health of the masses.

‘THE FA face multi-million pound losses if they are forced to cancel matches or stage them behind closed doors due to coronavirus as their insurance policies do not cover public health epidemics.’

Just a little…
Of course, all those back pages were written before Manchester City v Arsenal was called off about 1am on Wednesday morning. So it was left to the online bods to bring us that news. From MailOnline:

What is the cut-off point for ‘just hours’? We need a ruling because we are pretty sure that 19 hours does not qualify.

Can’t stop the feeling…
This is what the nation’s favourite Gary Lineker tweeted on the subject. But it’s important to remember that former footballer and TV presenter Gary Lineker is not an expert on viruses.

Manchester City v Arsenal is postponed. Off to Liverpool but can’t help feeling like it’s the beginning of the end of the football season. Despite the words of the late Bill Shankly, football is not more serious than life and death.

Obviously it wasn’t important for some to remember that Lineker is not an expert on viruses; even though the ‘can’t help feeling’ was the giveaway that he knows no more about this subject than you or I.

‘Gary Lineker warns ‘it’s beginning of the end of the football season’ as Man City vs Arsenal is axed due to coronavirus’ – The Sun.

‘Gary Lineker warns: ‘It feels like the beginning of the end of the football season’ as he expects the Premier League and Champions League to be CALLED OFF two months early because of coronavirus’ – MailOnline.

All about those Reds
‘Liverpool early title hopes dashed as Man City vs Arsenal game is postponed amid coronavirus fears’ – Liverpool Echo.

The wrong Wan
The ‘Manchester United are utterly f***ing brilliant’ campaign continues apace in The Sun, with Neil Custis penning a piece about Aaron Wan-Bissaka and his very impressive tackling statistics.

He writes about the tackling league table that the Manchester United defender is targeting, regardless of the fact that it kind of means actively hoping that the opposition have the ball and run towards you at pace.

‘United’s £50million summer signing Wan-Bissaka won all eight of his tackles in Sunday’s 2-0 derby victory over Manchester City, putting him on 66 successful challenges out of his total of 99 for the season.

Which makes it sound awful close. The reality? According to the Premier League – whose statistics are powered by Opta – Wan-Bissaka is actually on 99 successful tackles and Pereira is way ahead on 119. And no, we don’t have one half of a sodding clue where Custis got his numbers.

Surely alarm bells should have started ringing very loudly when they were putting together a league table that claimed Serge Aurier has the highest tackle success rate in the Premier League.

I’m a creep…I’m a weirdo

Jonathan Liew on the end of a Spurs era