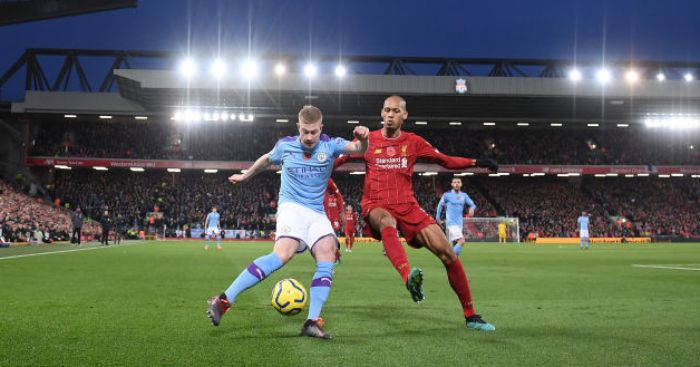 As Danny Murphy says: “I think it’s a load of nonsense!” His thoughts on Liverpool and Manchester City are precisely as such.

Honour roll
John Terry, Claude Makelele and Michael Essien once partook in a guard of honour for Kieran Lee, Chris Eagles and Dong Fangzhuo at Stamford Bridge. They did so to recognise the achievement of the opposition team – Manchester United – in winning the Premier League title.

“Jose Mourinho has said already they will get the guard of honour which they did to us,” were the words of the Chelsea captain at the time.

“Looking at some faces, it could not have been nice. We have to go through that and we fully respect them as players and individuals.”

Pep Guardiola seemed positively baffled by the suggestion that his Manchester City team would not afford Liverpool that same courtesy 13 years later. “Of course we are going to do it,” he said this week. “We are going to do it because they deserve it.”

Danny Murphy disagrees. And he was more than happy to tell talkSPORT why.

“It’s a perception of respect, ‘the right thing to do’, the message you’re trying to send to the football world that when somebody wins, you show respect and grace.

“The fact City will be doing it on Thursday will show humility, saying ‘well done’ to Liverpool and appreciation for their quality.”

“I think it’s a load of nonsense!”

“I don’t know where it started and why it started, I would feel uncomfortable doing it. I’d do it because you have to do it, but I wouldn’t want to do it, because it’s not done with sincerity.”

That’s kind of the point: you don’t want to do it but are made to, which encourages you to avoid being put in that situation again the following season.

As Gary Neville, who was part of the guard of honour Manchester United gave Chelsea in 2005, later wrote:

‘It was the right thing to do, and honourable gesture, though it stuck in my throat. I have respect for the champions of England, whoever they are, but it always hurts to see someone else with the trophy.

‘People said how unhappy I looked. I think someone wrote at the time that it was like me having to clap burglars into my own home. Spot on. As far as I was concerned, that was our trophy. How do you want me to look?’

United finished second, closer on points to a dominant Chelsea the following season, before winning three titles in a row. It didn’t seem like “a load of nonsense then”.

Murphy’s law
But Natalie Sawyer actually put that argument across. So could Murphy at least acknowledge that point of view?

“No. No. You know you’ve lost it. You don’t need to create a guard of honour to, what, to make you feel – so Fergie did it to make his players feel bad?”

Yes. And it ended up working.

“The fans don’t want you to do it. The players don’t want to do it, really. It’s all for effect.”

That is exactly the point. No-one wants to do it so they theoretically ensure not to have to in the future. It’s really quite straightforward.

“And it doesn’t mean anything really. I don’t see the point but I understand why the powers that be have probably created it, because it does give off the right message to those watching.”

What “powers that be”? It isn’t an FA decree or Premier League rule that new champions must be given a guard of honour by their next opponents. It is something both clubs agree to if they so wish. And it is essentially meaningless to everyone but the players that do it, or pundits that misconstrue it.

We need to talk about Kevin
That is unfortunately not as far as Murphy goes, of course.

“Think about the players clapping the ones coming on. Do you think Aguero’s going, ‘Oh, well played, Firmino. You’re a top player. I think the world of you’?

“I know he’s injured, Aguero. I’m using that as an example.”

You’d be good at Mediawatch, Danny.

“Aguero’s thinking, ‘Do I really have to clap these lads? Jesus.”

Well done for accidentally stumbling upon the name of a striker who might actually play.

“And De Bruyne’s clapping midfielders who can’t lace his boots.”

That will be Jordan Henderson (lost one Premier League game he has started since November 2017), Fabinho (more career goals in games between Liverpool and City in considerably fewer appearances than De Bruyne) and Georginio Wijnaldum (the “perfect midfielder” Jurgen Klopp has built around), that “can’t lace” a fellow professional’s boots. English, European and world champions, each, but so apparently inferior to a rival that the mere idea of him clapping them is laughable.

De Bruyne is obviously brilliant, and perhaps the best player in the Premier League. But he also isn’t a petty child and will probably show respect for a team and a midfield that is on course for the highest points total in English top-flight history.

Mirror image
Well done to the Daily Mirror website for properly milking that story for all its worth, mind.

But was it really necessary to publish the exact same quotes in two different stories, published 23 minutes apart?

‘Danny Murphy slams Man City’s guard of honour for Liverpool as “a load of nonsense”‘ – James Whaling, 9.33am.

Well that seems strange. Manchester United are one of only four clubs to have two or more players on ten or more Premier League goals so far this season. Plus they have Mason Greenwood, a player Solskjaer has often referred to as their “best finisher”, on 12 in all competitions. And Odion Ighalo’s loan was surely extended until January for a reason?

Let’s look at the first paragraph:

‘Ole Gunnar Solskjaer has warned his Manchester United forwards he may have to buy a big-name striker this summer after admitting the club are “too far away from where we need to be”.

A warning and a ‘may have to’ is already a climb down from a ‘need’. Maybe Solskjaer’s actual quotes will offer some clarity?

“We’ve always got to look at improving, and if they don’t improve, we might have to look somewhere else to get better because we have to be better. We’re too far away from where we need to be and want to be.”

Sounds exactly like ‘United need a new striker’. If their current ones end up not being good enough. Which is how transfers, squads, management and football works.

‘Out for the season’ isn’t quite as impactful when you consider there are seven games left.

Recommended reading of the day
Sachin Nakrani on racial bias in English commentary.