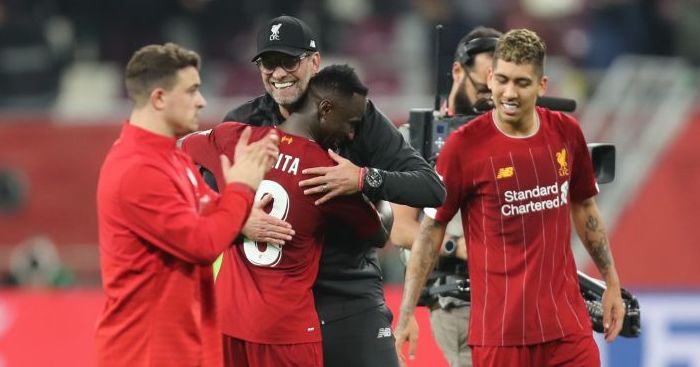 Copy cat cocoa
‘How Jurgen Klopp copied Pep Guardiola to create Liverpool FC success’ is the preposterous headline in the Manchester Evening News that immediately gets the fingers of Mediawatch itching and a-twitching. So the team currently unbeaten and 22 points ahead of second place is only really successful because their manager ‘copied’ Pep Guardiola? Okay. This should be fun.

First of all – before we even read any of the actual piece – it is surely worth noting that Klopp did in fact win back-to-back Bundesliga titles with Borussia Dortmund so he does have some minor experience of building a successful side. It’s not like he is some bum who lucked his way into the Liverpool job and then decided that copying the best manager in Europe was the safest route to silverware. If it were, then why wouldn’t everybody simply do the same?

‘The narrative of this season’s title race has already been written – grand old Liverpool, steeped in history and tradition, conquering the dirty oil money of shallow, plastic Manchester City.

‘The fact that the tribe of media punditry is teeming with former Liverpool players has set that skewed narrative. But it simply isn’t true, whichever way you look at it.’

That’s one hell of a straw man you are fighting, fella. We’re not sure we have seen a single person – former Liverpool player or otherwise – painting this as a victory for tradition over money. Indeed, the only recent Google match for the phrase ‘grand old Liverpool’ is this piece. And the only match for ‘shallow, plastic Manchester City’ is this piece, too. Most are too busy marvelling at the mastery of this extraordinary Liverpool side to talk about any other narrative barring the end of a 30-year wait for the title. Largely because, well, it hasn’t actually been a ‘race’.

‘No-one should take away from what Liverpool have achieved – they are a brilliant team, the best in the world right now, and their brand of high-tempo, high-quality football has set a new bar so far this season.

‘Their coach has done a magnificent job of building a team and getting them toned and tuned to near-perfection.

‘But the likeable Jurgen Klopp has only become successful after tearing up his blueprint, dropping his principles, and following the example of Pep Guardiola.’

Except for all that success with Borussia Dortmund, you mean?

‘Three years ago, Klopp was sniffily having a pop at Manchester United for spending £89million on Paul Pogba, declaring he would walk away from football if it boiled down to spending big in order to win.

‘Roll on a couple of years, and Klopp was happily overseeing the biggest annual transfer spend in British football history, as the best part of £240million gave him Virgil Van Dijk, Fabinho, Naby Keita, Alisson, and Xherdan Shaqiri.’

Sorry, what? We have to stop you there because you appear to have discovered a whole new way of measuring transfer spend: the never-spotted ‘annual transfer spend’. We cannot stress enough that THIS IS NOT A THING.

And even if it were a thing, it would mean nothing without the perspective of other ‘annual transfer spends’ – like £80m in 2017 and absolutely nothing in 2019 for example. That one in particular seems more instructive.

And it means even less without the perspective of Liverpool actually receiving over £150m in their – fine, we’ll play this game – annual transfer sales of 2018.

‘No quibble with that – all good buys, who have not only added value to the squad but have also increased their individual values on the transfer market.

‘Asked to explain his quite stunning U-turn, Klopp was, at least, honest, saying: “Did I change my opinion? Yes. It’s better to change your opinion than not have one at all. That’s a problem, whatever bull**** you say, no one will forget it.

‘”It’s still kind of true. I couldn’t have imagined the world could have changed. £100million was a crazy number but since then the world changed.”

‘So it was a huge change of mind and heart which turned Liverpool from contenders to Champions League winners and now Premier League certs.’

Well kind of. It’s true that Liverpool spending money did accelerate their progress but there are more than a few other factors: magnificent coaching, excellent scouting, extraordinary work in the transfer market to generate funds. They did spend significant money in 2018 but in the previous 18 months before the purchase of Virgil van Dijk, they had spent around £155m to City’s £368m. It was from that position of relative parsimony that they broke all those ‘annual transfer spend’ records.

In fact, in the four years since Guardiola took over at Manchester City in 2016, their spending has exceeded Liverpool’s by around £300m. Factor in incoming transfers and that figure rises to about £450m. To suggest that Klopp’s Liverpool are only winning the Premier League because they ‘copied Pep Guardiola’ is ludicrous.

‘Guardiola never had such noble pretences. He has always been up front about his position – he needs the best players in order to play the highly technical brand of football he loves. And the best players cost money.’

‘City have spent big under Guardiola, but since Klopp’s spectacular U-turn, there is little difference between the two – Liverpool have coughed up about £236million and City around £244million.

‘That alone is an admission that to be the best, you have to spend bigger than the rest.’

Or alternatively, to be the best in a financially skewed competition, you have to spend significant sums – which you should try to part-fund yourselves through player sales – to compete with those who have already spent the equivalent of the GDP of Tonga.

Pay Jude
It’s rare that we feel sorry for a Sun journalist, but Charlie Wyett has clearly put in an awful lot of time and effort into writing extensively about Birmingham youngster Jude Bellingham for his newspaper in a slow winter break.

And how is this sold on The Sun website?

After all, what’s more fun that speculating about what a child could earn?

Mock the weak
Pity party over because this is just bizarre from Paul Jiggins in The Sun. In a quest to find a news angle, he has seen this tweet…

We heared, he is headed towards #Tottenham though …

…and arrived at a place where ‘RB LEIPZIG have mocked Tottenham ahead of their Champions League crunch clash. The Germans lit the fuse for next week’s last 16 first leg in London by joking leading scorer Timo Werner will be joining Spurs this summer.’

Apparently, ‘Spurs refused to comment on the tweet but the dig at their failure to sign a striker has not gone down well at the North London club.’

What’s £7m between friends?
‘FRANK LAMPARD is ready to relaunch his bid for £45million Ajax star Hakim Ziyech. Chelsea boss Lampard was left hugely frustrated when the club failed to land any of his transfer targets in January – including midfielder Ziyech’ – Andrew Dillon, The Sun, February 12.

‘FRANK LAMPARD has closed in on his first major signing as Chelsea boss – with Hakim Ziyech joining in a £38million deal…as SunSport told you yesterday’ – Andrew Dillon, The Sun, February 13.

Correction: As The Sun sort of told us yesterday…

Quiz question of the day
How did the Daily Mail’s Ian Herbert arrive at these paragraphs barely a column into his piece about the Glazers at Manchester United?

‘There were certainly grounds to leave things alone when Gill and Sir Alex Ferguson navigated the ship in the first eight years of Glazer command.

‘Consider, for example, the legendary quiz nights at the team hotel which always took place on the eve of European away matches.

‘Set by the club photographer John Peters, they were monumentally competitive, with Nicky Butt and Roy Keane incandescent with rage if they felt they had been wrongly denied points.

‘They reflected the extraordinarily tight nature of a club in which everyone understood the question-master’s sometimes obscure references to British life and culture.

‘It was around 2008, when the team become more multi-national and some players did not understand the questions, that the quizzes were faded out.’

And with that, the quizzes are never mentioned again, as if they have absolutely done their job of illustrating Herbert’s point. And perhaps they have – in his head, at least.