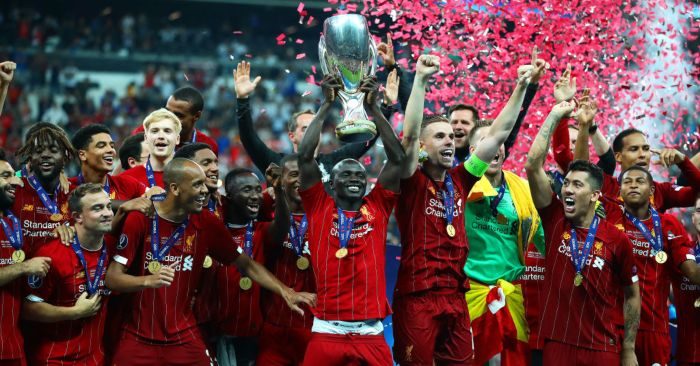 Liverpool > Manchester United
Think the Super Cup is basically pointless? Think it is a glorified friendly? Well, think again – especially if you are a Manchester United fan – because the Reds’ triumph over Chelsea on penalties on Wednesday night has absolutely relegated United into second place in the entire history of football. Here, look:

You literally cannot argue with the logic of the Liverpool Echo; Adrian saving a penalty from Chelsea’s Tammy Abraham has made Liverpool the best team of all time. It is irrefutable.

‘Before Wednesday night’s game at Besiktas’ Vodafone Park – and yet another night of shoot-out glory for the Reds in Istanbul some 14 years on from their amazing comeback at the Ataturk Stadium (also the venue for next year’s Champions League final) – Liverpool shared top spot on the honours board with their bitter rivals Manchester United having secured 45 pieces of silverware each.

‘However, thanks to new goalkeeper Adrian’s penalty heroics, the Reds have now returned to first place in their own right with 46 ‘major trophies’ won.’

The use of quote marks around ‘major trophies’ is excellent, by the way. If Chris Beesley genuinely believed that the Super Cup was a ‘major trophy’, there would be absolutely no need for the quote marks. They are there because he absolutely knows this is bullsh*t designed purely to generate clicks.

So what are these ‘major trophies’?

‘Charity/Community Shields are not counted on this list as they have often been shared in the past and although they count as official appearances in the record books, they maintain a somewhat ambiguous quasi ‘friendly match’ status.’

Or, alternatively, Charity/Community Shields are not counted on this list as Manchester United have won more.

How bizarre that the Community Shield (which Liverpool lost) ‘maintains a somewhat ambiguous quasi ‘friendly match’ status’ but the Super Cup (which Liverpool won) is absolutely serious and definitely not friendly at all.

It’s especially odd as Beesley himself counted it as a ‘trophy’ in June. And just last week he described it as ‘essentially being an English ‘Super Cup”. Unless you lose of course, at which point it basically becomes a crock of sh*t.

Hi ho silver
If you think that piece is cynical, look at talkSPORT and their attempt to garner some Liverpool/Man United cross-over traffic this Thursday morning:

‘REVEALED: Which English football club has won the most trophies? Liverpool join Man United on top of table after winning Champions League’

They won the Champions League over two months ago, fellas.

And they obviously don’t count the Super Cup, presumably because it ‘maintains a somewhat ambiguous quasi ‘friendly match’ status”.

Capital gains
Remember when the Evening Standard was a London newspaper and then a London-centric website?

The top story on their football page at 11am on Thursday morning, after London club Chelsea lost the Super Cup on penalties on Wednesday night?

‘Liverpool ‘back on our perch’ after eclipsing Man Utd trophy record’

Stir it up
Did John Cross get a tad carried away in Istanbul? He writes for the Daily Mirror of ‘another night of European glory in Istanbul‘:

‘It was a marathon night for Liverpool as, just like in the Champions League final of 2005, they staged a stirring fight back, took it to extra-time and won yet another European trophy.’

Girl power
“It’s gone to extra time for her as well. The pace will be quicker in the men’s game but she’s kept up and done an excellent job” – Glenn Hoddle on BT on Super Cup referee Stephanie Frappart.

She ‘kept up’ even with tits?

Surprise surprise
There’s excellent news for £58m Chelsea signing Christian Pulisic – a ‘surprise starter’, according to The Sun’s Charlie Wyett – because ‘he now has every chance of starting for Lampard’s first game back at Stamford Bridge on Sunday’. Isn’t that really lovely for him?

Description of the day
‘Pulisic reminds me of Arjen Robben, you cannot stop him one-on-one because you don’t know which way he’s going to go and his pace is devastating’ – Tony Cascarino, The Times.

Surely Arjen Robben’s calling card is that you absolutely do know which way he is going to go and you still cannot stop him?

And we’re LIVE!
Modern media is obsessed with the idea of LIVE, of suggesting that their content could not be more relevant because it is LIVE; it is literally happening right now.

The Sun football website loves this LIVE notion, and is running LIVE blogs from every major Premier League club, regardless of whether there is any new information or – more likely – not.

Which is how we arrive here…

Hmmm. Who to believe?

Break away
The Sun’s Mike McGrath is on fire with this Manchester exclusives, mind. Like this one:

‘SERGIO AGUERO and David Silva have been given permission to break away from Manchester City’s title bid and play in Vincent Kompany’s testimonial.’

They will play for 15 minutes each. It’s in the international break. Their actual manager will be in the dug-out. They’re not ‘breaking away’ from any damned thing.

Tell me why…
‘Why Fred’s Manchester United task is not as difficult as it seems’ – Manchester Evening News.

Is it because Manchester United have a sh*t midfield?

Yes, it’s because Manchester United have a sh*t midfield.

Great Scott
In that incredibly insightful article about why Fred’s task is really not that difficult, Scott McTominay is described by Liam Corless as ‘just about a guaranteed starter’.

Just one hour later, the Scot has been fast-tracked by Corless’ colleague Richard Fay to being ‘a future club captain’.

‘Whereas before it seemed McTominay was in the United team to fill in a gap, he has (sic) now one of the players who Solskjaer will trust the most.’

What a difference an hour can make.

Recommended reading of the day
Phil Hay on Eddie Nketiah, Leeds and the Arsenal process (£)

Ryan Baldi talks to Kevin Phillips about the art of finishing