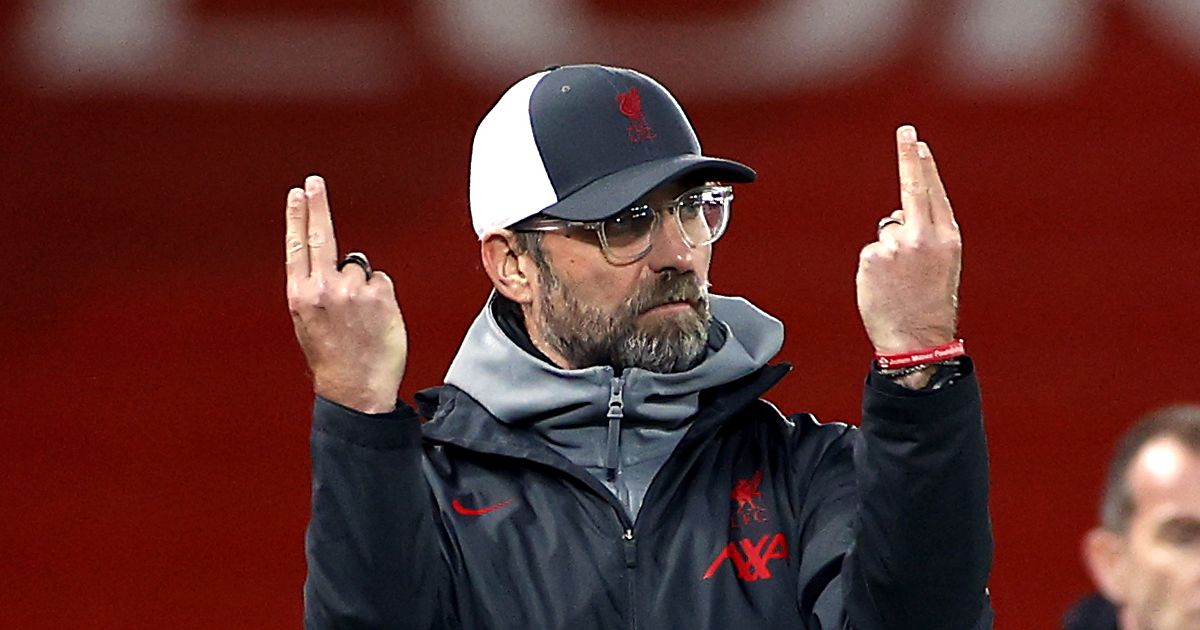 Stan Collymore thinks ‘work’ is keeping Liverpool manager Jurgen Klopp from returning to Germany to mourn the passing of his mother. Erm…

Riyad to nowhere
After the classic that was ‘Riyad Mahrez’s wife, 28, claims she was ‘fined for being too hot’ and asks lockdown raid cops ‘don’t you like to party?'”, a story that topped The Sun’s website on Monday lunchtime, comes Tuesday’s long-awaited sequel:

It really does need to be emphasised that this is the leading story on a football website at the busiest time of day for online traffic. And that Rita Johal and Riyad Mahrez are estranged. So ‘woman opens OnlyFans account’ is the biggest news story a day after two Premier League games and mere hours before the Champions League knockout stages commence. Lovely.

Decade and rotten
Stan Collymore is fearing for Jurgen Klopp and Liverpool in his Daily Mirror column, suggesting that failure to qualify for the Champions League this season would mean everything they have built towards recently will be ‘smashed to smithereens’.

‘Potential signings would think twice about moving to Anfield,’ he warns. Well in the summer of 2016, when they had no European football whatsoever to lure players, they signed Sadio Mane, Georginio Wijnaldum and Joel Matip. Each started in the Champions League final three years later and were regulars when they won the title the following season.

Klopp could probably cope with the worst-case scenario of not being able to attract players with Champions League football for one season.

‘And those already at the club — Mo Salah in particular — might find themselves wondering if the time is right for a change in the summer,’ he adds. Why ‘Mo Salah in particular’? Who knows. But the only Liverpool first-teamers whose contracts expire before 2023 are Wijnaldum and the 35-year-old James Milner.

Klopp could probably cope with the worst-case scenario of some players considering their futures for one season but Liverpool still ultimately being in control of the situation.

FFS, FSG
Collymore is kind enough to at least tell Klopp ‘the solution’ to those issues.

They spent £72.7m in the summer of 2020. Manchester United spent £63m. Can you go a week without suggesting Liverpool have to potentially knacker their finances in a global pandemic just to cope with a spate of injuries that will eventually subside?

All work and no play
Completing the hat-trick, Collymore is absolutely right in stating that Jurgen Klopp ‘needs to be given time to take a break in the summer, to go home to Germany and be with his family and regroup’. Spot on.

But this is not a case of ‘work keeping you in another country at a time when a loved one has died in your homeland’. This is a case of Germany imposing travel restrictions on those countries affected most by the current health situation. Nothing at all to do with his ‘work’.

‘He needs to be honest with himself about whether or not he can get out of his players what he needs to in the next week or so in his current mindset.

‘And I’d even be looking to see if there was a way he could get back now, even if it’s just for a few days, if the answer is that he can’t.

There isn’t a way Klopp could get back now without contravening restrictions. It’s a really sh*t situation but there’s nothing anyone can really do. Chances are that ‘work’ is actually helping take his mind off stuff. And Mediawatch sincerely doubts that Liverpool would force him to keep managing them if he requested time away.

Boiled Rice
The idea that Declan Rice has ever pulled rank on anything other than his international prospects for Ireland is laughable. So seeing The Sun claim that he ‘hilariously taunted’ Jesse Lingard after ‘pulling rank’ to take a penalty for West Ham is a little strange.

First off, it was West Ham’s first penalty of the Premier League season. They had no official, recognised taker. Mark Noble, Michail Antonio, Marko Arnautovic and Andre Ayew had taken their last 12 between them. Manuel Lanzini had taken the most recent penalty of any West Ham player on the pitch at the time. That was in November 2017. He also missed. There was no rank to pull.

But also, Rice is the club captain and Lingard is a loanee. It would have been a surprise if the former didn’t take precedence over the latter, before that hilarious taunt of ‘he knew he had to give me the pen’. Iconic.

Down and doubt
There seems to be stock in pretending that people are about to leave Manchester United. Funny, that.

First, the Daily Express website reported that Bruno Fernandes was ‘stalling on a new contract’, despite his current one having four more years and the option of another 12 months on top of that to run.

Then The Sun made out that Edinson Cavani and Juan Mata’s futures ‘were in doubt’ because the club were ‘yet to activate one-year extension clauses.

And now the Daily Mirror want us to believe that ‘Ole Gunnar Solskjaer has thrown doubt over his Manchester United future after admitting nobody has spoken to him about a new contract’.

They do at least have quotes from the manager himself, although a hell of a lot of conjecture is required to get from “I have not thought about that, and we have not discussed it at all” to ‘casts doubt on long-term Man Utd future with contract admission’.

It would be a shock if Solskjaer and United had negotiated new terms mid-season. They could theoretically finish first or they could come bloody ninth. They might win a trophy. What sensible club and manager holds contract negotiations in those circumstances?

Recommended reading of the day
Andy Brassell on Dayot Upamecano.