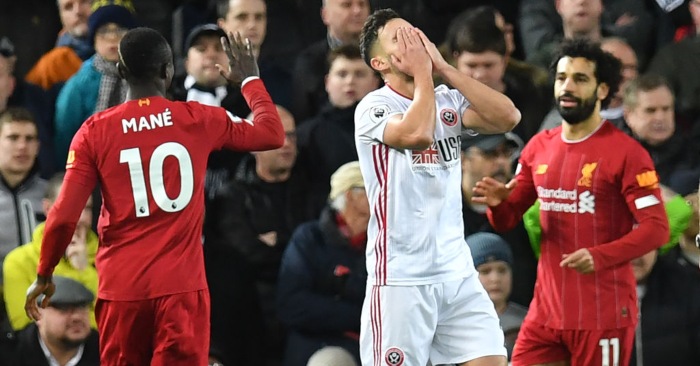 Slip not
The best thing we can say about The Sun’s Paul Jiggins is that he commits to a theme. Once Sheffield United’s George Baldock had slipped in the fourth minute of Liverpool’s clash with the Blades, he had his ‘line’. And once a comedy Cockney has his line, he is not letting go. Just ask Jim Davidson.

So never mind that Liverpool went on to dominate the game, enjoying 75% possession, having 19 shots and setting a new Premier League passing record. To Jiggins, it was all about the slip.

Which is why you get this frankly bizarre intro:

‘GEORGE BALDOCK, Baldock, he slipped on his flipping a**e,

‘It was gifted to Mo Salah, George Baldock, Baldock…

‘THE unfortunate Blades defender exorcised the ghost of Steven Gerrard as his stumble helped nudge Liverpool closer to their first title in 30 years.

‘Baldock’s slip gifted Salah the Reds’ opener after just four minutes as they made it a year unbeaten in the League.

‘And Gerrard can breathe a huge sigh of relief as the incident evoked memories of his Anfield slip which gifted Chelsea’s Demba Ba a goal in 2014.’

It really didn’t. Because that was a slip in one of Liverpool’s final league games of the season which basically took the title out of Liverpool’s hands. It was devastating.

And the idea that Gerrard will have been relieved to see Baldock slip because that somehow ‘exorcises’ the mistake that potentially cost him the only Premier League winner’s medal of his career is just barmy.

‘Blues fans still sing about it to this day and you can bet Kop fans will adapt it to Baldock after this.’

You can bet Kop fans had pretty much forgotten the name of George Baldock by Friday morning. It’s only significant in your head, fella.

‘It makes you believe the football Gods have finally given their blessing for Kop to seal their first top-flight crown since 1990.’

The ‘football Gods’? They are 13 bloody points ahead in the Premier League title race. That’s got nothing to do with superstitious clap-trap and everything to do with having a fantastic football team.

Conclusion: You really can write what you want when no Liverpool fan reads your comic.

Perspective
Interestingly, the Daily Mirror’s report from the game only mentions the slip in the 11th paragraph of their match report, while the Daily Mail waited until the 12th. Maybe it’s easier to grasp the importance of an incident if you’re actually allowed in the ground.

Another setback – losing Naby Keita to injury in the warm up – and another strong reaction from #LFC. This steel underpins why it is a whole year – a whole 37 league games – without defeat for themhttps://t.co/Im4gi8QgOi

‘Another setback’? They lost their sixth-choice central midfielder.

As the injuries stack up, so do the wins. A year without defeat in the league, a team without equal right now. #LFC https://t.co/sV2HHfiaBT

‘As the injuries stack up’? Against Sheffield United they literally played nine of the XI that started the Champions League final. They might just about cope against all the odds.

It ain’t over ’til it’s over
The last time The Sun’s Neil Custis and Richard Moriarty claimed an ‘exclusive’ from inside the Manchester United dressing room, their story was dismissed as ‘blatant lies’ by Ole Gunnar Solskjaer, so we’re already taking their back-page claim about Paul Pogba‘s Manchester United career being over with a large handful of sodium chloride.

And then there’s the small matter of Custis having been here before. Back in September 2018 we were told that ‘it is the beginning of the end for Paul Pogba at Manchester United after latest collision with Jose Mourinho’. How long is the ‘end’? We’re 16 months in and counting.

Here’s what Custis wrote way back when this elongated ‘end’ was just beginning:

‘You don’t question the boss, not one as good and powerful as Mourinho.

‘Now surely the exit door that was creaking open is now hanging off it’s hinges with Barcelona waiting to pounce.’

Even if we ignore the errant apostrophe, that was spectacularly wrong. Within three months, the exit door swung open and that ‘good and powerful’ boss was pushed out. A few months later, Pogba was named in the PFA Team of the Year.

Then in the summer, Custis was absolutely certain that Pogba was on his way out once again. And he was so sure that he went on talkSPORT in July and raved:

“Paul Pogba will go down as the most disliked Manchester United player of all time.

“Pogba and his agent have engineered a situation where it simply just can’t go on.

“Come the start of next season, if he’s in a Manchester United shirt, he’s going to be booed every time he touches the ball – and that’s by the home fans!”

That wasn’t really true, was it? What actually happened is that Pogba stayed at Manchester United, created two goals in the opening-day 4-0 win over Chelsea and absolutely was not booed by the home fans.

Or, as Custis himself wrote just a month after saying that “it simply can’t go on”:

‘Paul Pogba got his head down and got on with it and impressed Solskjaer with his attitude against a backdrop of uncertainty after he claimed he needed a new challenge.’

So yes, excuse us if we wait to see whether there is ‘no way back for the Frenchman’ at Manchester United.

Pizza the action
On the inside pages of The Sun, Dave Kidd also writes about the ‘fiasco’ of Paul Pogba and Manchester United, beginning his piece in bombastic fashion:

‘BULLIED on the pitch by a team which had not won a home league game in three months.

‘Bullied off the pitch by a former pizza restaurant waiter who controls the destinies of their prized asset and the lad who was their No1 January transfer target.’

Far be it from Mediawatch to defend a football agent but Mino Raiola was a teenage waiter in his dad’s restaurant. Just like the teenage offspring of every restaurant owner since time began. Using that as an insult to a man who can speak seven languages is offensive, borderline xenophobic and just plain weird.

Talkin’ bout a revolution
We covered this at length on Thursday but we have to cover the same ground again on Friday as the Daily Mirror’s Darren Lewis has taken up the mantle of praising Mesut Ozil based on a lazy misunderstanding of statistics, which is ironic as he is trying to disprove the theory that the German himself is lazy.

Pesky fact (1): Ozil actually made just one key pass against Manchester United, which ranks as his joint-worst creative effort of the season.

Pesky fact (2): Ozil actually made just one tackle against Manchester United, which put him joint-last in that metric in Arsenal’s starting XI.

‘HE is emerging as the symbol of the Mikel Arteta revolution.

‘Mesut Ozil’s performance in Arsenal’s 2-0 win over Manchester United was among the midfielder’s best for 18 months.

‘The former Germany international played the entire 90 minutes and completed 42 of his 49 attempted passes. Seven of those were key passes in the final third, leading to chances for team-mates.’

Nope. What you’ve done there is confuse ‘passes into the final third’ with ‘key passes’. Easily done if you have not been paying attention over the last ten years.

Handily, the Mirror have included a stats box to make themselves look utterly ridiculous, comparing Ozil’s contributions under Arteta with those under Freddie Ljungberg and Unai Emery.

So it turns out that the ‘Mikel Arteta revolution’ has made him recover the ball 5.55% quicker than under Ljungberg, tackle about 41% less than under Emery, be significantly less successful in ‘duels’ than under either previous Arsenal manager but foul considerably more.

But sod the facts, all the British media wanted all along was to see him f***ing running around a bit.