Home Mediawatch A ‘ridiculous’ idea and a crushing ‘blow’ for Liverpool 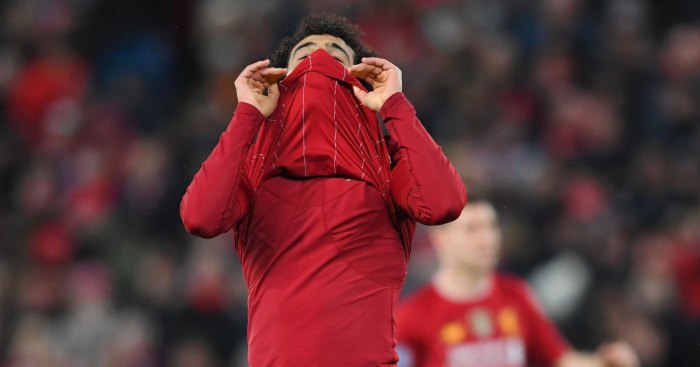 My sacrifice
After the ‘f@@@@@g cheek’ of Health Secretary Matt Hancock on Thursday evening, it stands to reason that football journalists would weigh in.

Mark Irwin of The Sun suggests players ‘are coming across like Goodfellas mob boss Paulie leaning on struggling restaurants.

Irwin himself admits ‘the reality is very different’ in the very next line. Which begs the question as to why the rather unhelpful comparison is made at all.

‘Hundreds of players have been making charitable donations and are helping out with community projects during this time of national emergency,’ he adds.

Over to Ian Herbert of the Daily Mail, who points out that ‘the genuine acts of sacrifice are the ones there is little song and dance about’, before suggesting that ‘such acts are pitifully thin on the ground’ in the very next paragraph.

Quite how he knows is a mystery. If ‘there is little song and dance about’ them, how do can you say for certain they aren’t happening?

Can and should footballers do their bit, much like everyone else? Absolutely. Are they an easy target? Of course. Could certain journalists do a little less to add fuel to the fire? Always.

Poppycock
Martin Samuel’s Daily Mail column is a wonderful evisceration of the ‘deluded’ PFA chairman Gordon Taylor. But one paragraph stood out:

‘Unless footballers are allowed to demonstrate some understanding of the pain the country is felling, when the game returns the appetite for it will be roughly on a par with cock-fighting.’

That’s just not true, is it? It will remain the most popular sport in the country. The overall reputation of footballers would certainly suffer but the public perception was hardly favourable before the pandemic anyway.

‘Liverpool boss Jurgen Klopp has told his players to forget about the title and focus on their families instead.’

As ever, Daily Mirror: if the opposite is a bigger story, it isn’t back-page news. Come back to us when Virgil van Dijk says Klopp has told Liverpool players to forget about their families and focus on the title instead.

Barnes stormer
Klopp and his Liverpool squad would be advised not to visit the Daily Mirror website in that case, for they would soon be greeted by the following headline:

Oh good. Because what this situation needs is more opinions from people who won’t be at all involved in the actual decision.

Let’s see if John has a fresh take to offer. Spoiler: he doesn’t. No-one does anymore.

“A lot of people are looking at it quite binary saying: ‘Liverpool should just be given the league title’ because they’re 25 points ahead. But for the integrity of football it is important that the season must be finished.”

Agreed. And by all accounts that is the preferred course of action. But only when it is safe and reasonable to do so.

That sounds more like an argument against cancelling the season than anything else, but carry on.

“It wouldn’t make sense (to award Liverpool the title) because a team in the Championship might say, ‘Well we were 15 points ahead, why aren’t we getting promoted?'”

They might. Except there is no team 15 points ahead in the Championship. Leeds are ahead of third-placed Fulham by less than half that much with more games to play than in the Premier League. And Liverpool’s lead is 25 points, not 15.

What will come first: either the resumption or voiding of the current season, or the point at which every possible person has been asked for their opinion on it?

Low blow
By this headline on the Daily Express website, it will be a close run thing:

A player from Liverpool’s only title rivals airing their opinion that the Premier League should be CANCELLED? How ever will the current leaders recover from this ‘blow’?

The boy who cried Wilf
Elsewhere on the Daily Express website, they claim that Manchester United might consider ‘activating their buy-back clauses on Memphis Depay or Wilfried Zaha’ as a cheaper alternative to Jadon Sancho.

That’s all well and good, but United have no buy-back clause over Zaha. And Depay suffered a knee injury in December that is expected to keep him out until at least July. And neither are likely to jump at the chance to return to the club they notoriously struggled at before.

Cut my life into pieces
The Sun website, meanwhile, believe this to be the biggest story at lunchtime on Friday:

‘A joint letter to all leagues and clubs confirms that finishing the campaign despite the coronavirus crisis is the collective aim of European football.’

‘But the letter, co-written by Uefa President Aleksander Ceferin, Juventus President Andrea Agnelli in his role as head of the European Clubs Association and Lars Christer Olsson of the European League umbrella group, concedes that it may not be possible for the campaign to be played to a finish.’

‘”Stopping competitions should really be the last resort after acknowledging that no calendar alternative would allow to conclude the season.”

‘That last point represented the first official recognition by European football that completing the season may not be feasible.’

I mean, it’s more ‘we’ll cancel the season if there is literally no possible alternative’ than it is ‘the first official recognition by European football that completing the season may not be feasible’. But whatever floats your boat.