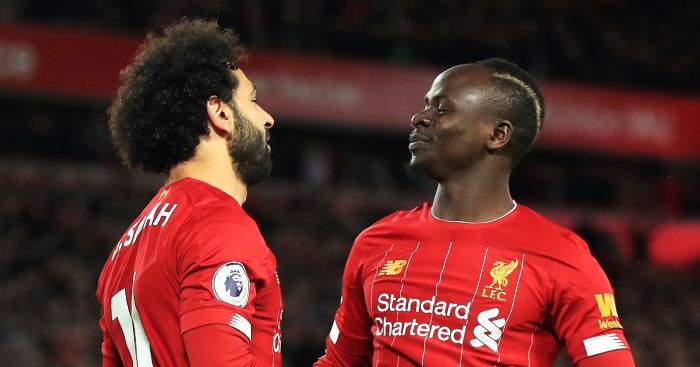 It is a wonder Liverpool are so good when two of their players apparently despise each other.

Curt nod
Curtis Jones was pretty bloody good for Liverpool on Tuesday. But David Maddock has to go and ruin it for the Daily Mirror.

‘The 19 year-old Jones scored a sublime goal against stunned Ajax, and produced a wonderfully mature display to put his side through to the knock out stages of the Champions League.’

Absolutely right. No problem there.

‘And in the process he grabbed a small milestone, as he scored the 50th Champions League goal of the Klopp’s Anfield reign making it a perfect night for the German boss.’

That is not a thing. Not even the Klopp himself would know or care about the that.

Fortune cookie
As for ‘Klopp will hope that goal signals a change in fortune for his side’, is a run of one win in four games really worthy of suggestions that a team level on points at the top of the Premier League table and first in their Champions League group was even slightly struggling?

Liverpool only lost one of those other three recent matches – a result that has not even slightly affected their position whatsoever – drawing against their main title rivals and then in stoppage-time to a questionable penalty. That does not sound like a team that requires ‘a change in fortune’ any time soon.

Kell of duty
Writes David Facey in his report for The Sun:

‘The pre-match talk had centred around Liverpool’s choice of goalkeeper, with Caoimhin Kelleher given a shock Champions League debut.

‘First choice Allison was ruled out by a slight hamstring strain, and Klopp said he had decided to play Kelleher ahead of usual stand-in Adrian because the Irish keeper is “a good shot-stopper”.’

And because Kelleher is “a football-playing goalie”, as Klopp explained pre-match before elaborating afterwards that it was important due to “the pressing of Ajax”. But no, let’s pretend Adrian is just plain rubbish.

Salah dressing
When Mo Salah committed the egregious offence of being a striker and deciding to try and score instead of passing to Sadio Mane against Burnley in August 2019, he likely did not expect the ramifications to last well into December 2020.

Yet here we are, with the Daily Mirror website still trying to stoke embers that have been pissed all over for the past year and beyond.

Not to forget Goal.com‘s own effort.

The extent to which Robertson has ‘lifted the lid’ is to tell the Liverpool Echo‘s Blood Red Podcast two days ago that “their relationship is really strong” in response to a question not only about Salah and Mane but also Roberto Firmino. So the entire Liverpool attack and not just two players who clashed very briefly ages ago and immediately put it behind them to win a Premier League title.

Jordan Henderson said Mane “was laughing and joking” in the dressing room in a post-match interview after that Burnley game. Jurgen Klopp added that the situation was “clarified” instantly. Mane stated a fortnight later that it was “forgotten” and the pair had “reconciled”. Salah posted this video soon after, such was the intensely bitter nature of their feud.

They have started 43 games together since. They have scored a lot of goals and – are you sat down for this? – even assisted each other. Yet people are still warning a pair of clearly well-functioning teammates not to ‘sacrifice’ each other, with others pretending there is a ‘rift’ to justify the vaguest semblance of a story to ‘lift the lid’ on.

It was in August 2019. It was sorted pretty much straight away. It is now December 2020. Everybody move on.

A fish called Wanda
A job’s a job, particularly in this day and age, but shout out to Jon Boon for committing these sentences to print in an article for the supposedly entirely serious Sun website (for a story that handily has ‘sexy’ and ‘nude’ in the URL):

‘Like any self-respecting Wag, a summer holiday is important for Wanda.’

‘Wanda is a master when it comes to showing off her incredible body. And she always gets its right when she models underwear.’

He’s done bloody well to type all that with just one hand.

Less is Maur
That story is inexplicably not top of The Sun website. Instead, there is news from Spain.

Pochettino? That name does not ring a bell. No idea who that is. A youth coach at Real, perhaps? Really struggling with that one.

Oh, hold on…do you mean ‘the Argentine Alan Curbishley’? Someone who was ‘in danger of becoming the forgotten man of football’? This fella?

Mark Irwin of The Sun wrote that in August. Four months later he is being eyed up by Real Madrid. You silly sod.

How MailOnline got Hakim Ziyech to ‘admit’ to drawing “inspiration” from a footballer who was really quite brilliant for his current club is a mystery.

Recommended reading of the day
Melissa Reddy on Caoimhin Kelleher.