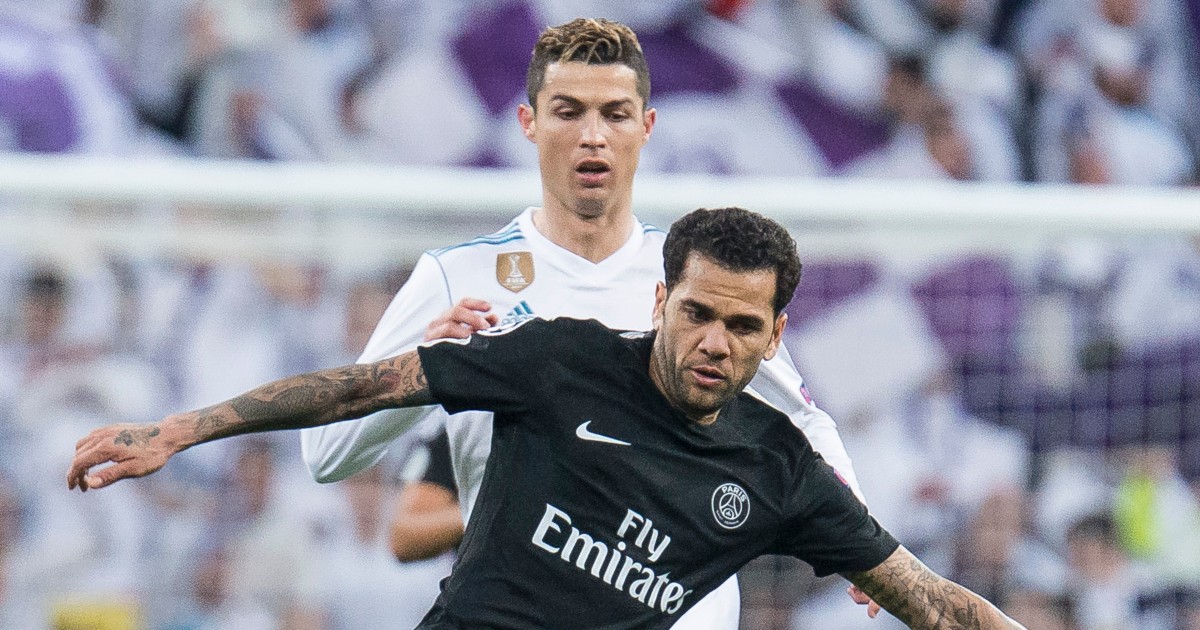 Dani Alves is pretty much the exact same as Cristiano Ronaldo because he is also in his 30s. Liverpool could sign him. They won’t, but still.

Mo Salah, mo problems
Stan Collymore always speaks his mind and that is bad news for Manchester City on Tuesday: he is ‘starting to wonder if they spent their £100million on the wrong England superstar in the summer when they snapped up Jack Grealish.’

The same Jack Grealish who has two goals and two assists in six Premier and Champions League starts so far this season, presumably.

But the Daily Mirror columnist might have a point in suggesting Manchester City would have been better off signing Harry Kane (and his zero goals from four Premier League shots in as many games so far this season).

What is strange is the argument he deploys to make the case:

‘Liverpool’s strikers – Mo Salah, Sadio Mane, Roberto Firmino and Diogo Jota – have scored in each of their five Premier League games, with 10 goals between them.

Three. And also Liverpool have scored 12 Premier League goals this season in comparison to City’s 11. It hardly matters how they are shared out when the overall club tallies are so similar.

‘While it’s still early days, Torres and Jesus have to at least stay level with the Liverpool lads to make the superiority their side have over the Reds in terms of midfield creativity count.’

Two players keeping up with four in terms of goal output is definitely a fair expectation. If only there was recent proof that no Manchester City player has to ‘at least stay level’ with Liverpool’s forwards in terms of goals if they are to have a successful campaign.

Apropos of nothing, Mo Salah finished last season with eight more goals than Manchester City’s highest Premier League scorer, and at least twice as many as every other player. But someone will definitely have to ‘stay level’ with the Egyptian if they are to close the current three-point gap.

Dani, are you OK?
Manchester City might as well give up trying when you consider that ‘Liverpool can still sign their own Cristiano Ronaldo for free’.

An elite goalscorer brought in at no cost outside the transfer window? The Liverpool Echo have uncovered quite the scoop here.

There is a slight problem in that the article itself contains a single mention of Ronaldo. In the space of 1,563 words, he is named literally only once yet is given URL and headline treatment.

That is fine. Clicks are currency and Mediawatch knows that all too well. But then you realise that Liverpool’s ‘own Cristiano Ronaldo’ is apparently Dani Alves and wait what do you mean that is absolute nonsense.

What makes free agent right-back Alves even vaguely comparable to Manchester United striker Ronaldo? They are both in their 30s. They are essentially brothers.

And yes, Liverpool can sign him. But will they?

‘Admittedly, the thought of Liverpool signing Dani Alves on a free to serve as an alternative to Trent Alexander-Arnold doesn’t seem a particularly realistic one.’

‘There would be some supporters who would be tempted by the possibility of the veteran sharing his experience at Anfield and potentially adding to his haul of 43 trophies.

‘Yet don’t expect Klopp to be one of them.’

Prove along
Then you head to the Daily Mirror website to discover that ‘Jurgen Klopp still needs to prove he can handle Carabao Cup commitments at Liverpool’.

Not sure a Premier League-winning European champion manager has much to ‘prove’ in a competition that ranks a very distant fourth on his club’s list of priorities but go on.

‘Liverpool head to Norwich on Tuesday night looking to make a mark on the Carabao Cup, a box Jurgen Klopp is yet to truly tick,’ reads the first paragraph from Samuel Meade.

‘When Klopp was appointed back in late 2015 he quickly made his mark by taking Liverpool to the Carabao Cup final,’ reads the fourth. So is he still waiting to ‘make a mark’ on the tournament or did he ‘quickly make his mark’? Not sure both can be simultaneously true.

‘There they were undone on penalties by Manuel Pellegrini’s Manchester City and since then they’ve failed to really bother the latter stages of the competition.’

They reached the semi-finals the following season and the quarters in 2019/20. It isn’t a brilliant record but Klopp has demonstrably managed to ‘bother the latter stages’ at Liverpool and ‘make his mark’ on a competition that has a negligible impact on his future.

He did no such thing. He said that Antonio Rudiger “has arguably been the best centre-back” – and this bit is crucial “since Tuchel has come in”.

Van Dijk has played five games since Tuchel was appointed Chelsea manager. Rudiger has played 32, been involved in 21 clean sheets and played the entire 90 minutes of a 1-0 win in the Champions League final.

It is less a ‘snub’ or a ‘shock’ and just a perfectly legitimate and fair opinion.

It turns out that ‘Ronaldo’s Man Utd impact’ will take them from runners-up last season to runners-up this season. It remains to be seen what the final Premier League table will be after Dani Alves’ Liverpool impact.

Big-time Charlie
‘Can Arteta ignore him for much longer? 17-year-old wonderkid Charlie Patino is tipped to be one of Arsenal’s best-ever academy graduates, so will he get a Carabao Cup chance this week?’ – MailOnline.

No idea. But not sure it’s fair to ask whether Mikel Arteta will continue to ‘ignore’ a 17-year-old who only made his debut at U23 level in January. Criticise the Arsenal manager for plenty of things but keeping the best long-term interests of an inexperienced teenager in mind is not one of them.