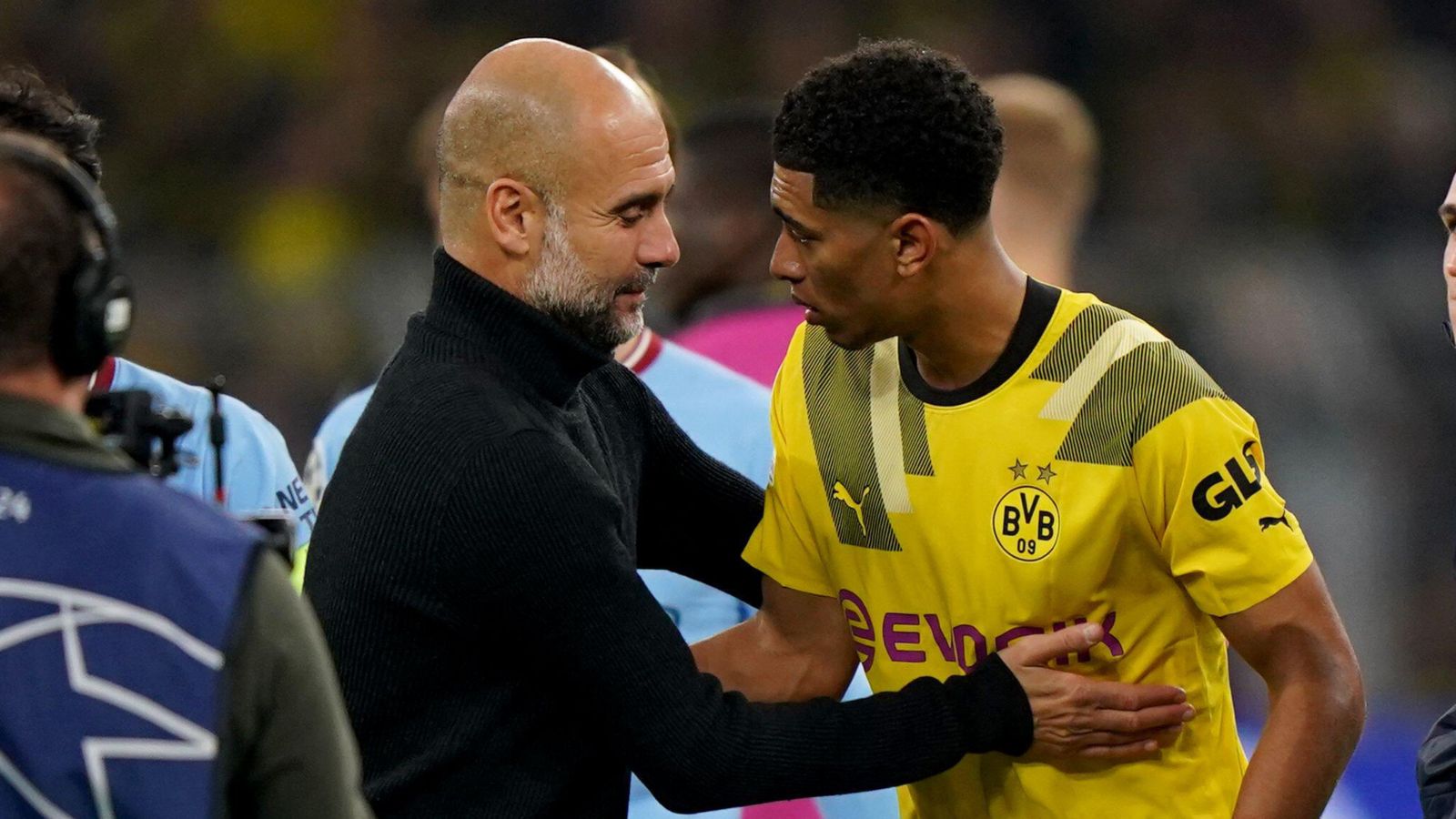 Liverpool have been given a shock hand from Man Utd in their pursuit of Jude Bellingham, while Mo Salah was ‘forced to apologise’ in training.

Steamtroller
For a team that has won only one of its last four games in all competitions, Manchester City are certainly treated weirdly every time they fail to absolutely hammer everyone they face.

Dave Kidd of The Sun is frantically rushing around trying to serve unevenly cut slices of humble pie to everyone he sees.

‘This match did not mean the world to Manchester City – as they were already assured of progress to the Champions League knock-out stages and a point confirms top spot.

‘But anyone who felt that City without Haaland would simply steamroller their way through England and Europe this season is having to think again.’

Yes, all those many people who thought Manchester City ‘would simply steamroller their way through England and Europe this season’ without their best striker, despite having summarily not steamrollered their way through Europe in particular before he joined, are now eating their foolish, naive words.

Influencer
Mediawatch deeply enjoyed this Sun website transcription of Pep Guardiola’s explanation as to why he substituted Erling Haaland at half-time against Dortmund:

“Three things. I saw him so tired. Second one, there was a bit of influence (fever) in his body. And the third he had a knock in his foot. That is why he was unable to play in the second-half.”

So you’re happy to go with “influence (fever)”, yeah? It’s late, your shift ends soon and you’ve got to rush to catch the bus. That’ll do. The stuff in the brackets makes it clear enough. Log off. See you tomorrow.

Here is what BBC Sport heard Guardiola say during that post-match press conference:

“Three things. I saw him so tired. Second one, he had a little bit of influenza in his body. Like Joao – Joao had a fever. Then the third, he had a knock in his foot. That’s why he was not able to play the second half.”

Out goes the random hyphen in ‘second half’. In comes the rather more sensical mention of Haaland still suffering slightly from “influenza” as opposed to “influence”. Lovely.

Dylan Terry of The Sun noted that Potter used a sixth different formation for his ninth game in charge, and you already know what nickname is bestowed upon the boss:

‘CHELSEA have a new Tinkerman at the helm.’

Of course they do.

This line is a little weird, though:

‘And despite all of these nuance [sic] tactical changes from Potter, Chelsea are still yet to lose under the former Brighton man.’

‘Despite’ them? What a strange way of completely trivialising a manager’s impact and tactical acumen.

‘They are also in the market for another winger and are currently keeping track of Shakhtar Donetsk’s young Ukrainian international Mykhaylo Mudryk and Villarreal’s exciting 20-year-old Yeremy, who would both cost somewhere in the region of £25m.’

The absolute best of luck to Arsenal in their attempts to sign Mykhaylo Mudryk for £25m. Shakhtar rejected offers of around £26.1m in the summer as they valued the forward at closer to £43.5m. And that is before factoring in a mid-season sale and Mudryk’s form – six goals and seven assists in 11 Premier Liga and Champions League games – at the start of this season.

But no, £25m should definitely do it.

‘Villarreal president fires parting shot at Unai Emery after he left the LaLiga side to join Aston Villa… as Spaniard is accused of putting the club ‘on the back foot” – MailOnline.

Help to buy
‘Manchester United could help Liverpool sign Jude Bellingham despite reported £131m transfer fee’ is quite the headline to read on the Liverpool Echo website.

Why would Man Utd ‘help’ one of their most bitter rivals sign a wonderful player they are known to admire themselves?

And how will they ‘help’? Are they going to pitch in with the cost? Is the idea to distract Real Madrid by selling them Scott McTominay? We need answers.

That Man Utd aren’t even mentioned until the 13th paragraph bodes well – and when they are brought in to the conversation, it is obviously with regard to Jadon Sancho. Who will presumably also help Liverpool sign Bellingham.

Rather, the Echo suggest the asking price could come down because Dortmund wanted £85m for Sancho and settled at £73m as the winger ‘had long since had his heart set on the move’.

‘Interested clubs can learn lessons from this as a result when the time comes for Bellingham to move on. If Dortmund really don’t want to sell, then the player stays put unless he actually asks to leave.’

Perfect. Feels like Liverpool shouldn’t need to be taught that if Dortmund don’t want to sell someone, Dortmund won’t sell someone, but still. Also not entirely sure how it helps Liverpool sign Bellingham. But do carry on.

‘Sure, if Liverpool want Bellingham the chances are they will have to break their transfer record and could even part with over £100m on a player for the first time. But £131m, for example, does feel perhaps a little excessive. If United’s signing of Sancho is anything to go by, that speculated fee will go down.’

Bellingham is basically already doing the Melwood lean and signing his Anfield contract next to a gurning Jurgen Klopp. After all, he probably won’t cost £131m so all it will take is a club-record, likely nine-figure fee to get him. And it will all be thanks to Man Utd and Sancho.

Of course, the Echo are missing a quite vital component when comparing Man Utd’s signing of Sancho to Liverpool’s pursuit of Bellingham: there was no competition for the former, while everyone wants the latter.

Plus Liverpool are currently 8th and on course to miss out on Champions League qualification. Not sure Man Utd can ‘help’ with either sorting that or tempting Bellingham into playing in the Europa Conference.

Leading questions
‘Liverpool must cope without leading striker as two youngsters set for opportunity’ is another eye-catcher from the Liverpool Echo, particularly while Darwin Nunez is struggling with injury.

But the Uruguayan was back in training for the game against Ajax and is thus surely likely to feature. What’s happened? Has there been a setback?

Not exactly. Because that headline conveniently omits one key point: it has nothing to do with Klopp’s senior Liverpool side and is actually about the U19 team, for whom top scorer Oakley Cannonier will be unavailable this midweek due to injury.

Mediawatch particularly enjoys the mention of ‘two youngsters’ subsequently being ‘set for opportunity’. It’s the sodding U19s. They can’t replace him with Mo bloody Salah.

Mo problems
And to complete the Echo headline shenanigan hat-trick…

Was he really ‘forced to apologise’ or did he, in the words of Theo Squires, ‘chuckle before apologising’ to elite development coach Vitor Matos, who was hit in the back by a wayward pass from Kostas Tsimikas?