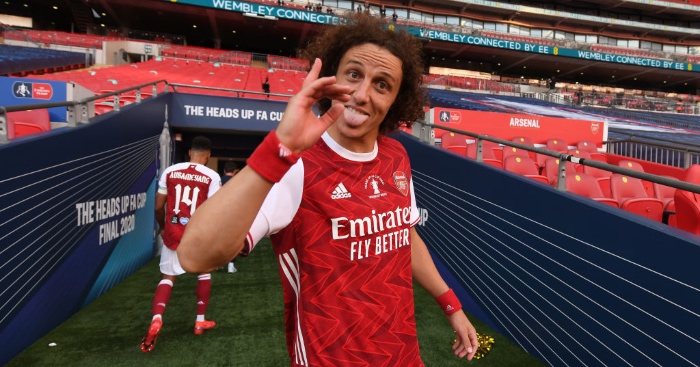 Taking Mik
Mikel Arteta was never likely to go into great detail with regards to whatever happened in training between David Luiz and Dani Ceballos during the international break. The fact it took almost a whole week for the incident to come to light says rather a lot about its severity.

“Training is very competitive and issues happen a lot of times,” the Arsenal manager said during a press conference on Friday. “Those things get resolved immediately within the team and there is not much to say. There is no problem at all.”

Bear those words in minds – particularly the final six – when you consider these reports on the matter:

‘Spanish ace Ceballos was left with a cut on his face from the Brazilian after they squared up last Friday at the club’s London Colney HQ’ – The Sun.

‘David Luiz took exception to a challenge by Dani Ceballos and retaliated by hitting him in the face, a scratch drawing blood. Luiz is said to have struck Ceballos on the nose’ – The Athletic.

A cut/scratch from a hit/strike. It sure sounds ‘sensational’. And it leads the Daily Mirror to…

Way to make a scratch sound like a round of boxing.

Mind you, that’s nothing on Eurosport:

Some slight artistic licence there.

Serg of adrenaline
The name of Tom Gott is not particularly familiar to Mediawatch. It is unclear who and how reliable his sources are. But we do know some of his exclusives for 90min this past year include:

‘Liverpool are set win the race to sign young Coventry City left-back Sam McCallum ahead of a number of Premier League rivals’ – December 15. He joined Norwich a month later.

‘Everton are looking to establish themselves as one of the Premier League’s elite, and they hope to get there by striking deals for Real Madrid winger Gareth Bale and Juventus midfielder Aaron Ramsey’ – March 31. They signed neither.

‘Chelsea remain interested in Burnley goalkeeper Nick Pope and they have stepped up their scouting of the Englishman in recent weeks’ – July 23. Nope.

‘Crystal Palace winger Wilfried Zaha is prepared to head to Ligue 1 this summer in search of more success, with Paris Saint-Germain and Monaco both keen on landing the Ivorian’s signature’ – August 18. Hmm.

Now they all might well have been accurate at the time. Things change, particularly when it comes to transfer rumours. But this is clearly not the sort of source a reliable, club-centric outlet should place too much emphasis upon when they presumably have well-connected journalists of their own.

Which brings us neatly to the Liverpool Echo‘s biggest story on the morning of this fine Friday. This headline sat atop their website until around 11am:

It’s very much standard fare: six paragraphs of bluster about Liverpool ‘reportedly’ being interested in Sergio Ramos; details of their injury problems; a link to the original 90min report; talk of Ramos having less than a year left on his contract. Then the kicker.

‘Never going to happen though, is it?’

That didn’t stop you pretending it might with a ‘Liverpool news and transfers LIVE – Sergio Ramos enquiry’ tease. The headline hardly suggests not to believe it.

Pearce keeper
Far lower down on the Echo’s website, this headline can be found:

As if gathering nine tweets to rubbish the story that remains top of your website is not bad enough, imagine the cheek of referring to one of your former journalists as little more than a ‘Liverpool fan’.

A lot of bullshit transfer rumours doing the rounds already ahead of January but this is right up there…. https://t.co/GmA5SWGCAz

They’ve missed a trick by not doing another story with an actual Liverpool journalist calling it ‘bullshit’. Silly.

Trev theory
Mind you, no source is better than this…

Pep talk
As for Pep Guardiola, how nice must it be to be paid so much that some outlets deem a difference of £5m inconsequential?

‘There is no pay increase on his £15million-a-year salary’ – Martin Blackburn, The Sun.

It really is so very weird.

Least surprising headline of the day
‘FRANK LAMPARD does NOT fear the sack at Chelsea despite admitting to making mistakes during his short career as a manager’ – The Sun.

You mean to tell us the manager of the team in fifth, with the most Premier League goals scored this season and only five teams conceding fewer, is NOT worried about being fired less than halfway into a three-year contract after also qualifying for the Champions League and reaching a cup final last season?

Is that the most obsolete use of the word ‘insists’ ever? It really might be.

Recommended reading of the day
Megan Rapinoe on taking a knee.