It was a wonder Harry Maguire and Marcus Rashford didn't need someone to split them up. 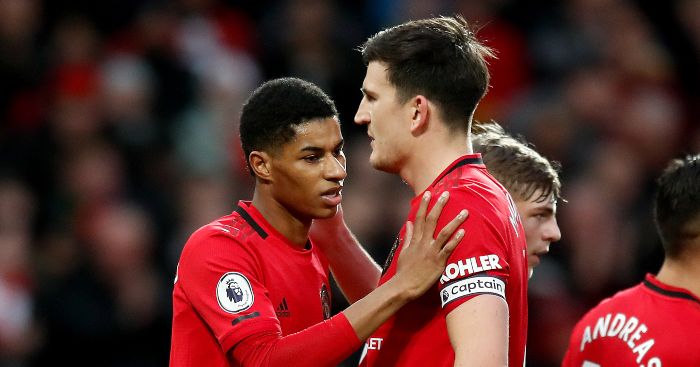 One incredibly fun aspect of the otherwise dreadful dystopia that is football without fans has been the ability to hear players yell at teammates for being a bit rubbish. Anyone who watches live matches with the artificial crowd noise is wrong and should be ashamed of themselves.

This global pandemic has been awful but without it there would be no Aaron Ramsdale almost murdering his entire Bournemouth defence for letting Mason Greenwood take a shot. So swings and roundabouts.

The Daily Mirror not only promises another example of the genre – it positively revels in it. This headline is top of their football website at Wednesday lunchtime:

Oh dear. How strange that it has taken two full days for an ‘on-pitch spat’ between a couple of players at one of the biggest clubs in the world during a chastening home defeat to surface. You’d think someone would have spotted such a remarkable bit of controversy earlier.

Then you read the transcript of this heated exchange:

Rashford: “Nothing for that elbow? Why? It’s the same.”

Maguire: “They’ve checked it, and said it’s not.”

Wow. It’s a wonder they didn’t need to be separated. That is some truly acerbic stuff.

Or it’s a captain relaying information from the referee to a teammate who was risking being booked himself for remonstrating. Whatever your opinion on whether Maguire should have done his best Roy Keane impression and screamed in Anthony Taylor’s face until the red card was overturned and Man Utd were awarded a 3-0 victory by default, surely everyone can agree that is no ‘on-pitch spat’? It’s barely even a conversation.

The rest of the story is pretty weird, from a line suggesting Maguire was ‘appearing to side with the referee’ to a picture caption that reads:

He didn’t. He was told it wasn’t violent conduct by the referee and subsequently passed that news on to Rashford. He never put forward any sort of opinion himself, never mind ‘insisting’ anything.

A reminder that this is being presented as the single biggest piece of football news going currently.

It did not take long for the story to catch on elsewhere, mind:

Because it JUST wouldn’t BE a story without the MailOnline‘s RANDOM capitalisation somewhere, WOULD it?

And again, he didn’t side with the referee..

…the REFEREE, he simply listened to his judgement and quite sensibly decided that protesting against it when he already had a yellow card in his hand and the replays had been checked was pretty futile.

Still, all this is better than the Metro referring to the video as ‘hidden footage’, as though it was found on a lost camcorder in some random forest as opposed to being filmed on high-resolution equipment by professional cameramen.

This all could have distracted entirely from the biggest scoop of the international break. Thankfully the tabloids are in no mood to let that happen.

That certainly suggests this was a gathering called to ‘warn’ players after Ben Chilwell, Jadon Sancho and Tammy Abraham breached coronavirus guidelines. Yet John Cross tells us ‘the latest incident is not being seen as serious’ and the meeting actually revolved around ‘social media activity, being in the spotlight and observing strict rules in and around the camp while on England duty’.

Kane is definitely worthy of headline status: he is named once in the story – in the first paragraph as one of ‘England’s senior players’.

The Sun then do that typical thing of presenting their own words as if they are quotes with this:

Charlie Wyett only actually says players were reminded of ‘their responsibilities’ in a meeting that was planned before Chilwell, Sancho and Abraham’s violation of the guidelines. But no, Kane and Southgate – why does the player receive top billing there? – definitely ‘told England players: Don’t bring shame on your country.’

“It wasn’t a telling off, it was more reminding ourselves of what is acceptable and what’s not.”

Props to the Liverpool Echo for this…

…which is accompanied with a URL of: liverpool-sign-thiago-alcantara-messi

Oh my. And thanks to Gerardo Bruna for describing playing alongside Thiago Alcantara ‘before Liverpool move’. About 16 years before.

FourFourTwo have spotted a market and credit to them for trying to exploit it.

‘Why Manchester United’s transfer window was better than you think’

Apparently we should ‘forget the pounds spent for a moment’ and ‘forget that the business should’ve been completed weeks ago’. Both seem quite important when evaluating how well a club has done in the transfer window but still.

In fact, ‘whichever way that is spun, that is a transfer window straight out the book of the legendary Sir Alex Ferguson’. Good lord.

What about the new centre-half that was clearly needed? Well Teden Mengi is the ‘obvious answer’ there. Teden Mengi, the 18-year-old whose professional first-team career comprises of six substitute minutes in a 7-1 aggregate win over LASK Linz.

He hasn’t made a Premier League bench yet but will definitely sort out that defence. And it really ‘could prove to be a very successful window after all’ for Man Utd, as long as you ignore all the bad bits and accentuate the good ones.

Anecdote of the day

As Simon Jordan recalls in The Sun:

‘In 2005, we tried to sign Dean Ashton for Crystal Palace from Crewe – but my lamentable integrity led me to suggest to the chairman of two other bidding clubs that we should coordinate our bids.

‘My idea was that we didn’t strangle each other for the benefit of Crewe and just let the player choose where he really wanted to play.

‘That lasted five minutes as Norwich changed their mind – and whacked millions on.

‘Off the player went to Carrow Road, not that Delia Smith cooked up a tastier dish as they finished below us in the league.’

Yes. On goal difference. As you both suffered relegation to the Championship. Your ‘lamentable integrity’ hasn’t stopped you from obscuring the context somewhat.