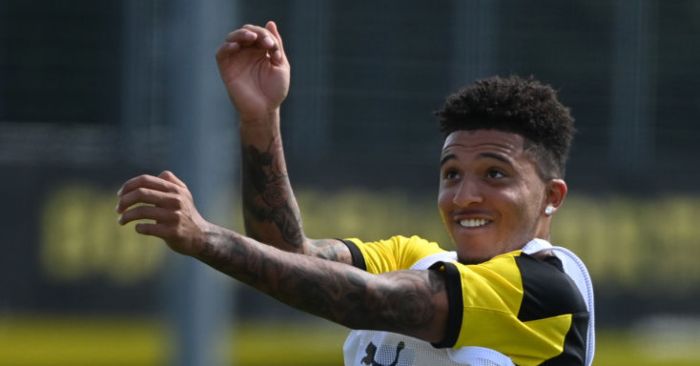 It was said that Man United ‘will not pay more than £50m’ for Jadon Sancho. They have ‘forced’ Dortmund into accepting £110m.

Bullied night
Neil Custis has the latest on Jadon Sancho in The Sun.

‘MANCHESTER UNITED are close to landing Jadon Sancho in a record £110million deal.’

Sounds about right. That’s what everyone else was going with on Monday evening. Do continue…

‘But United will not be bullied into meeting next Monday’s deadline set by Borussia Dortmund to sign the English superstar, 20.’

They won’t be ‘bullied’ into meeting a deadline…but might do anyway. That’s very ‘I’m doing this because I want to, not because I’ve been told to’.

They won’t be ‘bullied’ but they are actual children.

Christ, Neil. It’s a football transfer, not bloody war reparations. They haven’t ‘forced the Germans’ to do anything. They have come to a mutual agreement that benefits both clubs: United can report the deal at the initial fee and Dortmund will point to the overall potential figure. Everybody wins. So why are we pretending that one of the sides is losing out in any way here?

It has nothing to do with Sancho’s age. There was no way United were going to pay the initial demand of £110m in one go because that is barely ever how transfers actually work. The fee is paid in instalments all the time, especially when the numbers are so high.

Plus it was reported by Sky Sports in June that United ‘will not pay more than £50m’ for Sancho as an overall fee. And there was no way Dortmund were going to accept that. So have United been ‘forced’ to up their bid to more than twice that amount by a club refusing to be ‘bullied’? Or is this just a very natural byproduct of negotiating and public posturing?

Still, if it makes you happy to deploy such bizarre language about a club with the third-highest revenue in the entire world breaking the British transfer record but not being ‘bullied’ by a considerably poorer team, go for it. But the only thing that sounds ‘forced’ around here is your belief that the big, bad, old Manchester United is back.

The paper that cried Wilf
It might sound like Mediawatch is being a little churlish (surely not?!). But the trumpeting of Manchester United’s apparent Sancho success jars a bit when you consider how they reported Arsenal’s attempt to sign Wilfried Zaha last summer.

Tomorrow's back page: Penny-pinching Arsenal have made a derisory £40m bid for Wilfried Zaha – with Argos style payments over five years | @neilashton_ pic.twitter.com/npRXwwk6El

From ‘ZAHAHAHA’ and a ‘derisory 5-year payment plan’ that would absolutely not work at Argos to a side being ‘forced’ to accept the fee in instalments by a club refusing to be ‘bullied’ into paying it all at once. Brave Silly Arsenal.

How it’s done…
Perhaps Custis could learn a thing or two from the Daily Mirror‘s Alex Richards:

‘The Red Devils have insisted that no deal has yet been reached, and had initially hoped to do a deal closer to £80million.

‘However, latest proposals were seen as something of a breakthrough, with United coming in under that figure but ultimately also giving Dortmund what they want: an initial figure just north of £60million, with the remaining sum of £45million being paid out in 2021 and 2022.’

That’s all well and good but who got ‘forced’ into backing down?

What are they smoking over there at the Mirror?
Mind you, the Mirror undo any good work elsewhere with the following story:

Both of which together makes £40.6m. And is maths Mediawatch had to assume was the headline figure and is still not entirely sure because it is never properly explained. And it requires Woodward to persuade Sanchez to forego all bonuses owed to him by United over the next two years, while forcing Dortmund even further into lopping £25m off their Sancho demands.

Easy enough. Jake Polden really is the absolute master at this.

“Rangers are a huge club, but to be Bournemouth manager is a bigger job.”

“Bournemouth is the potential to get them back into the Premier League.”@JamieOHara1 says #AFCB would be a bigger job for Gerrard than #RangersFC. pic.twitter.com/62oDTWFtR6

Jamie O’Hara, there, telling talkSPORT that Bournemouth is “a bigger job” than Rangers. That “they’re a higher profile football team”. That he “would take the Bournemouth job” if he was in Steven Gerrard’s position.

That is the same Bournemouth who have just been relegated and are in the process of selling one of their better players, and the same Rangers who are still in the Europa League knockout stages and second favourites for three different domestic trophies.

But why keep trying to build towards a meaningful challenge of Celtic’s monopoly on the Scottish league when you could swap all that for a Championship club that posted incredibly worrying financial results even before they dropped out of the Premier League?

If the Billericay Town player-manager (with a league record of P21 W3 D9 L9 F29 A40) offers job advice, you listen.

That’s the headline from The Sun. How’s this for a revision?

‘Arsenal players recoup combined £12m in wages by qualifying for Europa League, thus reducing the pay cut agreed in April to just 7.5 per cent, as was agreed at the time’

It’s a little longer. It’s also infinitely more accurate and less needlessly incendiary. Get that ‘despite failure’ out of here.

Won't this only work if Ben Chilwell has followed absolutely nothing of Danny Drinkwater's career since summer 2017? pic.twitter.com/SwRjsMMkgO

Smut. And based on Phil Neville quotes, no less. Time for a shower.

Recommended reading of the day
Miguel Delaney on the Championship play-off final.