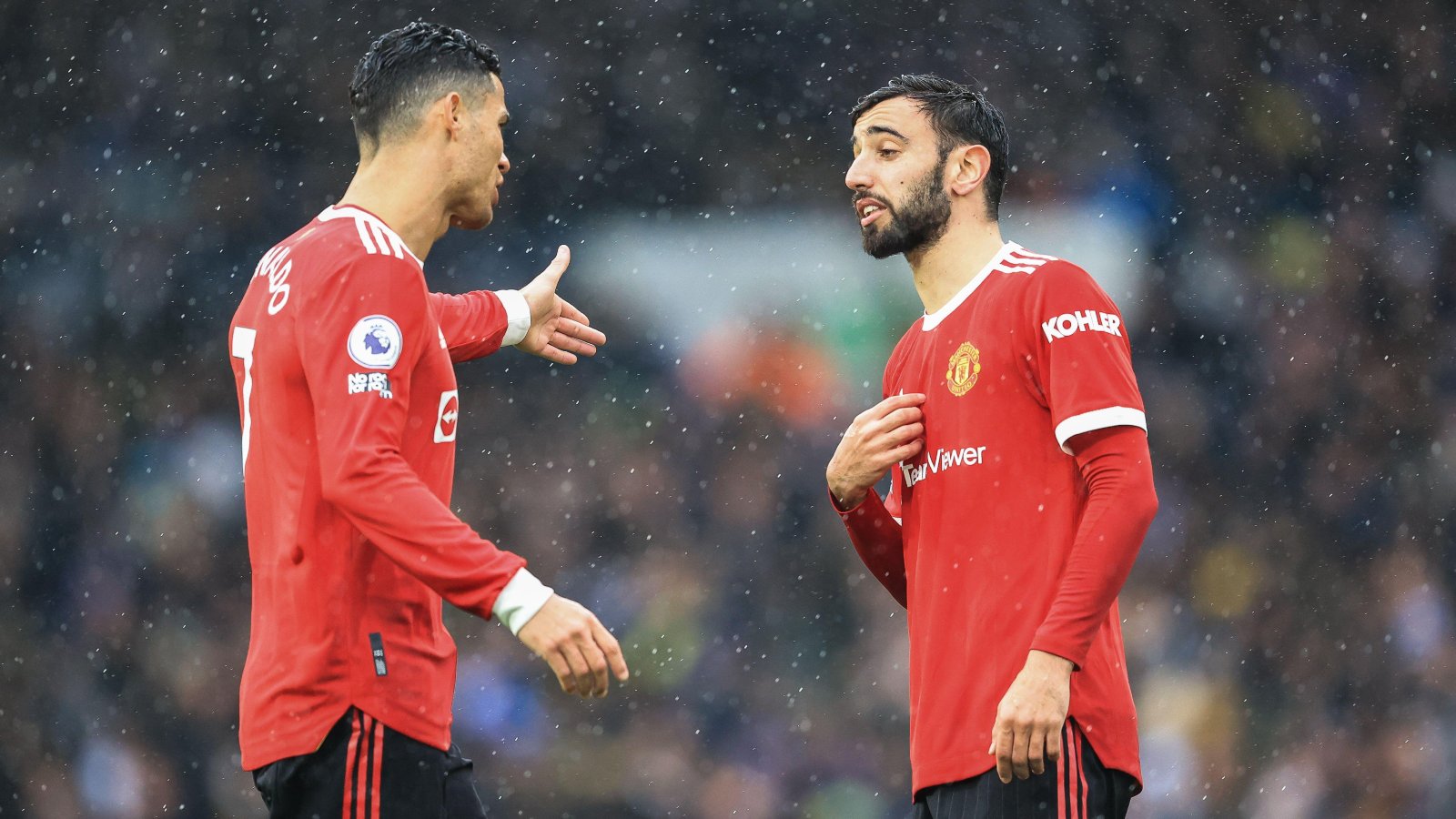 Bruno Fernandes led the Man Utd analysis apparently (he didn’t) and Cristiano Ronaldo ruined a marriage (he didn’t). Just another day in the media…

Bruno mars
“After the game I said straight away I think we conceded three goals on the counter against a team that normally plays in possession,” said Bruno Fernandes on Wednesday. Nice quotes; we covered them here.

So the key takeaways from that sentence are clearly this: He said that straight after the game. And Manchester United conceded three similar goals against Manchester City.

He then said: “We could have avoided that but we didn’t and they scored the goals. But as I said, we saw that, we knew what were the mistakes, and now more than see and understand what mistakes we did [the key now] is not to repeat it again and get back to the best results that we can and win games – which is what counts in football.”

Put that through the clickbait machine that is standard issue in all Reach offices and what do you get from the Mirror website?

We are beating a dull and lonely drum here, but that’s simply not true.

He did not ‘highlight three mistakes’ during a team meeting; the “after the game I said straight away” is the clue there.

Hell, he did not even ‘highlight three mistakes’; he highlighted three goals in which they made mistakes.

Are we being pedantic? Yes. Does this matter? Kind of yes, because the descent into publishing absolute bollocks is swift and seems irreversible.

‘Bruno Fernandes has revealed the part he played in a team meeting that dissected Manchester United’s abysmal defeat to Manchester City.’

Did he balls. He said: “We had a meeting as the manager said, we went to see the tough things, to see the mistakes that we did.”

‘The United squad held a team meeting in the wake of the embarrassment at City, with Fernandes leading the analysis of their mistakes.’

So Erik ten Hag and his coaching staff stood back and allowed a player to ‘lead the analysis’? Sorry but did they f***. And that’s absolutely not what Bruno Fernandes says.

Penny for the thoughts of David McDonnell, covering Manchester United for the Daily Mirror, who wrote in his article that ‘Ten Hag and his players held a brutal inquest into the derby debacle, watching the game back and analysing their mistakes in a meeting that lasted almost three hours’.

Oddly, he did not mention that Fernandes ‘led the analysis of their mistakes’. But he might have to explain why it says otherwise on his newspaper’s website the next time he is in a Manchester United press conference.

Ron the rise
But if we are looking for real, pure, unadulterated clickbait, look no further than this absolute classic of the genre from The Sun website:

It’s glorious. Obviously the answer is ‘no’ but that’s irrelevant; the key is the question and the marriage (‘perfect marriage’, you might say) between UK and US personalities. and the very obvious suggestion that Ronaldo and Giselle have done filthy things to each other that is only debunked after you have seen four adverts, by which time your click has made them a penny or two.

Somebody should not be allowed back in a car until they learn what a U-turn actually is.

Message in a bottle
Mediawatch misses a time when people just spoke to each other and were not forever sending ‘messages’, like this one on the Express website…

…which was literally just Nunez saying something to his teammate.

But undoubtedly the best thing about this Express website story is that Nunez did not even say seven words to Van Dijk; he said four. In Spanish. It only becomes a ‘seven-word message’ when it’s translated.

Mo messages
Other things that are not a ‘message’; sorry Express boys.

* Anodyne comments about needing to ‘follow’ a manager because he is a ‘winner’. Not messages. (Son Heung-min sends Antonio Conte message to Tottenham board as stars left ‘frustrated’)

* Saying you “don’t know” if your loan spell might be cut short. Not a message. (‘Chelsea star Callum Hudson-Odoi sends subtle message to Graham Potter over January recall’).

* Goals. We can’t stress this enough. Not messages (‘Leeds could unleash 18-year-old ‘warrior’ after sending message to Jesse Marsch’).

A ‘message’ is ‘a verbal, written, or recorded communication sent to or left for a recipient who cannot be contacted directly’. Does that sound like a goal?

Bit of brilliance on LinkedIn for @FootballCliches as a bit of football banter makes a marketing testimonial. pic.twitter.com/fbz8sM6SHE