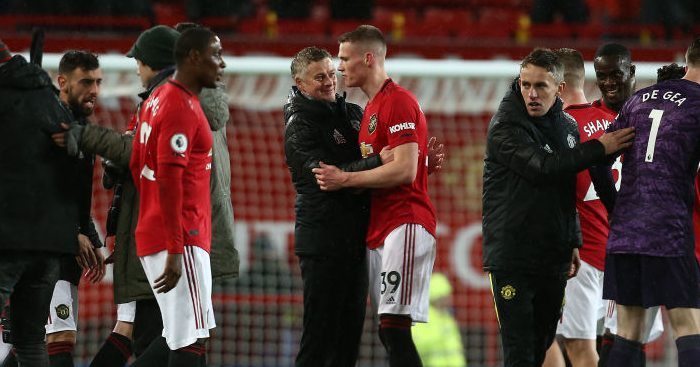 And there you were thinking he’d wallow.

Tell tale
‘JUBILANT Ole Gunnar Solskjaer celebrated derby glory and then told Manchester City and Liverpool: We’re on the way back’ – Neil Custis, The Sun, below a sub-headline of ‘Boss dreaming of titles again’.

Calling out the team you have just beaten is fair enough. But ‘telling’ the one 37 points ahead anything other than ‘you’re quite good’ seems brave.

But what are these ‘titles’ Man Utd are now ‘dreaming’ of? As Solskjaer himself admits: “We know we lack one, two, three players and some experience to be considered a title contender.”

Boat race
But what was Custis’s big takeaway (now then) from Man Utd winning at Old Trafford?

‘They really don’t need Paul Pogba back rocking this boat.’

Well however else will you fill column inches?

The game’s Gun
Henry Winter spends over 1,000 words and 13 paragraphs lauding Manchester United in The Times, with ‘the brains’ and ‘the swagger’ of ‘the catalyst’ Bruno Fernandes praised in particular.

He makes a single mention of Ilkay Gundogan – ‘First, [Mike Dean] annoyed City by awarding United a free kick when Ilkay Gündogan challenged Fernandes’ – such was the German’s ineffectiveness.

On the opposite page to Winter’s report, Ian Whittell’s player ratings give ‘major driving force’ Fernandes an 8/10. Gundogan? Why, he gets the exact same mark. He definitely looked like the joint-second best player on the pitch.

Fine Art
Arsenal beat West Ham on Saturday. They were unconvincing and fortunate. But it was precisely the sort of game they would have lost not long ago.

That much is overlooked by former midfielder Stewart Robson, who uses his platform of an interview with The Sun to suggest that Mikel Arteta really isn’t all that.

“I genuinely think Mikel Arteta is getting an easy ride from Arsenal fans and the media.”

He is. Because he’s doing quite well. That’s how this kind of thing works.

“The supporters didn’t like Unai Emery and when Arteta came along he was almost seen as the saviour.

“But do I think Arsenal are now a better side than they were under Emery? Sorry, I don’t think so.”

Even in just the most basic terms, they clearly are. Arsenal had 22 points from 17 games under Emery to start the season, and have 18 from 11 under Arteta. They are scoring at a roughly similar rate and have improved considerably in defence. It’s not even close.

It is far from the finished article – Arteta is not even three months into a three-and-a-half year contract – but it is irrefutably better than what came before.

“They have been outplayed in many matches and seem to have no game plan at all.”

“Someone said to me on Saturday that if Arsenal didn’t make the top four a lot of their top players would want to move. My answer was: Which top players? Apart from Pierre-Emerick Aubameyang, I cannot see teams like Liverpool or Manchester City wanting any of the current Gunners’ squad.”

Let’s pretend that’s true (Gabriel Martinelli might want a word). In that case, Arsenal have a woeful squad yet you claim Arteta “is getting an easy ride” for drawing positive results from them. And that is silly.

Robson goes on to discuss West Ham, for he also played for them and thus is an expert pundit on a meeting between two clubs he played for over 30 years ago.

“Their workrate has been better in their last three games and boss David Moyes will hope this continues for the run-in.”

Basham statement
Mediawatch presents to you, in its entirety, Garth Crooks’ explanation for choosing Chris Basham in his BBC Sport team of the week:

‘What was he doing there? Chris Basham in open play receives the ball in the box with his back to goal, flicks it over Kenny McLean’s head and takes a touch before he put his effort over the bar. His reaction indicated he felt he should have put Sheffield United 2-0 up. Now, Basham is a central defender and does not have a reputation for scoring goals so I want to know what he thinks he’s playing at? Basham has been outstanding this season for the Blades. I’m still not mad about their style of play but they have unbelievable spirit.’

a) Picking a defender seemingly on the basis that he almost scored an audacious goal.

b) Simultaneously wondering ‘what he thinks he’s playing at’.

c) Declaring that he’s ‘still not mad’ about the ‘style of play’ employed by a team seventh in the Premier League and praised by Jurgen Klopp, Pep Guardiola and various others for their tactical innovation.

Question, how’d you like this knowledge that I brought?
Is John Cross forgetting a certain recent visit to Anfield when he suggests a 4-0 defeat at Chelsea ‘was also the lowest point’ of Carlo Ancelotti’s Everton reign so far?

Recommended reading of the day
Jonathan Wilson on the Manchester derby.