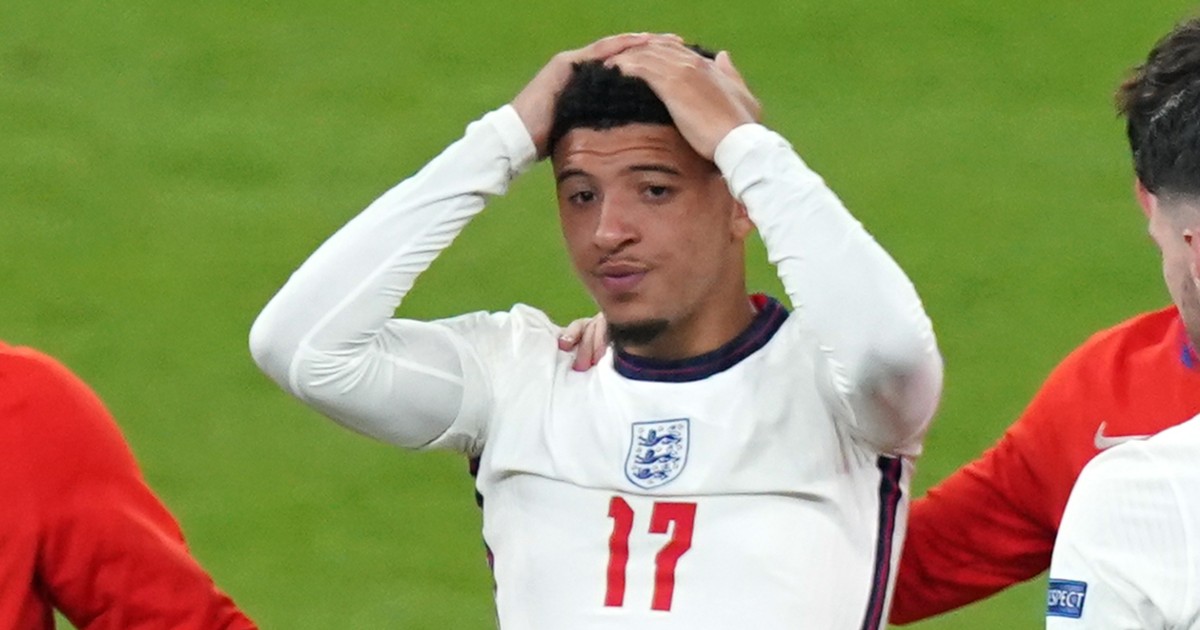 Manchester United hammered Championship relegation candidates Derby 2-1 in their first game of pre-season – and all that without Jadon Sancho.

Just wing it
It is important not to get carried away in pre-season: with transfers, with expectations, with results. The first few summer games in preparation for the upcoming campaign are particularly futile in terms of drawing definitive conclusions. They are first and foremost about building fitness after weeks or even a couple of months away. There is a tendency to overreact both positively and negatively to try and fill the void but everyone should resist the temptati…oh what on earth has the Manchester Evening News just published there?

Amazing. The headline alone exposes how preposterous the idea is. Manchester United ‘will not need a right winger for years’ because they won 2-1 against a Derby side currently dealing with a transfer embargo. And that is ‘even without Jadon Sancho,’ who must be thrilled with these developments.

The article in question is written by Mediawatch favourite Samuel Luckhurst, but unless he handpicked that headline himself it should be pointed out that he has been thoroughly done over there.

The sub-headline describes this as ‘a game that confirmed once and for all the right wing problems are over,’ seemingly based entirely on the fact Mason Greenwood played OK and Facundo Pellistri scored a goal. In a pre-season friendly. Against a team that can only sign free agents or loanees and was almost relegated to League One a couple of months ago.

But Luckhurst mentions Pellistri by name a grand total of once in a 745-word article that includes such lines as ‘there is little for the analysts to gather other than fitness data,’ and ‘in keeping with the inconsequential occasion’.

Consequential enough for Manchester United to have sorted their entire right side of attack out ‘for years’ on the basis of a one-goal pre-season friendly win over Championship relegation battlers, even before taking into account their impending £73m signing of Sancho.

Out of Toon
Imagine what the headlines might have looked like had they lost that glorified fitness session. Of course, there is always at least one Premier League club willing to give us a decent idea of the exaggeration. Newcastle, maybe, who started their pre-season with an ’embarrassing defeat against NON-LEAGUE York City’

Thank you to the MailOnline for the absolutely necessary capitalisation. Newcastle, who finished 12th in the Premier League last campaign despite being thrashed 5-1 by Middlesbrough during pre-season at one point, should be suitably embarrassed.

Echo chamber
One of the bigger stories on Monday morning, however, is the vaguely surprising news on Jordan Henderson’s future prospects at Anfield. As much as it seemed to come out of nowhere, it did not catch the Liverpool Echo off guard; they can always sense an opportunity:

Sometimes you just have to stand and applaud. That is how you get clicks on 16-year-old Ethan Ennis turning down a scholarship.

Hello Dean, you’re a stupid head
The Liverpool Echo have been particularly – and thankfully – busy on a day in which the newspapers understandably forget football exists because Lewis Hamilton did some driving and golf happened.

Here is one of their headlines:

The lesson in question is obviously not to replace Peter Beardsley with Dean Saunders three decades ago. Take heed, Jurgen.

Que Salah, Salah
Elsewhere on the website is this doozy:

A naturally competitive professional athlete was frustrated at the concession of a goal during a training match and that ‘brief angry reaction’ should be taken incredibly seriously by Liverpool’s rivals as it may be ‘a warning to what Salah could produce in the upcoming campaign’.

You would think they’d know that a player with 95 goals in 145 Premier League games for Liverpool is quite good without having to see him pull at his bib in temporary frustration because his teammates could not stop Joel Matip from scoring a fine solo goal.

Mo problems
On the subject of Salah and, well, the Liverpool Echo…

How kind of Paul Merson. You would think he’d tell Harry Kane, considering he currently holds the Golden Boot. But this is a Liverpool-centric website so that’s fair enough.

Kane is mentioned once in the entire article, which quotes Merson as saying “Mohamed Salah will once again be in the reckoning as he always is,” while tipping Dominic Calvert-Lewin “to be in the running… as well”.

The claim comes from an interview Sportskeeda conducted with Merson, in which one of his predictions is that Kane “will win the Premier League Golden Boot – only if he stays at Tottenham Hotspur though!”. He speaks quite extensively about the topic.

Leaving aside how strange it is to suggest he’ll score more goals at Tottenham than he would with Manchester City, those key quotes about Kane are left off the Echo’s rehashed article completely. It is a weird length to go to to pretend it is Salah’s Golden Boot to defend.

Get them to the Greek
Even the newspaper websites have essentially given up on football reporting for the time being, save for the honoured tradition of scrambling for pictures of players on vacation.

The Sun website clearly has their best investigative journalists on the case:

‘Several England players were spotted in Mykonos a few days ago and it’s believed they’re on the Greek island enjoying the rest of their holiday.’

That is some real fine sleuth work. More as we get it.

Flight of fancy
Staying and finishing on The Sun website, it is fun to view their new-found respect for Raheem Sterling through the particular prism of his aircraft choices.

‘High-flying Manchester City ace Raheem Sterling who rakes in a staggering £200,000 a week was spotted penny pinching – after flying back from Spain with EASYJET’ – October 2016.

Budget airline when not playing well for England: bad.

‘JET-SETTING Raheem Sterling packed in two holidays in a week before heading back home to join the England team’ – May 2018.

Not a budget airline, not playing well for England but going on two holidays: hmm.

Not a budget airline, playing well for England: crack on, fella, it’s your money! Until you use it on f**king EASYJET again.