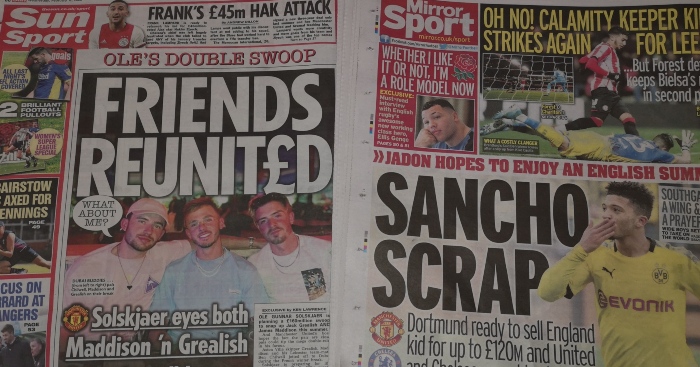 Just good friends
We have hit that juncture of the winter break when tabloid sports editors have to either get strangely obsessed with getting Jimmy Greaves knighted (Daily Mail) or are just screaming ‘f*** it’ as they throw a big pile of transfer sh*t at the wall and hope some of it sticks.

The Daily Mirror, Daily Star and Daily Express are all now owned by the same people so all adorn their back pages with talk about Manchester United, Chelsea, Jadon Sancho and £120m that has been circulating for so long that we are not sure what qualifies it for top billing on one newspaper, never mind three.

The Sun? They are in no mood to waste a picture of James Maddison and Jack Grealish holidaying in Dubai and thus ‘exclusively’ claim that ‘OLE GUNNAR SOLSKJAER is planning a £160million swoop to snap up Jack Grealish AND James Maddison this summer’, which is preposterous on so many levels. Even ignoring the fact that they are very similar footballers, uniting two young men with a history of inappropriate social decisions would be utter madness.

But The Sun – for some obscure reason incredibly positive about United of late – somehow see their friendship as a boost to the club’s chances of pulling off a ‘mega double-deal’ (yes, a ‘mega double-deal’), as Solskjaer seemingly ‘hopes the fact the pair are close pals could tip things in his favour’.

Yes, because rival football clubs are notoriously keen to sell their biggest assets just so they can work with their friends.

What’s £10m between friends?
‘And Grealish, close to a first England call-up, is understood to favour a move to Old Trafford above any other club. Villa would want up to £60million for their talisman’ – Dan King, The Sun exclusive, February 9.

‘Star midfielder Grealish has been at Aston Villa for 18 years since joining at the age of six. But the £70m-rated star is beginning to accept  he will have to quit his beloved club to boost his  England hopes and also play at the top end of the Premier League and in Europe’ – Ken Lawrence, The Sun exclusive, February 12.

If his valuation has gone up at least £10m in just three days, how much will he cost come the summer? Will the ‘close pals’ ever be reunited?

Meet me in the muddle
‘Solskjaer has muddled through a difficult first full campaign in charge at Old Trafford with poor form and injuries to key players wreaking havoc with his plans’ – Duncan Wright, The Sun.

Just when you think a manager’s luck cannot get any worse, his players produce ‘poor form’. What’s a man to do?

‘But the Norwegian, 46, believes things are coming together at just the right time to herald a barnstorming finish to the season.’

Yes, that one victory in five Premier League games does certainly suggest that ‘things are coming together’.

Devil’s in the detail
‘He (Solskjaer) wants to continue the reconstruction of his squad’s attacking options, having already landed £46.6m Bruno Fernandes from Sporting Lisbon’ – Ken Lawrence, The Sun.

Red missed
That Jadon Sancho piece – written by John Cross – that adorns the back page of the Daily Mirror, Daily Express and Daily Star was clearly missing one thing, helpfully added by Luke Gardener, who re-wrote/fixed the story for the Express website:

It’s a veritable treasure trove but highlights include:

* ‘Man Utd’s dream lineup ahead of next season’ including Fred. With money no object and astonishing amounts of cash spent on Erling Haaland, Kalidou Koulibaly, James Maddison and Sancho, United will absolutely stick with (the admittedly improved but still Fred) Fred.

* ‘Man Utd’s British influenced lineup’ including Jack Grealish in defensive midfield. Apparently ‘that team could evolve into one that could dominate for years to come’. Dominate what exactly? The Championship?

Tenuous match
Of course, Sancho = hits right now, so everybody is keen to grab a piece of the action. And that includes the, erm, Sheffield Star:

You can’t see us but we’re standing up here…

No woman, no cry

Can’t help thinking there is something missing from the front page of The Sun’s four-page Women’s Super League special pull-out. pic.twitter.com/0ye9lQLSte

On the beach
From The Times: ‘They don’t just lie on the beach, they follow the lead of Aston Villa duo Tyrone Mings and Jack Grealish, standing on the silvery sand as the setting sun illuminates your toned body and reflect on the happy bonding experience with no relegation worries.’

Propaganda of the week

25′ Goal Brentford. Benrahma opens the scoring for the hosts with a left footed shot. 1-0

Tom Crocker gets a genuine exclusive from Dan Gosling