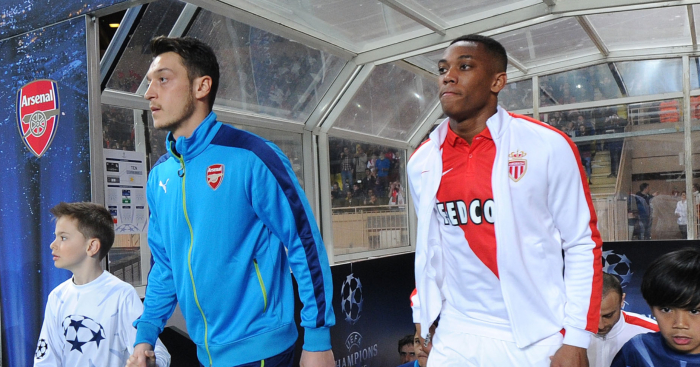 Joke’s on you
What is the biggest story in all of football as of Thursday lunchtime, following an evening in which Manchester City won a Champions League away game with two late goals, Diego Simeone celebrated by grabbing his testicles, and Cristiano Ronaldo was Cristiano Ronaldo?

I know that she’s no pedant
‘When Fernandinho gave away another for manhandling Salif Sane at a free-kick it looked like Pep Guardiola was staring down the barrel of a first Champions League defeat on German soil’ – Daily Mirror.

(No wonder Mediawatch has no friends.)

Martial awe
‘Anthony Martial’s great form could cost Manchester United £17.4million,’ according to a Mike McGrath exclusive from The Sun.

‘The forward, 23, is poised to make a comeback for France after boss Didier Deschamps admitted Martial is “back at a very, very good level”.

‘He needs to play 45 minutes in the game for an appearance to count and is on 11.’

So his ‘great form could cost’ United £8.7m if he literally more than doubles his total of 45-minute-plus international appearances. Gotcha.

‘Deschamps is now considering a recall for next month’s European Championship qualifiers against Moldova and Iceland.

‘And Martial could hit the 25-cap mark before the end of the campaign.’

Could he? France have four games scheduled between now and the end of July; where are they magicking the other ten fixtures (all of which Martial has to feature heavily in) from?

But that is besides the point: what of the rest of this £17.4m ‘cost’ to United?

‘He will also trigger another £8.7m payment if he is named as a nominee for the Ballon d’Or award.’

So he just has to be one of the best players in the world. Righto.

‘Under the terms of the original deal, Monaco were due two further payments of £8.73 million each if Martial played 25 games for France and was nominated for the Ballon d’Or before the end of the current 2018/19 season. Yet with Martial not among the Ballon d’Or nominees announced this week and out of favour for France, for whom he has played 18 times, seven games short of the stipulated target, neither clause will be met.’

Unless Martial’s form is great enough to force a revised Ballon d’Or vote, and unless France arrange a convoluted mid-season friendly tournament, something tells us it won’t ‘cost Manchester United £17.4m’.

Emery old dance
At his press conference on Wednesday, Unai Emery spoke of the need for Mesut Ozil to “train consistently”, to “be available for us for training” and to be “without the injuries, without the sickness”. The German has missed 16 matchday squads of a possible 38 this season; it was hardly an unfair assessment.

But the message has been lost in translation by the time it reaches Thursday’s newspapers. The Sun describe it as a ‘challenge’ to ‘sicknote’ Ozil, using their own inverted commas to signify that they are actually quoting someone.

Big fan of The Sun using inverted commas to quote something that wasn't said. pic.twitter.com/qolOQHaGAS

So did a 47-year-old Spaniard actually use the term ‘sicknote’ to refer to one of his players during a press conference? Has he ever heard of the term ‘sicknote’ before? Probably not. But it’s obviously fine to imply that he was having a go at ‘sickly’ Ozil, who ‘looked ready for snow at a sunny London Colney’.

This just in: it can still be cold even when the sun is out. More as we get it.

‘Unai Emery has told Mesut Ozil to rip up his sicknote if he wants a part in Arsenal’s future,’ writes Mark Irwin.

Either that or he asked a footballer to completely prove his fitness and good health in training before he picks him to play in games, which seems like good management.

The Daily Mirror use similar terminology, with Paul Brown claiming that the Arsenal manager ‘has challenged Mesut Ozil to tear up the sicknotes and start earning his money at Arsenal’.

Again, that really isn’t what he said.

And this is not a boat the Daily Mail are about to miss. Their headline – to a completely fair piece in which Sami Mokbel refers not to ‘challenges’ or ‘sicknotes’ but uses the actual quotes instead – is ‘Emery tells Arsenal misfit Mesut to man up’.

They must have missed the ‘challenge’ that he absolutely didn’t set.

Is it too late now to say Sarri?
‘Just 48 hours after being ridiculed by Chelsea’s fans, Maurizio Sarri was asked whether this was his most torrid spell as a manager’ – The Sun.

Probably not, considering he has managed in the second, third, fourth, fifth, sixth, seventh and ninth tiers in Italy. He might have suffered one or two worse runs of form than five defeats in 14 games.

One day like this
‘They will be without suspended striker Alexandre Lacazette, who was sent off late on in the Borisov Arena for an elbow’ – Daily Mirror.

Seems harsh. We all have them.

Sky is the limit
Sky Sports are not about to pretend that the Europa League is worth reporting on. They are busy previewing Sunday’s game between Manchester United and Liverpool, that they thankfully haven’t given a two-word moniker yet.

Anyway, Phil Thompson is here with some tactical insight ahead of this rather important fixture.

“I think in this game it will be which side defends better.”

And now over to Matt Le Tissier.

“I think the outcome of the game will be decided by the attacking players.”

Aguero subbed, martin keown “ you dont see that very often” aguero has been subbed 17 of 21 appearances this season 😂😂

Recommended reading of the day
Marcus Alves on Joao Felix.