Home All The News Mediawatch: Man City are good? Everyone else is rubbish 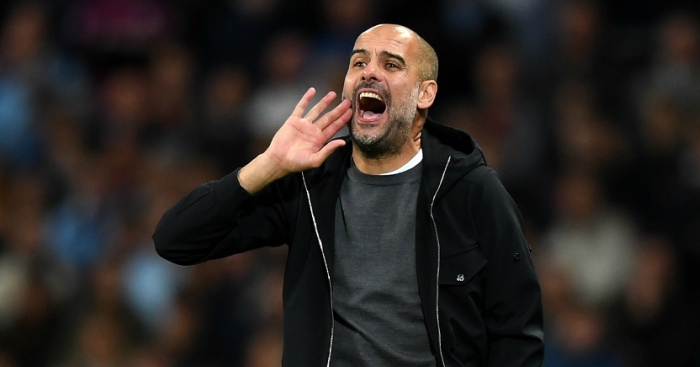 Pep talk
December 13, 2016 is a date that will go down in history for Pep Guardiola. The Spaniard’s world has never been the same since he offered a simple and honest response to a straightforward question in a press conference.

Asked by a Spanish journalist for his thoughts on criticism he had faced from a pundit the week prior, Guardiola provided a confused response.

Thus started one of the stranger, more one-sided rivalries in modern football.

‘City are undoubtedly the best… in the worst Premier League I’ve seen for years,’ reads the Daily Mirror headline to his latest attempt to denounce the achievements a team who have made the best start to an English top-flight season ever. It’s a ballsy stance.

You see, City might enjoy an eight-point gap over their nearest challengers, but that is only because everyone else is just a bit rubbish. It has little to do with City being almost faultless thus far.

Collymore ‘has to doff my cap’ to City for their ‘remarkable start’, but their ‘wonderful achievement’ needs to be put into context. And that context is that ‘City are playing in the worst-quality top flight’ in recent history.

Arsenal? Not ‘competing’. Chelsea? ‘Having their struggles’. Liverpool? ‘Not competing’. Tottenham? Drawn with Burnley, Swansea and West Brom, and ‘poor’ against Arsenal. Manchester United? ‘The only team’ capable of going ‘toe-to-toe’ with Guardiola’s side.

Which is weird, because United are closer in terms of points to all of those sides (and Burnley) as they are to City.

Also, if these elite clubs really are so comparatively poor, how are Chelsea, Liverpool, Manchester United and Tottenham topping their Champions League groups? The Bundesliga and La Liga must be really bad, and the German and Spanish equivalents to our Stanley must be really annoyed.

Oh, and if this really is ‘the worst-quality top flight’ in recent memory, Mediawatch would like to point out one of those pesky facts: Manchester United’s current tally of 29 points after 13 games would put them top in two of the last seven seasons. Would Collymore really rank this campaign as lower on quality as the one when Leicester won the league with 81 points?

But back to City, for Collymore cannot go more than five paragraphs without discussing a manager who he thinks once made the mistake of not knowing who he was.

‘So while, yes, their achievement is a fine one by a very good manager, and while you can only beat what is put in front of you, I’m finding it difficult to get too excited about what they are doing.’

Stan Collymore is not ‘too excited’ about a team dropping two points in 13 games, and winning 23 of their last 25 games. Pass it on.

‘This, after all, is a club which has spent billions in a short space of time,’ Collymore predictably continues, rifling through his book of ‘Reasons to hate Manchester City’, and sympathising with Manchester United and Chelsea, who just have no money.

‘Where City will be judged is in the Champions League when they take on Barcelona in the Nou Camp, Bayern Munich in the Allianz Arena and Real Madrid in the Bernabeu.

‘The question for them is not whether they can go to Selhurst Park or the Vitality Stadium to get a result, but whether they can they go [sic] to those Spanish and German fortresses and turn it on in the same way they have been doing on the domestic front.

‘If the answer is yes then we will all be mightily impressed and City will get all the plaudits they deserve.’

So you will only be impressed by Manchester City’s dominance of the Premier League if they…beat Barcelona in the Champions League? Erm…

Stanley knife
Let’s be fair to Stan. Perhaps he is just upset that, back in August, he wrote that this season ‘is shaping up to be the most competitive rollercoaster ride in the ­history of the Premier League’.

Oh, and he tipped Chelsea for the title, as City will ‘take time to settle’, and will ‘demolish some teams but concede too many’.

Moving the goalposts
‘What will determine Pep Guardiola’s success is not how they play, it’s whether or not they can get one more point than the team in second’ – October 18.

41 days later, and City have extended their lead over ‘the team in second’ from two points to eight. And now…

‘Where City will be judged is in the Champions League when they take on Barcelona in the Nou Camp, Bayern Munich in the Allianz Arena and Real Madrid in the Bernabeu. The question for them is not whether they can go to Selhurst Park or the Vitality Stadium to get a result, but whether they can go to those Spanish and German fortresses and turn it on in the same way they have been doing on the domestic front’ – November 28.

Obsession, by Calvin Klein
‘Manchester City’s Pep Guardiola is a good manager but stop kidding yourself, he’s not a genius like Cloughie’ – October 20, 2016.

‘Pep Guardiola’s ‘My way or the highway’ attitude could see him toppled by both Conte and Klopp’ – December 5, 2016.

‘It’s fine if Pep Guardiola doesn’t know me – Brian Clough did, rated me highly, and he got his success from scratch’ – December 13, 2016.

‘Only in this era of hype and hysteria can Manchester City’s Pep Guardiola be called the greatest manager’ – January 17, 2017.

‘Sergio Aguero can never do enough for Pep Guardiola – the Manchester City boss struggles to manage his big names’ – March 5.

‘Why Pep Guardiola’s trophyless first season at Manchester City is worth only three or four out of 10’ – April 24.

‘Tottenham are probably the only team in England, everything considered, that I would pay money to watch. Not Manchester City – good to watch, but I just can’t get excited about them as a club’ – November 21.

Gift-wrapped
Mediawatch does not wish to accuse Martin Samuel of being the archetypal angry old man shouting at clouds, but, well…

Three weeks on from stating that Eric Dier was the problem with modern football because he couldn’t remember who won the most recent World Cup, Samuel is back to rue ‘the players of today’.

‘Arsenal film snub shows how little a club’s past means to today’s players,’ reads the headline to his Daily Mail piece (about something that happened almost three weeks ago), which begins thus:

‘They are a proud lot, George Graham’s boys, but even so, the turnout for the premiere of 89, the film about their magnificent last-minute title win at Anfield, must have hurt a little.

‘Only one member of the current squad, Jack Wilshere, bothered to make it.’

From the MailOnline, November 8: ‘Jack Wilshere and wife Andriani Michael join Arsenal stars past and present at world premiere of 1989 title-winning season documentary’

One of Jose Mourinho's key allies has tragically passed away #mufc https://t.co/6wfu5xvmyK

Not too tragic to clickbait it, mind.

Recommended reading of the day
Suzanne Wrack on how to get more women into football.

Andrew Headspeath on an Englishman in La Liga.