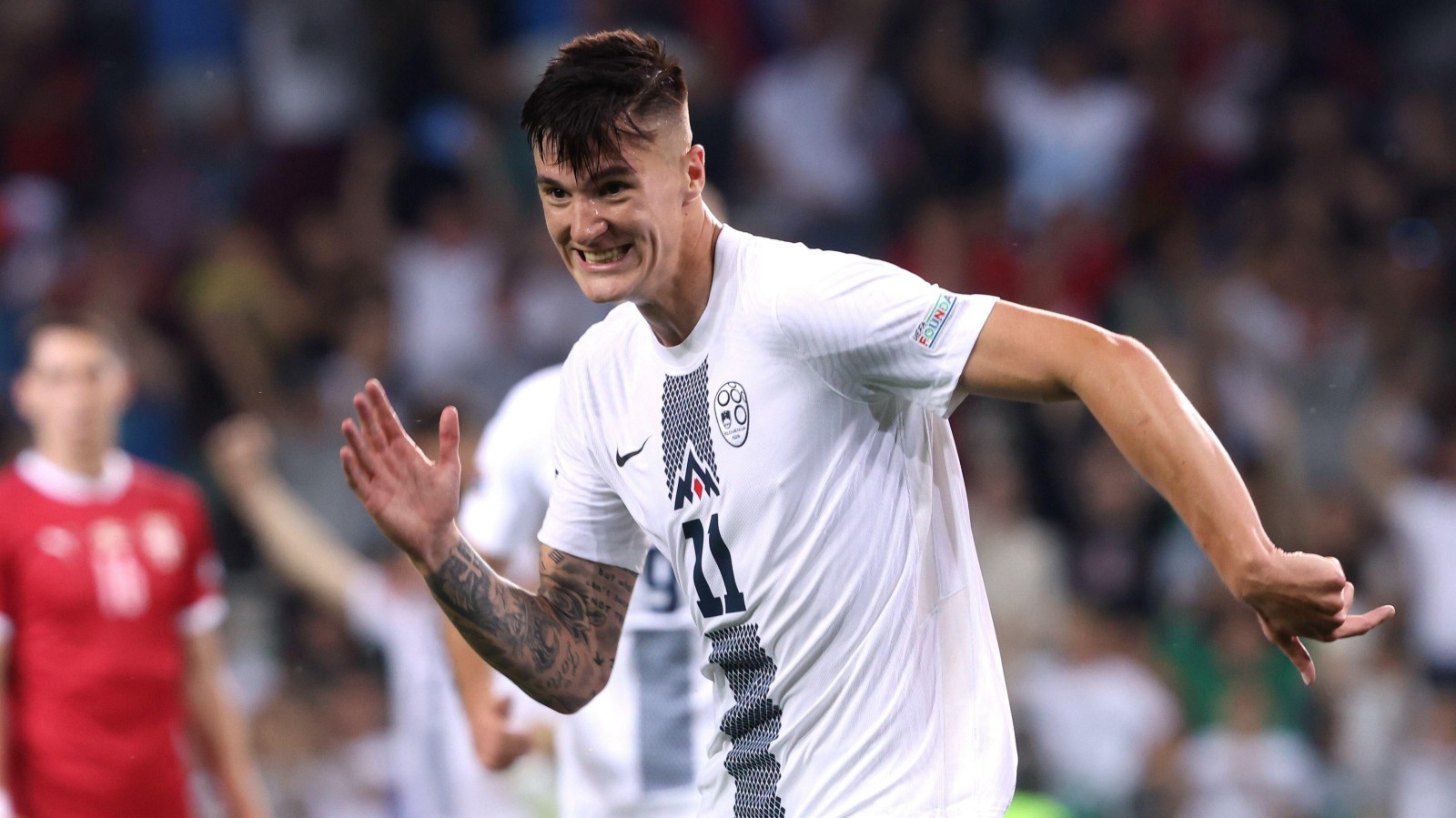 Everton are so ‘desperate’ for strikers that they have bid £33m for a midfielder. Benjamin Sesko gets the Manchester United shirt treatment.

Crock of old shirt
This truly has been the summer transfer window of dream Manchester United shirt numbers and it seems as though Benjamin Sesko might fit right in at Old Trafford.

Which is one way of saying he took the No. 30 shirt when he moved up to the Salzburg first team in 2020, having worn 21 on loan at FC Liefering, 29 for Salzburg’s youth teams and 25 and 11 for the Slovenian national team.

But 30 is definitely the guy’s ‘dream Manchester United shirt number’. Absolutely. And he can have it ‘on one condition’.

‘At the moment, the No.30 shirt is occupied at United by goalkeeper Nathan Bishop. However, his future at Old Trafford is in doubt, with League One side Wycombe Wanderers keen on securing his signature. He spent last season on loan at Mansfield Town and excelled between the sticks.

‘Therefore, if Bishop, who turns 23 later this year, does move on, it would open the door for Sesko to retain his preferred shirt number at Old Trafford.’

So he can have ‘his preferred shirt number’ on the ‘condition’ that the current incumbent vacates it? Which is surely true of any potential signing?

Mediawatch just hopes that Nathan Bishop gets his dream Wycombe Wanderers shirt number if he joins. He can have it on ‘one condition’: as long as current No. 30 Josh Blunkell gives it up.

Dressing down
If Sesko waits it out he could earn the opportunity to reject the No. 7 shirt. Cristiano Ronaldo is definitely absolutely surely on his way – at least if his Manchester United teammates have anything to do with it.

‘Man Utd dressing room want rid of Cristiano Ronaldo insists Jamie Carragher,’ reads the Daily Mirror headline. And if there is one man who will have the inside track at Old Trafford, it’s the Liverpool legend.

Here is his ‘insistence’ in full:

“No other club in Europe at this moment wants him, I might be wrong. But it doesn’t look like United can get him out, so at the moment other clubs don’t want him. And I think if you asked Ten Hag, I don’t think he wants him. And I’m not quite sure the dressing room at Manchester United would want Cristiano Ronaldo right now.”

There’s an awful lot of “I think” and “I’m not quite sure” for a man so supposedly certain.

What’s my name?
Everton have made three signings so far this summer. Ruben Vinagre is in on loan from Sporting Lisbon to provide competition at left-back. James Tarkowski has joined as a free agent to reinforce the defence. Dwight McNeil moved for £20m from Burnley.

Between them, those three scored a single league goal last season.

And with Dominic Calvert-Lewin sidelined through injury for the opening month of the upcoming campaign, Everton’s only remaining senior centre-forward is Salomon Rondon. So Chris Bascombe of the Daily Telegraph is absolutely correct when he says Frank Lampard ‘desperately seeks firepower before the Premier League kick-off’.

‘Lampard is in desperate need of a striker as he prepares to take on Chelsea on the opening day given Dominic Calvert-Lewin’s injury turmoil has continued with a knee injury which could rule him out for six weeks,’ he continues.

And the man apparently identified to help is ‘Lille striker Amadou Onana,’ whose reported £33m signing ‘would go some way to helping’ and improving Everton’s ‘severely depleted’ attack.

There is a slight problem, of course. Onana is a defensive midfielder. That information is freely available but could also have been inferred from the fact he scored three goals in 41 appearances for Lille last season. Rondon got three in 23. Not sure even Everton are that ‘desperate’.

Problem solved. One final bit of research next time would mean you don’t have to keep the ‘desperate-need-striker-prompts-evertons-33m-bid-amadou-onana’ bit of the URL, mind.

Jesus sliced
Elsewhere on the Daily Telegraph website, they answer the question that philosophers have been wrestling with for decades:

‘Why Gabriel Jesus is a better striker than Alexandre Lacazette’

It’s a real head scratcher but does it have something to do with Gabriel Jesus having as many Premier League winner’s medals as Alexandre Lacazette scored Premier League goals last season?

Changing of the gaard

A quick message from the same outlet that said ‘our Lionesses have restored pride in being female’…
‘Meet the Premier League Wags of 2022-23, from an ex-New England Patriots cheerleader to a stunning Argentinian showgirl’

Maths of the day

On loan Liverpool man Tyler Morton on why he chose to move to Blackburn for the upcoming season. pic.twitter.com/4qFCKYiVEI