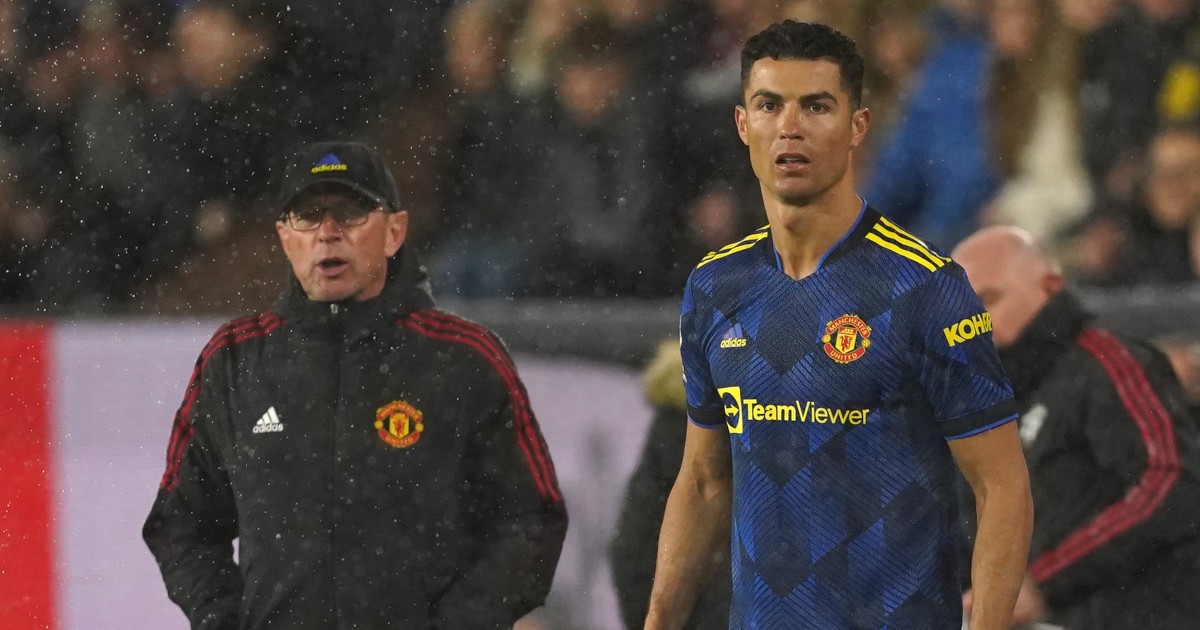 Ralf Rangnick is no improvement on Ole Gunnar Solskjaer in the Old Trafford dugout. Manchester United had a better pass accuracy before.

Fan service
It was a pleasant surprise to see most journalists condemn David Moyes and West Ham for starting Kurt Zouma against Watford. But ‘most’ does not seem to include the Daily Mail‘s Matt Barlow:

‘Moyes defended his decision to stick with Zouma, claiming his job was to pick the best team to win the game, which it is and fresh in his mind surely the performance of Issa Diop at Kidderminster on Saturday.’

Oh well that’s alright then. Never mind the cursory ‘which it is’ to sidestep the b*llocks excuse from Moyes that he “will look after the football side”, essentially absolving him of blame because Issa Diop isn’t quite as good is pathetic.

Barlow goes on to point out that Watford fans booed Zouma throughout the game, while ‘chorusing a variety of insults’. But he adds that ‘most of the home crowd were broadly supportive’, which will presumably come as a surprise to this lot:

Jordan Davies, The Sun: ‘The very mention of his name over the tannoy during the warm-up was met with jeers and whistles only to be verbally thumped some more by both sets of fans before kick-off… the Hammers faithful booed when they could.’

The Sun website: ‘KURT ZOUMA was loudly booed by both sets of supporters after his shock inclusion in the West Ham squad to face Watford.’

Mike Walters, Daily Mirror: ‘From the moment the teams were read out before kick-off, Zouma’s name was roundly booed, and it serves him right.’

And last but not least, Chris Matthews, James Robinson and Jamie Phillips of the MailOnline: ‘His every touch of the ball was met by loud booing from both sets of supporters.’

It sure sounds like ‘most of the home crowd were broadly supportive’.

Jesus, Chris
As for Chris Kirkland and his vague apology, maybe just don’t crowbar racism into a discussion about animal cruelty in future.

Wreck-it Ralf
Cristiano Ronaldo had three off-target shots and no discernible impact in 23 minutes as a substitute before storming down the tunnel after Manchester United’s 1-1 draw with Burnley on Tuesday. Headlines such as this from the Daily Mirror website therefore look a little weird:

Considering the article concedes that ‘it seemed like a wise decision’ to start Edinson Cavani ahead of Ronaldo in the first half, this is an odd stance to take. But apparently Ralf Rangnick ‘was ultimately left to rue his decision to drop Ronaldo’.

Well the bloke has not scored in any of his last four starts so one might suggest that the only Ronaldo decision Rangnick has been ultimately left to rue is playing him so much in the first place rather than eventually benching him at the start of a run of six games in 18 days.

Of course, we have been here before with the odd overreaction to a manager daring not to let Cristiano Ronaldo play every single second of every single game, which brings us to the ‘Sir Alex Ferguson advice’ mentioned in the headline.

‘Clearly, Rangnick did not take that same advice Ferguson offered to Solskjaer, as he opted against starting Ronaldo at Turf Moor.

‘With Ferguson – a man who continues to cast a huge shadow of his successors – sitting in the stands on Tuesday, Rangnick will be praying he remains silent this time.’

Mediawatch sincerely doubts Rangnick will be all that bothered.

‘One thing is for sure, however. If Rangnick drops Ronaldo, United have to win the game.’

And if Rangnick starts Ronaldo, United have to win the game. The same stands for literally every decision any Manchester United manager makes. It’s how this sh*t works.

Strop right now, thank you very much
Chris Wheeler of the Daily Mail also weighs in:

‘It was a bold decision by United’s interim boss considering the last time he took Ronaldo out of the action, at Brentford last month, the Portugal star had a major strop.’

During the celebrations of a third goal in a decent win, yes.

You Rang?
All of this, of course, points to how Manchester United are just as awful now as they were under Ole Gunnar Solskjaer. The Daily Telegraph thankfully shed a light:

There is no Ralf Rangnick revolution – Manchester United are no better than under Ole Gunnar Solskjaer | @thomgibbs analyses the stats, performances and mood since the change of manager at Old Trafford https://t.co/lAQvcNIFAm

‘The Rangnick revolution has failed to materialise,’ writes Thom Gibbs after 72 days of an interim managerial reign. ‘At this point it is worth asking – is he really much different to Ole Gunnar Solskjaer? Let us explore.’

* Rangnick’s ‘win percentage is healthier at 50 per cent’ to Solskjaer’s 41.

* ‘The xG numbers are rosier under Rangnick at 1.7 expected goals per game compared to Solskjaer’s 1.4.’

* ‘That is more pronounced if you look at xG against… Solskjaer’s was at 1.6, Rangnick has brought the number down to 1.2.’

* ‘That is borne out by the actual number of goals conceded, which are below one a game for Rangnick at 0.8 from an unsustainably high 1.7 for his predecessor.’

It is then pointed out that they ‘were scoring more under Solskjaer, 1.6 per game compared to Rangnick’s 1.3,’ which is fair enough. But is that the only regression under Rangnick? Pah. Not a chance. And this is huge.

‘There has also been a small decline in their passing accuracy which is 81.2 per cent under Rangnick, having been 84.1 for Solskjaer.’

Gibbs goes on to scoff at ‘narrow and unconvincing’ wins under Rangnick, rubbish the impact of his half-time team talks and point out that he is ‘hamstrung by the enduring lack of a top-level defensive midfielder, however well Scott McTominay is playing’.

Is that not testament to Rangnick’s coaching that McTominay is playing better?

‘United certainly seem more coherent when out of possession but the dying days of Solskjaer’s era did not set a high bar’ continues an article which sets out to underline that ‘Manchester United are no better than under Solskjaer’.

Therein lies the extent of the actual, statistical proof provided that Manchester United have not even vaguely improved: they are scoring slightly less often and their passing accuracy is somewhat down. Just don’t mention them being higher in the table while winning more games, conceding fewer goals, creating better chances and losing fewer games 4-1 to Watford.

It remains the case that Manchester City are the only team to earn more Premier League points than Manchester United since Rangnick’s first match on December 5.

We don’t talk about Bruno
Martin Samuel of the Daily Mail was on duty at St James’ Park to watch Newcastle parade the signing that has set pulses racing against Everton:

‘Newcastle were the better team, created the best chances and, having gone a goal down, showed enormous spirit to come back to win, particularly in the second-half.’

Shame about the hyphen but carry on.

‘That was when, attacking the Gallowgate End, they pinned Everton back and scored twice. Good goals, too. The first of them a little scrappy, but the second a cracker through Trippier.

‘He was the most impressive of their January recruits…’

Written like a true England fan. Signing a 24-year-old Brazilian international midfielder for £40m clearly isn’t for everyone.