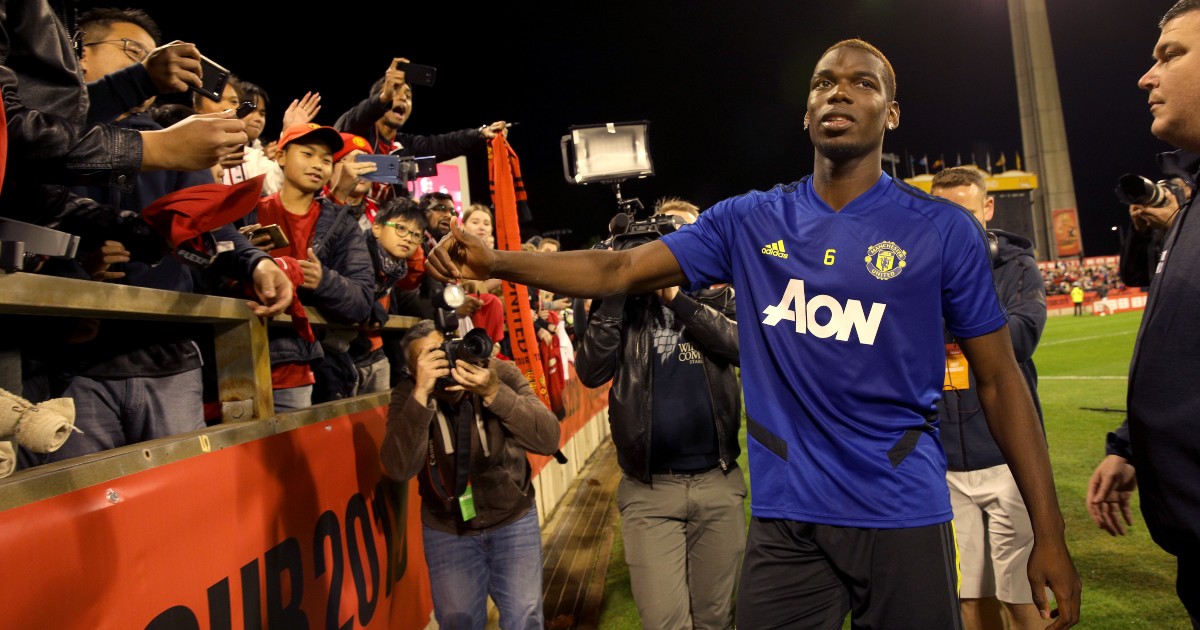 That bespectacled hipster Ralf Rangnick has done it again. He has said he might play an £89.3m midfielder if it benefits Manchester United.

Pog on the time
Spare a thought for the newspapers, who have had to fill their back pages without the help of an injured Paul Pogba for the last two or three months. But the Frenchman is back in Manchester United training and the Daily Mirror are forever grateful.

There are at least quotes from the Manchester United manager, which does make this legitimate headline news. But the way in which Ralf Rangnick’s words have been framed is questionable to say the least.

‘Rangnick admits he will play wantaway star to help him seal dream move to Real Madrid’ is a prime example. He ‘admitted’ no such thing; Rangnick said he will probably not just ignore £89.3m midfielder Pogba solely because his contract expires in the summer.

As Rangnick pointed out, his own contract also expires in the summer.

‘Ralf Rangnick has effectively confirmed Paul Pogba is leaving Manchester United – and said he will play him so he can get his dream move to Real Madrid.’

“The question is how much does he still want to be a part of this group? How much does he still feel emotionally and physically on board? He also wants to show up. He wants to show the fans of Manchester United, the board, the whole world, what kind of player he can be, even if it’s only to show enough for a new contract elsewhere. But, as I said, there’s a difference in how players deal with their current situation. How do they handle that? If they handle that in a professional way, an ambitious way, of course I will play players, even though they have a contract expiring in the summer.”

In no world does that equate to Rangnick saying he will play Pogba ‘so he can get his dream move to Real Madrid’. He said he will play Pogba, a part of his squad and someone who specialises in one of Manchester United’s more problematic positions, if he is ‘professional’ and ‘ambitious’ and it benefits Manchester United. Which is fair and obvious when you think about it for a nanosecond.

If part of his motivation involves securing “a new contract elsewhere” then that suits Manchester United in the short term. Funnily enough, that is probably fine by a manager who has an interim contract that expires in a few months.

Fan service
The Daily Star use a similar line, claiming that Rangnick will put Pogba ‘in the shop window so the World Cup winner can secure his dream move to the Spanish giants’.

The key part – that Pogba will have to perform well and earn his place in the Manchester United team like any other player before shop windows are involved – is skirted over somewhat.

Instead, Jeremy Cross is busy describing this as ‘a move that will stun fans’ as Rangnick ‘admitted Pogba…will be allowed to use United to showcase his skills in the coming months in order to get the deal he wants’.

Not sure those ‘stunned fans’ will care one jot if Pogba helps them finish in the top four, do well in the Champions League and/or guide them to the FA Cup.

Then there is Paul Hirst in The Times, who writes that Pogba using these next few months as an audition for his new club ‘will annoy those fans who think that he has taken United for a ride over the past couple of years’.

Again, they really will not give a sh*t as long as Manchester United gain an advantage.

Wreck-it Ralf
The Daily Mirror, and others who wilfully misrepresented Rangnick’s quotes on Wednesday morning, also offer no passable response to these questions the German posed during his press conference:

“For me it’s not a question if a player has an expiring contract, the question is how much does he still want to be a part of this group? How much does he still feel emotionally and physically on board? As long as this is the case, why shouldn’t Paul Pogba now, after two-and-a-half months of injury, being fully fit again now, play?”

“He will be highly motivated to do that and so why should I then not play him?”

Answers on a postcard, people. Because when you put it like that, it really would be stupid not to pick the ‘highly motivated’ £89.3m club-record signing.

Everybody get up, singing…
The following exclusive sits proudly towards the top of The Sun’s website, thanks to Charlie Wyett:

The implication is made clear in the wording: these ‘flops’ haven’t earned FIVE days off. This is preposterous and the latest example of poor management from crisis-ridden Manchester United, who have won four and drawn three of their eight crisis-laden games under crisis-plagued Ralf Rangnick.

Then you delve a little further into the story.

‘Some teams, like Southampton and Wolves, are giving their players an entire week off to recharge the batteries.’

‘Aston Villa’s stars are also getting nearly a whole week.’

‘Manchester City have decided to scrap their trip to Abu Dhabi and Chelsea manager Thomas Tuchel has chosen to give his players a few days off.’

So Manchester United giving their ‘flops’ – currently 7th and five points off 4th with two games in hand – a whole FIVE days off in the most congested schedule in modern football history is pretty standard. Below the known average, if anything.

Ron turn
Then there is this exclusive from the same outlet:

Spoiler: he still cannot QUIT, what with the remaining 18 months on his Manchester United contract. They might have something to say about it.

‘All-but’ cheek
‘NEYMAR has all-but confirmed Bruna Biancardi as his new girlfriend, taking her back to Brazil to spend time with his friends and family over the festive period’ – The Sun website.

It’s a relationship, not a transfer. And it’s also not football news.

And finally…
Mediawatch won’t bother shouting too far into the void when it comes to Stuart Brennan’s latest missive in the Manchester Evening News, but this ought to suffice:

'If petulant supporters of other teams get a lip wobble at City's latest win and claim they have made the Premier League boring, frankly, who cares?'

For one, probably the person who wrote more than 1,300 words about it.