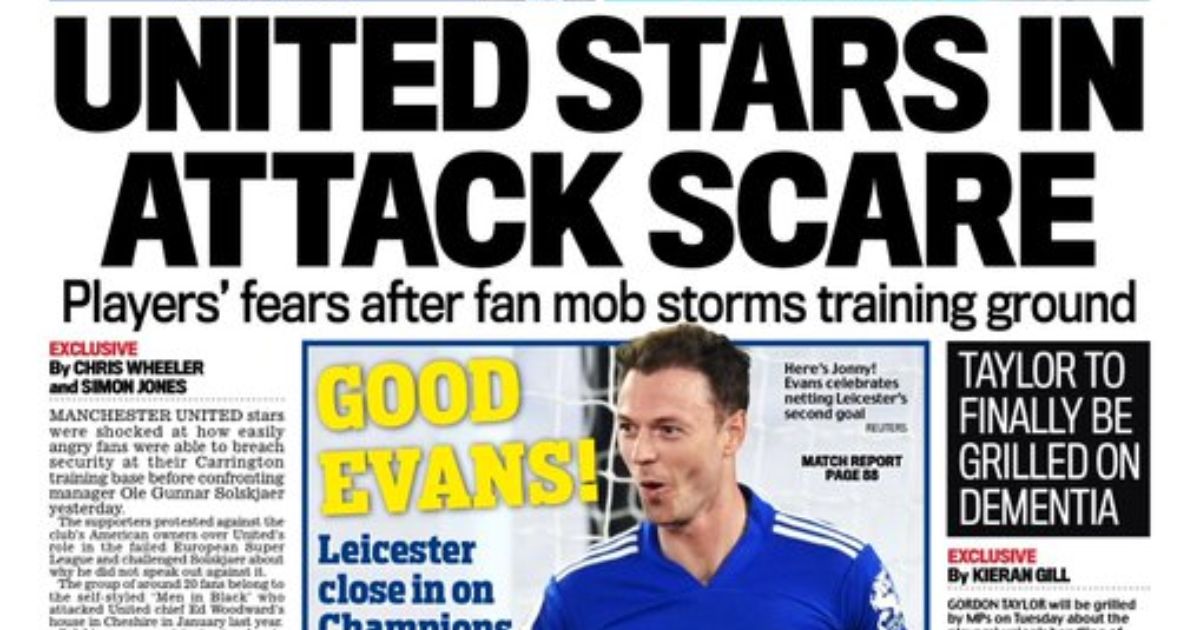 It worked for Rio Ferdinand when he said Newcastle fans should shut up or buy the club. Now that Manchester United ‘mob’ get the same advice.

Mobheads
‘UNITED STARS IN ATTACK SCARE’ is an incredibly eye-catching headline on the back page of the Daily Mail. It grabs the attention immediately for an exclusive from Chris Wheeler and Simon Jones.

They report that players ‘were shocked at how easily angry fans were able to breach security’ at Manchester United’s training ground ‘before confronting Ole Gunnar Solskjaer’ on Thursday.

Open the newspaper and you are greeted with another headline that jumps straight out:

‘SOLSKJAER AND MATIC CONFRONT THE MOB’

Thought those ‘angry fans’ were ‘confronting’ the manager and scaring off the players? Now Solskjaer and Matic have turned the tables on that ‘mob’ (whose peaceful protest caused absolutely no damage to either property or person) by… talking to them.

The Oxford dictionary definition of ‘mob’ is ‘a large crowd of people, especially one that may become violent or cause trouble’.

The Cambridge dictionary definition of mob is ‘a large, angry crowd, especially one that could easily become violent’.

The Merriam Webster dictionary definition of mob is ‘a large and disorderly crowd of people, especially one bent on riotous or destructive action’.

No violence. No riot. No destruction. No-one ‘bent on’ anything other than asking fair and legitimate questions during a peaceful protest that threatened nothing other than the scheduled time of the club’s first-team training session. One source describing a ‘meathead’ in the group who “soon piped down when Ole started talking to them”. Many references to ‘scared’ and ‘upset’ players with ‘concerns’. No mention of reports from those present that Bruno Fernandes, Dean Henderson and Eric Bailly actually overcame the immense terror to show their support.

But the best bit is this paragraph from Wheeler and/or Jones:

‘Despite a public apology from chairman Joel Glazer on Wednesday night, the group of protesters descended on the training ground at about 9am and blocked the entrances, before moving from the front security gate to the main building of the complex.’

Glazer apologised (for being one of the main brokers behind a breakaway league that endangered the entire English football pyramid, not for all the debt and mismanagement over more than a decade and a half and that), but a couple dozen supporters staged an entirely peaceful and rather brief protest ‘despite’ this, leaving straight after they had made their point. They should clearly have been happy with their lot.

Mediawatch would just like to congratulate Ed Woodward’s PR adviser Neil Ashton on his first column for the Mail since late 2015. Welcome back.

Dirty protest
The theme of fan-blaming continues in The Sun, who say that ‘the Glazer family let Manchester United down in the week, but so have the fans who stormed the training ground and broke onto private property’.

Tom McDermott, for it is he, says that ‘there is a way to protest and make feelings known and this isn’t it’.

Quite how is not made explicitly clear. It feels like this got the point across quite well, so it probably was the way to protest. No-one was hurt. Nothing was broken. Important questions were asked. This very article is proof it was worth it; would this still be in the news otherwise?

‘What did they think was going to happen? Joel Glazer to appear and hand over the keys?’

No. But then you already know that and are being performatively disingenuous. Carry on.

‘So, what can we do? Have a demonstration that doesn’t break the law outside of Old Trafford.’

They did that on Monday. That you seem to have forgotten suggests it did not have the desired impact.

‘What about starting a group to organise a takeover?’

Cheers, Rio Ferdinand. Let’s start a whip-round. Anyone got a spare £500m down the back of the sofa?

‘There was never a right time to do this but if there was, it would have been Sunday or Monday when the news broke.’

Again, some supporters staged a protest outside Old Trafford on Monday. They did literally what you suggest as an alternative yet you seemingly are not even aware. The point is for people to notice.

‘I question the intelligence of these individuals.’

Be fair, you do more than that. You said on Twitter that they ‘probably didn’t attend school that often’. Then you added injury to literal insult:

I’d be interested to do a podcast with one or more of the people that turned up at Carrington this morning. DMs are open…. #MUFC

‘You are all stupid people but do you fancy doing a podcast with me?’ 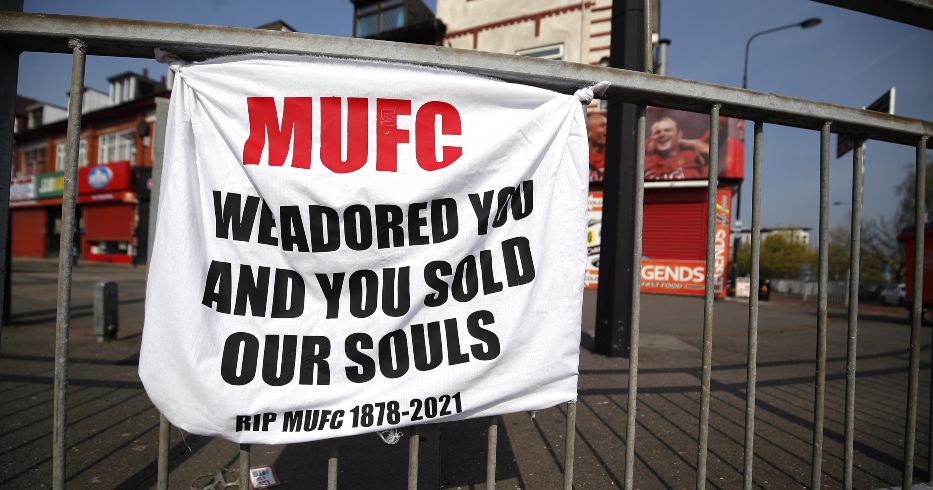 Fear factor
The Daily Mirror pitch in with this in Jeremy Cross and David McDonnell’s exclusive:

‘It is understood Solskjaer yesterday feared fans might return to the complex and was concerned about the welfare of his stars.’

They are alone in suggesting there was a risk of physical harm posed to anybody. Hell, The Sun reject sensationalism in favour of quoting a source saying thus:

“It wasn’t violent and the training ground staff and players weren’t threatened.”

Because obviously. If they were that would justifiably be the story and legal action would and should have taken place.

Credit to The Sun and Neil Custis (Mediawatch is shocked too) for their back page. He offers a balanced account of the situation, pointing out that ‘a couple of the players did signal their support to the protest group when they finally came back to move their vehicles after speaking to Solskjaer’.

He adds that ‘during the discussion a police van arrived at the training-ground car park but a member of United’s staff told them to stay in the vehicle and said everything was under control’.

We need to talk about Kevin
Sadly, it is Mark Irwin whose Sun column is ‘the talk of sport’. And you can see why:

‘So while it’s all very well for Kevin De Bruyne to denounce the blink-and-you-miss-it League on social media, maybe his protests would carry more resonance if he hadn’t also just signed a new contract worth north of £350,000 a week.’

Maybe his protests carry more resonance because he just signed a new contract worth north of £350,000 a week. Maybe that was a silly thing to say.

‘But the players also have to take some of the responsibility for the sordid mess which has played itself out over this week.’

Silly players for not turning down the exorbitant wages offered to them by those poor owners.

Are we allowed to protest that headline? If so, where?

You’re a wizard, Graham
And then to Tom Barclay in The Sun newspaper:

‘A Potter with a big scar on his face – but this time Lord Voldemort had absolutely nothing to do with it!

‘Graham Potter looked like he had been in a fight with the nemesis of his wizarding namesake Harry when he faced the media yesterday.

‘The Seagulls chief was sporting a huge shiner under his left eye.’

Famous for his black eye, that Harry Potter fella. pic.twitter.com/yDmlcyDzxu

Well played, Simon Bird of the Daily Mirror, for managing to get that out of him.

Recommended reading of the day
Rory Smith on the Super League collapse.