Manchester United have a hat-trick of pretty terrible 'warnings'. And Liverpool's 'boys' impressed. 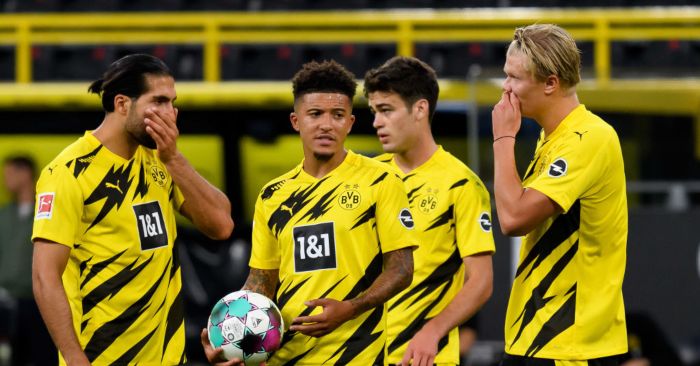 ‘to tell someone about something, especially something dangerous or unpleasant that is likely to happen, so that they can avoid it’

Bear that in mind when glancing at the back page of the Daily Mirror on Friday.

Manchester United there, kind enough to advise Borussia Dortmund to ‘avoid’ the prospect of rejecting an offer below their valuation of Jadon Sancho a month and a half after their deadline has passed, and little over a week before the transfer window closes and the Bundesliga side are unable to sign a replacement in time.

How ‘dangerous’ and ‘unpleasant’ it would be for them to keep a happy first-team player who still has three years left on his contract, even though Manchester United have low-balled them all summer and will seemingly continue to do so.

‘TAKE IT OR LEAVE IT’ really is a dreadful ‘warning’ from a club the media is still desperate to paint as tough, no-nonsense negotiators. What will they do when Dortmund go for the second option?

The Daily Mirror seems to have a problem with that particular word.

Let’s scan through these quotes for what is sure to be an acerbic ‘warning’.

“I think last season proved to us how we can defend at our best.”

“Last weekend wasn’t fantastic, we conceded sloppy goals, but I think our defensive record from last season was good with Eric and Harry, and how good a partnership they were.”

“Eric is fit again, which is a big, big plus, and we’re looking forward to seeing him develop and play more games. We’ve been waiting him to be fit and play more regularly.”

And to think everyone said he wasn’t ruthless enough. Apply lukewarm water to the affected areas, fellas.

And to complete the Daily Mirror set:

Oh wow. Has he called him out on his haircut? Told him that he’s going to sh*t in his gloves? The suspense is killing us…

“I’ve been playing a lot since I was very young but right now I feel probably the best I’ve felt in my career.”

Don’t go for the jugular straight away. Alright. No problem. Keep that tension rising.

“Now it’s time to be back to winning ways and winning trophies, that’s the most important thing for us at the moment. Like I say I feel very, very good.”

Hold on, this ‘warning’ will be along soon.

“We always try to learn from each other and try to push altogether. It’s great. If you see the training it’s really good to see the goalkeepers together.”

“It’s very important to have good feelings with the other goalkeepers and the goalkeeping coaches as well. It’s great. We are training, like I say, very, very well – the whole department of keepers.”

Oh. Genuinely not sure which of those three Manchester United ‘warnings’ is worse.

‘MOVE over Chelsea, there’s a new bunch of kids in town,’ reads the opening paragraph to The Sun‘s match report on Liverpool’s crushing victory over Lincoln.

So far, so fine. They started three teenagers and brought another on. Fair enough.

‘Stamford Bridge has been the breeding ground for the best young talent coming through in England, but Liverpool now boast a crop ready set the world alight.’

‘It was men against boys – and youth came out on top.’

Ah. See, you’ve gone a little too far there. The ‘men’ of Lincoln named a starting line-up with an average age of 23.1. Liam Bridcutt (31) was the only player in their entire matchday squad over 26.

The ‘boys’ of Liverpool had a pretty young side out at an average age of 23.8, but the sleuths and mathematicians among us might notice that they were actually the older side.

Did you actually look at the teamsheets or just assume this lower-league side would be a bunch of bruising cloggers?

‘Imps boss Michael Appleton had instructed his players to get stuck into the champions, to unsettle them and show them what senior football is all about.’

‘It was actually a golden oldie who set Liverpool on their way – Xherdan Shaqiri sending a ninth minute free-kick dipping and curling into the top corner.’

That ‘golden oldie’ is 28, or in what many consider to be the peak years of a general footballer. Do you have any concept of age whatsoever?

Liverpool literally brought on three substitutes they signed for a combined £137.45m. Lincoln paid a fee of any kind for less than half of their 18-man squad.

But of course this League One side making four changes should have competed for 90 minutes with a team of European champions, experienced internationals and expensive signings.

Also in Duncan Wright’s write-up was this line:

‘Jurgen Klopp watched on as his dazzling youngsters turned on the style to seal a fourth round clash with Arsenal and Mikel Arteta is sure to be a worried man on the evidence of this display.’

He will be absolutely bricking himself about facing a team and manager he has faced and beaten twice in recent months in a cup competition that both will rank at the bottom of their list of priorities.

For those keeping count, Liverpool will go a 155th consecutive Premier League game unbeaten against Arsenal on Monday. Love you, Mark Lawrenson.

‘Solskjaer hints that he could drop struggling Man Utd player’

Except he doesn’t. He just praises Eric Bailly a bit. Although it is more of a ‘hint’ than a ‘warning’…