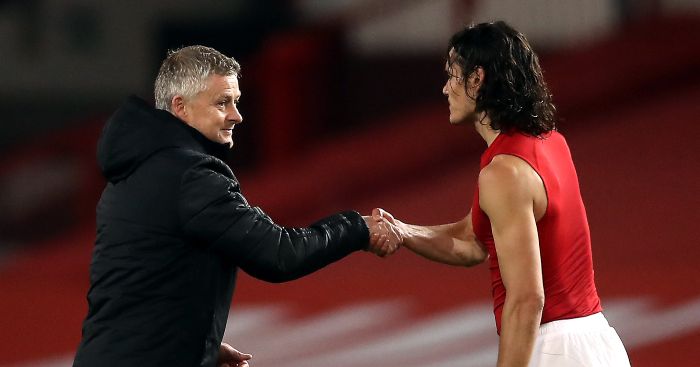 Nevermind
After tipping a Premier League title challenge on the back of a 1-0 home victory against winless West Brom thanks to a retaken penalty, Neil Custis does not disappoint in his assessment of Manchester United beating Turkey’s sixth-best team for The Sun.

‘THIS is what Manchester United can do, in form and in the mood. Can we see this every week? Their fans will ask.’

Well sure, but it was just Istanbul Bas…

Oh right. Didn’t think of that. ‘Never mind’ is an absolutely fair point. Crack on.

‘This is a side that broke the monopoly of the big three in Turkey last season to lift the title.’

And one that started this Turkish Super Lig season with three consecutive defeats. They sit sixth in the table after losing their most recent game. But ‘never mind’.

‘A side that beat Manchester United last time out, proving that if your just off your game in the Champions League you will come unstuck, the standard is that high.’

Whereas the standard for apostrophes apparently is not. And praising Manchester United for beating a poor side they lost to three weeks ago is a bit like hailing someone for sh*tting themselves but having the wherewithal to change their clothes a bit later.

They knew what they did last summer
‘So while the opposition might have been mediocre, there was still just a hint that Manchester United did, after all, know what they were doing last summer,’ reads the final paragraph to a piece by Andy Dunn in the Daily Mirror.

He liked what he saw from ‘disciplined attacking fulcrum’ Edinson Cavani. He saw ‘enough tidiness’ from Donny van de Beek to support calls for an extended first-team run. But he was most impressed with ‘ultra-modern’ Alex Telles, who should bring ‘stiff competition’ for Luke Shaw.

Back to the ‘hint’ that United’s recruitment team ‘knew what they were doing last summer’, though. Here is Dunn on October 3:

‘Chelsea finished last season level on points with Manchester United and have recruited in numbers. How wisely that recruitment has been remains to be seen.

‘But at least they looked as though they had a plan – it does not look that way at Old Trafford.

‘Sevilla’s director of football Monchi gave an interview last week in which he said he simply could not believe Manchester United did not have a sporting director.

‘And on the evidence of this extended transfer window, he has got a point.’

By November 5, Dunn was writing that ‘the plot appears to have been lost’ in the transfer department at Old Trafford. That ‘you wonder if United’s transfer set-up is fit for purpose’. That it was a ‘haphazard’ and ‘mysterious’ summer. That ‘Solskjaer’s position is clearly under threat… thanks in no small part to an unfathomable transfer policy – win, lose or draw at Everton – it looks pretty untenable.’

Less than three weeks later, and after a routine win over a poor side that followed an unconvincing victory over one just as bad, they have this transfer lark nailed.

Moving on up
Paul Pogba did not play on Tuesday but everyone knows the rule: he must be mentioned whenever possible, regardless of relevance.

Credit to the Manchester Evening News for this one.

Poor Samuel Luckhurst writes 925 words, only two of which are Pogba. Definitely worthy of a headline.

Looking for Eric
At least Pogba was mentioned. That is more than can be said for this Sun website player ratings piece…

…which does not refer to Cantona at any point other than the headline.

Past away
As for the actual point Luckhurst tries to make for the MEN, it is perhaps a little premature.

After referring to the injury that ruled Pogba out as ‘a sequel to his ankle ordeal last season’ that ‘is seemingly in production’, he goes awful big.

‘Pogba is still present at Manchester United but may as well be consigned to their past.’

This is the same player that was ‘more expressive in an advanced role’ in a 5-0 win over Leipzig less than a month ago, which included an assist that ‘was measured so expertly it utilised the Manchester rainfall glistening on the blades of grass’.

But now Manchester United have beaten Turkey’s sixth-best team at home, so Pogba can sod off.

Maroon thrive
That Luckhurst piece also suggests ‘the mood is unrecognisable from the gloomy night by the Bosphorus at the start of the month’, in part because Manchester United ‘are no longer marooned in the bottom half of the league table’.

Because being 10th by virtue of scoring a single goal more than Crystal Palace is absolutely cause for celebration.

Silent treatment
But back to Pogba. It’s the law, you see. The Daily Mirror website knows it.

It is an article about the Frenchman updating his Instagram story with a message of support to his teammates. He posted the message at around midnight. His ‘silence’ lasted about two bloody hours.

Laying down the Law
There are few things that football fans love more than getting irate at shortlists. ‘Why is the manager of my club not up for this monthly award that doesn’t matter? Typical big club bias’ they cry. ‘How has this player at a team I despise and who has scored 427 goals this season been nominated for an individual honour I had never heard of before this very moment but am now incredibly angry about?’ they protest.

For a football journalist to engage in such behaviour is fun. So the floor is all yours, adult human Matt Law of the Daily Telegraph:

Chris Wilder, Frank Lampard and Dean Smith all did better jobs than Bielsa last season. But they are English so they are not allowed to be nominated or recognised. https://t.co/7hZMa4mjvM

Chris Wilder is a fair shout. He took Sheffield United to ninth in the Premier League after promotion, in part through genuine tactical innovation, on a meagre budget. But it should be noted that coaches were nominated by an expert panel ‘based on their respective achievements during the period between 20 July 2019 to 7 October 2020’. That takes into account much of United’s historically bad start to this season.

Perhaps Bielsa shouldn’t be on there ahead of certain people for getting Leeds promoted with an ordinary squad and middling wage bill. It doesn’t actually matter, it should be said. But to make this an issue of nationality by bringing in Frank Lampard (appointed by a side that finished 3rd and lost their best player, took them to 4th with one of the strongest squads and highest wage bills) and Dean sodding Smith (started this season brilliantly but spent over £120m to finish 17th, a point clear of relegation last campaign) is b*llocks.

Then you remember that Law supports Aston Villa and writes extensively about Chelsea and all becomes a little clearer. Someone clearly took Patrick Bamford’s hat-trick last month really well.

One in the eye for everyone thinking he wanted it to go down to the wire.

Recommended reading of the day
Jonathan Liew on Manchester United.