Home Mediawatch Did you miss ‘the unfolding drama’ at Manchester United? 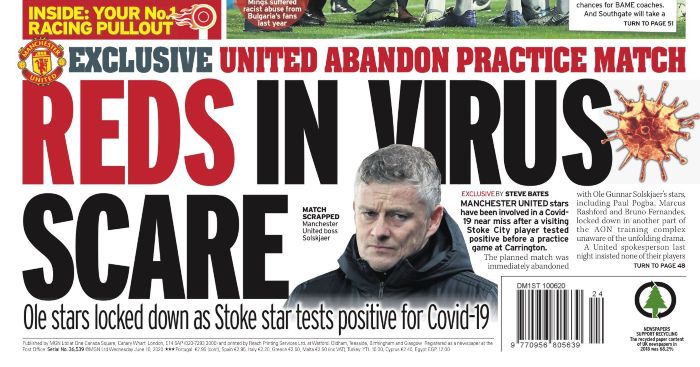 Mirror effect
Manchester United were scheduled to play Stoke in a behind-closed-doors friendly at their Carrington training complex on Tuesday. The Championship club cancelled shortly before kick-off after manager Michael O’Neill tested positive. That is certainly newsworthy.

But does it really call for a back-page headline of ‘REDS IN VIRUS SCARE’, accompanied by a glum picture of Ole Gunnar Solskjaer and some bacteria?

The Daily Mirror certainly seem to think so. Although it should be noted that their exclusive makes reference to both a ‘Stoke star’ and ‘a visiting Stoke player’ testing positive. O’Neill is 50 and retired in 2004 but someone clearly thinks he can still do a job.

So what of this ‘VIRUS SCARE’? How close did we come to losing Phil Jones?

‘Manchester United stars have been involved in a Covid-19 near miss after a visiting Stoke City player tested positive before a practice game at Carrington.’

Well ‘VIRUS SCARE’ has already been downgraded to ‘near miss’. That doesn’t bode well.

‘The planned match was immediately abandoned with Ole Gunnar Solskjaer’s stars, including Paul Pogba, Marcus Rashford and Bruno Fernandes, locked down in another part of the AON training complex unaware of the unfolding drama.’

And from ‘VIRUS SCARE’ and ‘near miss’ we go to ‘unaware of the unfolding drama’. That’s quite the devolution.

Over to you, unnamed source.

“It could have been a scary situation.” But it wasn’t, because Manchester United acted quickly to ensure no-one came into contact with the Stoke squad and staff members, who left the premises immediately.

Wear and scare
That story was still top of The Sun‘s website as of 11am on Wednesday morning. The headline?

Poor Man Utd really are the victims in all of this. It’s enough to make you wonder how Solskjaer managed to quickly arrange an intra-squad friendly instead, despite everyone clearly being petrified about not coming into contact with someone who had tested positive.

Aces of fear
But what story replaced that one atop The Sun‘s website at lunchtime?

Because the only way to advance news in 2020 is to get eight pictures of people turning up for work in expensive cars.

Our thoughts are with the Manchester United friendly at this difficult time.

Train spotting
With footage from that friendly unavailable, the Manchester Evening News have had to make do with a highlights package from Monday’s training session.

They ‘spotted’ five things, including:

1) How Bruno Fernandes ‘didn’t hesitate to get stuck in’. Because it was seemingly uncertain whether someone who has attempted 29 tackles and committed five fouls in as many games would get involved in the physical side of things.

2) James Garner and Angel Gomes ‘operated as floaters’, which sounds a tad harsh.

3) Paul Pogba ‘hasn’t lost his touch’. What a relief for a professional footballer and World Cup winner who is fully fit, has been training for a while and last played in December.

4) Rashford and Fernandes were on the same team.

5) Joel Pereira was there. Much like every other contracted and available player.

Neutral venue
The wait goes on for Simon Jordan to issue an apology to Marcus Rashford, Jordan Henderson and every other Premier League player he insisted “didn’t want to help in the first place” amid the ongoing global pandemic. They were using the PlayersTogether initiative as a ‘smokescreen’ (to raise million for NHS charities), remember?

In the meantime, his thoughts on how “the pitch is a place of neutrality” will do.

“I don’t believe any message – political, societal or any other persuasion – should be voiced on the pitch,” he told talkSPORT.

Jordan adds that players “have an absolute right to use their influence via the enormous reaches they have through digital media, through print media, through their social-media platforms to, within reason, say what they want”. Which is very benevolent of him.

But “sport should be a neutral place, solely for the benefit of sport, and not for opinions”.

Since when was calling for justice for George Floyd and stating that black lives matter considered a “political opinion”?

Fate accompli
Mediawatch has covered BT Sport‘s ‘Script of the Season’ before. A harmless bit of fun, it was a sort of Premier League season prediction that was ripe for the picking of online aggregators. The Daily Mirror, for example, got a bit silly at the time, and even referenced it again in March.

The Liverpool Echo are not about to let such an opportunity pass them by.

Now ‘Liverpool’s Premier League fate’ was ‘predicted’ 11 months ago. By a ‘controversial document’ that no-one – particularly those behind it – took seriously. And their ‘Premier League fate’ back then was to finish second to Manchester City. So that seems to carry no real relevance now.

And look how ‘fuming’ Fabinho was (the entire premise was that you can’t ‘script’ a season so BT had players and pundits destroy it or laugh it off as part of their promotional material).

🥊| Safe to say Fabinho doesn’t agree with that BT script for the 2019/20 season #LFC 👀😂 pic.twitter.com/RK6LlqlgqU

But the Echo ignore all that to take an already immaterial last nine predicted results further out of context, which they know doesn’t really work.

Mediawatch sure does look forward to Liverpool winning the title in their second round of fixtures before losing 4-1 to City and 3-1 to Arsenal. After all, the ‘controversial document’ (published almost a year ago that had Liverpool finishing second) has spoken.