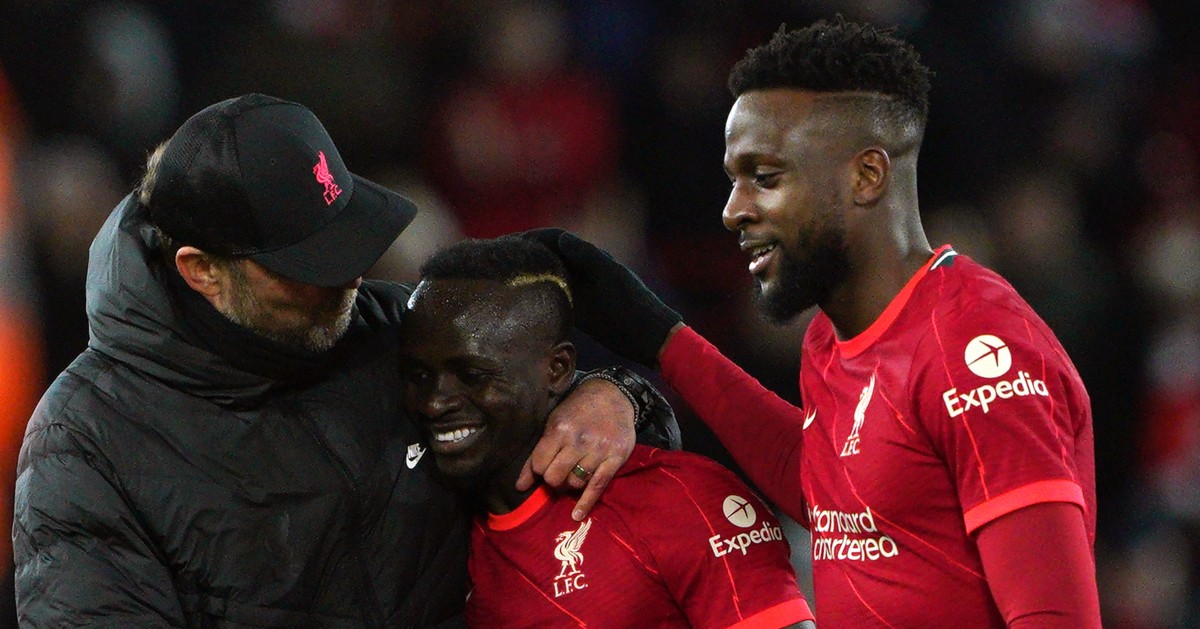 Diego Simeone clearly does not like shaking hands with bespectacled Germans. But Liverpool forward Sadio Mane is content to break all records.

Shake it off
Great result for Manchester United, that. A solid draw away at Atletico Madrid, with home advantage in the second leg of their evenly-balanced Champions League last-16 tie. Perfect. No problem.

Except ‘Diego Simeone walks straight down tunnel and refuses to shake Man Utd boss Ralf Rangnick’s hand after Atletico draw,’ as The Sun website tells us in some truly monumental news.

‘Simeone was in no mood to hang around at the full-time whistle – storming straight down the tunnel with no handshake for Ralf Rangnick.’

This is huge. Unbelievable stuff.

‘It’s unclear whether there was a disagreement between the managers or Simeone just couldn’t wait to get off the pitch.’

Diego Simeone on October 19 last year: “I never shake hands after a match, because I don’t like it. It isn’t healthy for either the one who wins or the one who loses. I always go without shaking hands at the end of the game.”

Diego Simeone on November 2 last year: “I don’t like the handshake greetings after the match as they are the emotions of two different sides in different emotional minds. I know in the UK it is a custom and all about chivalry, but I don’t share it and I don’t like the falseness.”

Yep, proper mystery. Can’t believe he did that thing he always does.

To the Victor go the spoils
Victor Lindelof comes in for a great deal of flak, despite not being one of Manchester United’s four or five worst players at the Wanda Metropolitano. Gary Stonehouse of The Sun lays it in pretty thick:

‘The surprise choice of Victor Lindelof at right-back in place of Aaron Wan-Bissaka and Diogo Dalot raised a few eyebrows but it failed to provide a spark that Ralf Rangnick was looking for.

‘His two defensive rivals offer far more going forward and are a lot more comfortable on the ball, which resulted in United having no outlet on the right.’

Lindelof’s passing accuracy was 93.6%. The closest any Manchester United starter got to that was 89.6%. Sounds like he was pretty ‘comfortable on the ball’, really.

And is that the first time Wan-Bissaka has ever been said to ‘offer far more going forward’?

Record player
Liverpool closed that Manchester City gap to just three points by hammering Leeds at Anfield. That much is common knowledge. But what you might have missed is Sadio Mane’s record-breaking streak.

‘Jurgen Klopp reacts to “absolutely insane” Sadio Mane as Liverpool star breaks record,’ says the Daily Mirror website. And it is a pretty strong start in the opening paragraph:

A phenomenal achievement, to be fair. pic.twitter.com/WBgSLcAWYG

By the fifth paragraph, we technically get a little nearer to discovering the nature of this ‘record’.

‘The brace from Mane means that he is the second-highest scoring player in Premier League history with 106 goals, moving above Didier Drogba after his successful time at Chelsea.’

They are so, so very close to saying what they want to.

Hopefully when they do finally get to the point, we can all agree that Mane has absolutely not broken a record in becoming the second-highest African scorer in Premier League history. That is not how it works.

Echo chamber
Speaking of records that aren’t records that Mane achieved on Wednesday evening, the Liverpool Echo tell us…

At least there is no confusion this time: ‘Sadio Mane became the first player to score more than 10 goals in eight consecutive Premier League seasons with his brace in the 6-0 win against Leeds United.’

Except that’s not really a record, is it? Wayne Rooney scored more than 10 goals in 11 consecutive Premier League seasons. Sergio Aguero did it across nine campaigns.

Sure, they mean players currently in the top flight. But that rather defeats the purpose of calling it an ‘incredible Premier League record’ when one of those that has already bettered Mane’s new ‘record’ that ‘only Harry Kane could match’ left just a few months ago.

We do talk about Bruno
‘Player x breaks record y’ is an especially website-friendly headline. It sounds grandiose and impressive, while simultaneously taking a matter of minutes and aimless word count padding to produce.

That is how we get the Mane guff, as well as stuff like this from the Daily Mirror website:

Fernandes got his seventh Champions League assist of the season against Atletico. James Milner has the most assists in a single Champions League campaign with nine. The former is ‘set to break’ the latter’s mark, despite being three assists off doing so and potentially playing just one more game.

‘Although Fernandes is close to the record, he may struggle to break Milner’s impressive tally before United’s European journey comes to an end.’

From ‘set to break’ in the headline to ‘may struggle to break’ by the fifth paragraph is a startingly predictable climbdown.

Most tabloid first paragraph of this and most days
‘FOOTIE ace James Maddison has netted some gems in his time – but now he is flogging pearl jewellery for fellas’ – The Sun website.

Mediawatch can only wonder if the words ‘footie ace’ have ever been spoken out loud.