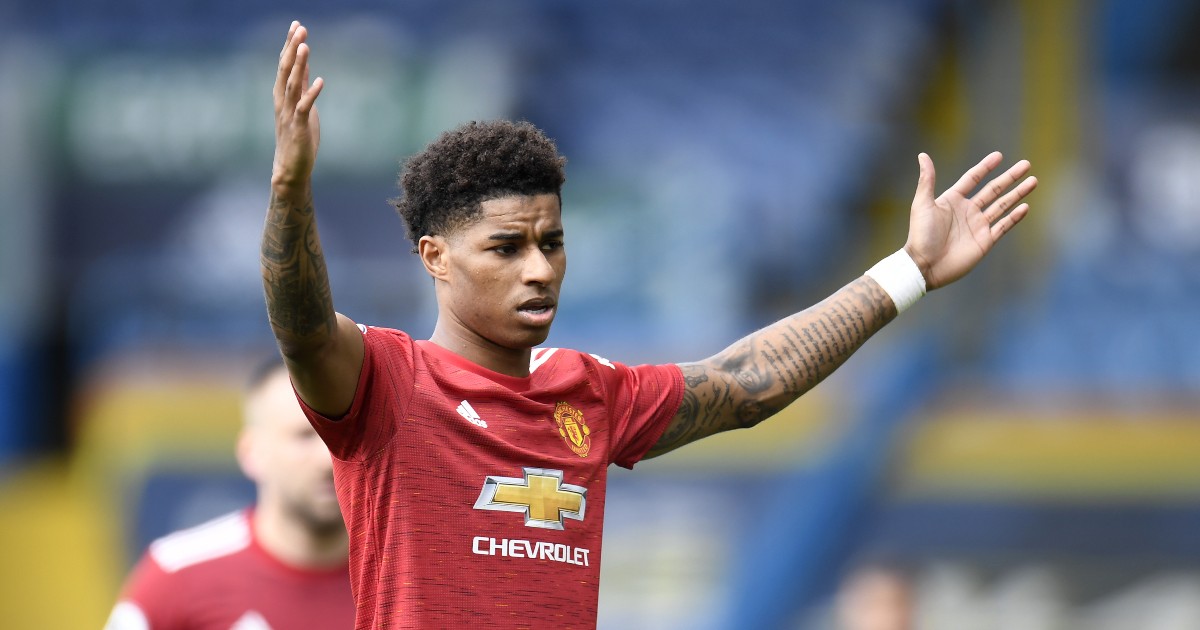 Marcus Rashford starred in a friendly and was honoured for his campaigning. But he must ‘prove he can save lives – and fulfil his huge talent’.

Marcus Rashford became the youngest ever recipient of an honorary doctorate from the University of Manchester on Thursday, collecting a degree for his continued campaign against child poverty. The 23-year-old dedicated it to the “millions of families across the UK” who “lost a lifeline and a means of staying afloat” with the withdrawal of universal credit a day prior, describing the award as “bittersweet” and emphasising that there was much more work to be done.

By that same evening, The Times stressed that ‘It’s time for Marcus Rashford to prove he can save lives – and fulfil his huge talent,’ as if those two things are even vaguely of equal importance.

It is crucial to point out two things at this juncture: Matt Dickinson’s piece is not quite as objectionable as that headline, nor as bad as the last time broadsheet journalism sought to knock Rashford down a peg. It is, however, still pretty bad.

Dickinson starts by recounting a recent conversation he had with relatives, ‘generations of season ticket holders at Manchester United,’ who asked him: “When are you journalists going to also write that his football has gone off track. Don’t you think you are tip-toeing around that in all the celebrations of his good work?”

‘It seems like the week to think about it,’ Dickinson continues, despite it being precisely the sort of week in which his work off the field should be the only focus, what with recognition from the University of Manchester and Rashford not having kicked a ball since the Euro 2020 final.

But the striker scoring a couple of goals in a behind-closed-doors friendly this week makes him fair game as ‘a young footballer with a lot still to achieve and to prove,’ which could literally be said of Erling Haaland or Kylian Mbappe but then they aren’t simultaneously trying to make sure children don’t go hungry. Clever sods.

Also, Rashford has scored or assisted 70 goals in 101 games for Manchester United across the last two seasons. That is quite good and at least some slight proof that ‘he can save lives – and fulfil his huge talent,’ if you really do insist on that having to be a thing.

The most frustrating aspect of all this is that Dickinson actually acknowledges and accepts the completely legitimate reasons for Rashford’s disappointing end to last campaign. He mentions the pulled ligaments in his right foot that meant he often ‘could only wear trainers, not his usual boots’. He brings up a shoulder injury suffered last November that required painkilling injections and meant Rashford was ‘compromised when holding off opposition, jumping for headers or simply running at full speed,’ citing statistics that emphasise what excellent form he was in before and how that was obviously and understandably impacted.

Did he injure his foot and shoulder while campaigning to ensure young people across the country did not go hungry? That much is not made clear.

‘His looming task is to show this was just a matter of difficult circumstances,’ continues Dickinson, who just a couple of paragraphs earlier literally tells us how Rashford scored ‘eight goals in 11 games for club and country before the [shoulder] injury and 15 in 52 thereafter’. It might just have had something to do with those ‘difficult circumstances’ rather than him being distracted by a quest to embarrass politicians into making necessary decisions.

Then comes the dreaded question with regards to Rashford’s campaigning: ‘How much time does it take up?’.

As much time as it needs to. He is trying to make sure children do not go hungry. If that is how he chooses to spend his free time outside of his duties for Manchester United and England, which have literally never been inhibited by what he does off the pitch, what does it matter? Should footballers just be robots, shells who turn up to training every day and attend two or three matches a week before returning to their homes and sitting in a dark room until the next time they are told to kick a ball? They are not lifeless, emotionless drones. They have hobbies, likes, interests, pastimes. They are allowed to think about things away from the field. And crucially, they are capable of doing that without it impacting their game.

Dickinson presumably does plenty of things outside of work and is able to balance everything while retaining a focus on his job. It would be insulting for someone to tell him he still had a lot to prove in football journalism, to question whether he was investing enough time in his work or affording too much attention to other stuff.

As for Rashford, his relentless campaigning against child food poverty does not mean he is above footballing criticism. His displays should still be critiqued normally when he returns and he himself will expect as such. Dickinson is, after all, a senior sports writer for The Times. But a) Rashford’s form over a sustained period is still very good, b) injuries have played a far more substantial part in any drop-off, and c) it is naive and facile to put any completely human dip in performance levels, every missed chance or errant pass, down to potential distraction at attempting to ensure people across the country are fed.

Some fair points are made about the battle to reintegrate himself as a starter in a Manchester United attack that was stronger than when he last played. But to tell Rashford he must ‘prove he can save lives – and fulfil his huge talent,’ that ‘it would be great to think that he can have it all’ and to ask how much time he is dedicating to combating child food poverty in this of all weeks is disingenuous, underhanded and an unnecessary deflection from his phenomenal work thus far. He has just scored two goals in a behind-closed-doors friendly and been honoured for his work off the field within a matter of days. His recovery is on schedule and he has still been able to campaign away from football. The only thing Rashford has ever done is prove he can do both simultaneously; not once has either been impacted by him focusing too much on the other.

Mediawatch knew this sort of thing would happen. That doesn’t make it any less tiresome or infuriating when it does.