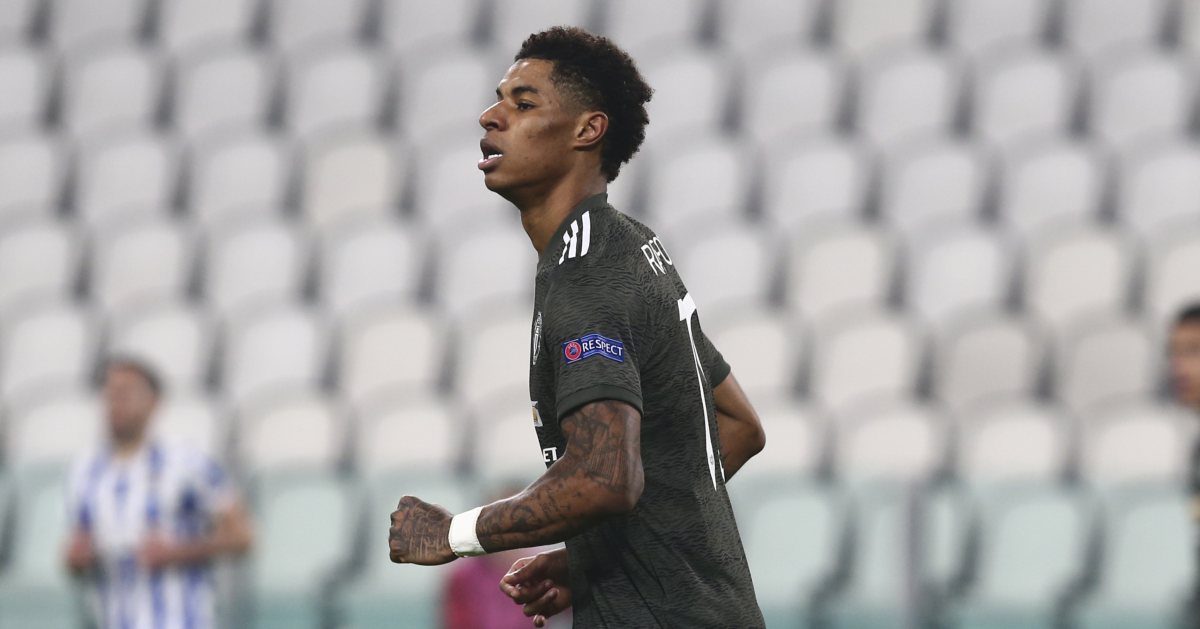 A theme is emerging

Mason Greenwood will be almost 24 when the contract he signed at Manchester United this week is due to expire. What sort of player will he be in 2025 and perhaps, more pertinently, what type of man will he have become? – @LukeEdwardsTelehttps://t.co/A4P6z2tIAq

Hopefully not the ‘type of man’ who would suggest that Marcus Rashford needs to choose between playing football and feeding children.

Rash vest
Marcus Rashford sensibly stopped thinking about child poverty for 68 minutes on Thursday night as he scored his 17th goal of the season, keeping him on track for the most productive campaign of his career. So what is The Sun website’s ‘verdict’ on this performance, coming in a 4-0 win that is described as a ‘rout’ in the actual newspaper?

Why, this of course…

After an era when players were derided as ‘no Ronaldo’ or ‘not as good as Messi’, are we entering another where a 23-year-old with 84 career goals is criticised for who he is not? It really seems we are. Or at least we are as long as crowbarring Haaland and Mbappe into a headline brings precious clicks.

‘It is true that the big competitions are often the making of world-class players but Rashford still has some way to go to match Mbappe and Haaland overall, given his career ratio of three games per goal for United.

‘The Paris Saint-Germain forward may play in a better team and a less renowned league but boasts a 1.37 games per goal tally, and such counter arguments could not be made of the Barcelona side he buried on Tuesday.

‘It is hard to make similar claims against Borussia Dortmund and yet Haaland still averages more-or-less a goal every game.’

Because – and we feel like we might have to make this point about 427 times over the next five years – Rashford is neither as gifted as Kylian Mbappe nor as lethal in front of goal as Haaland. And that really is okay. He is probably fine with that as long as he continues to play for his beloved Manchester United and helps them pick up the occasional trophy. Oh and makes sure that millions of children are fed.

‘There is absolutely no doubt that Rashford will be a very good player for years to come and he may have his hands on some serious silverware before long.

‘But this week has seen a marker laid down by those heading for the very top, can he meet it?’

Pesky fact: He doesn’t need to.

Scouse of no fun
Only the most miserable man in football journalism writing for a newspaper quite rightly never bought on Merseyside could use his column on the day before Everton take on Liverpool with just three points separating the two teams to a) lead on Everton boss Carlo Ancelotti being an ‘honorary Scouser now he has passed his Merseyside initiation test’ of having his house burgled and then b) write about Ancelotti’s Merseyside honeymoon potentially coming to an end. Mark Irwin of The Sun, you have truly surpassed yourself.

Apparently they ‘are clinging on for seventh place’, which is one way of saying that they are in seventh place, ahead of Aston Villa, Tottenham and Arsenal, who are in no great form of their own. They are also eight points better off than the same stage last season so although things are not going quite as well as they were in October, they have been without their best defensive midfielder since before Christmas and their top scorer in their last two Premier League defeats. Before those back-to-back defeats they had lost only two of ten Premier League games and reached the quarter-finals of the FA Cup.

‘Yet they would still need to win by six tomorrow to go above Liverpool in the table with a game in hand.’

How utterly embarrassing for them.

Save your kisses for me
There are many things that are weird about football journalism. Embargoes are weird, the little huddles after press conferences are weird, threats to call the police after these little huddles and embargoes are ignored by outsiders are really, really f***ing weird. But one of the weirdest things is the notion that journalists are not supposed to discredit other journalists’ stories. Because of a sacred brotherhood.

So when Duncan Wright of The Sun writes a back-page ‘exclusive’ (‘ANOTHER BIG EXCLUSIVE’) that ‘MANCHESTER CITY have slashed their offer to Lionel Messi by a staggering £170million’, nobody is supposed to stop and ask whether that is true, but simply applaud their fellow scribe for an excellent scoop.

Present situation on Lionel Messi via @ManCity. There have been no offers made, either in the summer, or since. And there are no talks.

…they are presumably supposed to put their fingers in their ears and sing ‘la la la’ because somebody who does a vaguely similar job has put their name to this now-discredited story.

We cannot include his tweets here because he has long since blocked us but the response of Neil Custis to the above tweet from Stone was this:

‘Easiest job in the world to get a football club to knock down a colleagues story, shame people in our trade still fall for it.’

Mediawatch is pretty sure that Simon Stone and Duncan Wright are not ‘colleagues’ but that is a concept lost on Custis, who continues to ignore all the established rules of grammar and punctuation in his defence of the noble art of ‘scooping’.

‘while some work to get stories others just can’t wait to knock them down, believing that in itself is a story, pathetic’

Right. So by the big man’s logic, Stone or any of his colleagues could write that Pep Guardiola likes to smother himself in mustard and run around the park singing ‘I’m a special little sausage’ and Custis could not debunk that story because it would harm the special bond between noble brothers of the quill. Which is fine because he clearly is a special little sausage. Pep, not Neil.