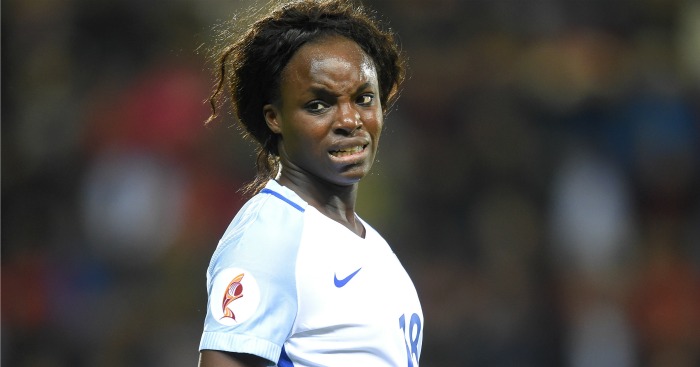 Sorry seems to be the hardest word
As you will no doubt have seen, an independent investigation concluded on Wednesday that Mark Sampson, the former England women’s team manager, had made racist comments towards Eni Aluko and Drew Spence. Aluko, who herself gave evidence in front of MPs, was finally proved right after months of having her name smeared by those whose responsibility it is to govern and guard our game. Those people should hang their heads in shame, and should lose their jobs. How can we trust you again

Yet they weren’t the only ones to smear Aluko’s name. In The Times, Matthew Syed added to his bulging collection of pseudo-hot takes by saying that Sampson had been hounded out of his job by a Twitter mob. For those of you who don’t remember, Mediawatch is happy to jog the memory with a few choice segments:

‘So, on the basis of what we have seen so far, this “scandal” is based upon two comments, one of which was judged not to have been made, and the other of which is rather innocuous.’

Correction: Both of those have now been judged to have been made, and something you considered to have been innocuous was deemed racist. It’s a strong start.

‘I don’t think the Ebola comment was inappropriate per se. Context is crucial, here.’

Sampson, a man in a position of authority, joked that Aluko’s family could bring Ebola with them to England. Not only did Syed not consider that racist, he didn’t even consider it inappropriate. That is the point when his platform for spreading this message should have been taken away. You don’t get to come back from lines such as those. You shouldn’t.

‘Perhaps the most troubling thing of all is that so many young people are among those who rush to be vicariously offended by remarks that have not been substantiated, still less contextualised.’

Still, Syed probably felt a little sheepish on Wednesday? Well, not by the look of his Twitter timeline:

Going to do Sampson in next #FredSavSyed. Will also do in next column. Urge everyone to read Newton report in full (will take 20 mins) 👍

‘Will I offer an apology to Aluko for my horrific coverage in a national newspaper? Find out by listening to my podcast and reading my column!’

Because the only way to make this shitty situation worse is for you to scrape the barrel even further by monetising your response, truly the actions of the lowest.

No doubt Syed will be perusing the report for that one line he feels justifies his piping wrong take, because that is far more important than Aluko getting justice and the FA committing to adequate reform? It really is all about him. Mediawatch is just tingling with anticipation at finding out which philosopher Syed quotes this time. Or do you use them all when doubling down on victim-shaming?

The only way Syed can continue to hold his head high among his peers is if he issues a total mea culpa for the whole shonky mess, not to his readers but to Aluko herself. If you’re expecting that rather than a mealy-mouthed, actually-on-this-point-I-was-right non-apology, you really haven’t been reading Syed for long enough.

A forthcoming apology wouldnt go unnoticed @matthewsyed. The comments that u trivialized were made owing to evidence you said didn't exist.

And it’s getting more and more absurd

David James proving that it wasn't just his judgement on the pitch that earned him the nickname Calamity. This man is a shambles. pic.twitter.com/fZKT3Q1X2n

You will notice that Mediawatch has not used the original tweet from former England goalkeeper David James here. Nor the one that labelled Aluko and Spence as ‘the noisy quarter’. That’s because he has deleted those tweets. Not apologised for them, just deleted. Watching James come rushing out and rashly misjudging the situation gave Mediawatch a pang of football nostalgia.

Now a tweet from a football personality might sound like a small thing in the context of FA incompetence/negligence and the culture against whistleblowing that exists within the context of this sporting clusterf**k but, actually, this stuff matters.

Tweets such as James’, sent to 150,000 followers and seen by many thousands more, help to shape a reputation. Many of those reading assume that James knows the mechanics of the case and, because they don’t, they use his opinion to help form their own. But James was wrong, and had been categorically proven so.

The way people like James can publicly state their opinions as facts, only to delete them and pretend they never happened, facilitates the message that victim-shaming is as important as a minor error of judgement; it isn’t. The reason victims of abuse don’t come forward is because of the snap verdicts made by those around them. People like James actively make the problem worse. Why bother speaking out? People will only think ill of me.

For all the investigation’s findings, Aluko will forever be known as ‘the whistleblower’. For all the conclusions made in her favour, she faces a never-ending fight to change public opinion because the words of James et al stick like shit to a wall and cause a similar stench.

The least she deserves is grovelling apologies from James and others. Mediawatch won’t be holding its breath, and we’d advise you against it too.

Rash decision
Were you under the impression that Manchester United and Benfica was a clash between two great clubs in the Champions League? Fools. What the Daily Mirror are here to tell you is that it was a contest to decide European football’s finest teenager and ‘Rashford settles it with bizarre goal as Benfica’s kid keeper takes floating free-kick over his own line’.

Or as John Cross writes in his opening paragraph to his match report: ‘IT was more blunder than wonder goal but showed why Marcus Rashford is the pick of his generation.’

This would have been bizarre even if Kylian Mbappe had not – that very night – become the highest-scoring teenager in Champions League history by scoring his eighth goal in the competition. That is the same Kylian Mbappe who has won the Ligue Un title and reached the semi-finals of the Champions League. He is 18 and he wants a word with whoever claims that Marcus Rashford is ‘the pick of his generation’.

That Cross then awards Rashford 6/10 for his efforts on the night is an unexpected Mediawatch bonus.

Apparently nothing…
The Sun’s Neil Custis is of course very keen to point out just how wonderful Manchester United’s defence has been this season, writing that ‘United’s is certainly a defence that gives nothing away no matter who is in it’.

Apart from that, they ‘give nothing away no matter who is in’ the defence. Are we all pretending that one of the world’s best goalkeepers did not save their arses on Saturday? Or just those of us in thrall to Jose Mourinho?

Pep talk
‘It would be easy to look at the narrow 2-1 victory over Napoli and attribute the difference in scorelines to the fact that the team at the top of Serie A are bound to be a tougher proposition in a Champions League group game than Stoke,’ writes Paul Wilson in The Guardian.

It would be both easy and correct, Paul.

But Wilson does not want to take the easy option and instead takes 1000 words to lecture a manager who has won six national league titles and two Champions League trophies about tactics.

Silly Pep does not realise that ‘a long ball over the press is not always a sign of a limited or unimaginative side; it is a legitimate tactic that can be effective against pressing teams who send players high up the pitch to win back possession. Play the right ball, ie not an aimless hoof downfield, and it is possible to leave any number of opponents stranded at the wrong end of the pitch’.

Wilson continues: ‘If he firmly believes that City must learn to play out from the back then fair enough – by the time they can do it they will be a force of nature at both ends of the pitch.’

A reminder: Manchester City won 2-1 against a team with a flawless record at the top of Serie A to make it nine points from nine in the Champions League.

As Wilson concludes: ‘No one would accuse Guardiola of being a long-ball merchant just on account of his defenders occasionally playing a clearing pass rather than a close one, and you would think a coach committed to winning rather than entertaining would be open to the idea. Most of the other managers in the Premier League cottoned on years ago.’

Measure by measure
Sun headline: ‘Real Madrid endure worst start at Bernabeu this millennium with 1-1 against Tottenham making it three draws and one defeat in seven matches.’

They haven’t half managed to make 17 years sound like an awful long time.

Nothing as it appears
‘Was this the moment Alexis Sanchez ignored his Arsenal manager ahead of training?’ asks MailOnline, who have seen a video of Arsene Wenger and Alexis Sanchez not shaking hands and have run with it more willingly than Jesse Lingard being given 12 minutes at the end of a Manchester United match.

Well, no, it’s not the moment Alexis Sanchez ignored his Arsenal manager in training; the clue that you have absolutely no idea what happened is in the words ‘appeared’ and ‘apparently’ in the opening three paragraphs.

Then five paragraphs in comes the pretty obvious explanation, as the Mail reports that cameras saw ‘Sanchez head on towards a group of his team-mates instead of approaching Wenger, though the Gunners manager did not offer his hand to his star striker and appeared to say ‘I’ve already done you”.

Nobody will be surprised to learn that the Mail have not amended their article, which still has a headline that reads ‘Alexis Sanchez appears to snub Arsene Wenger at Arsenal training as contract dispute rolls on’.

It appears to be absolute bullsh*t.

Jonathan Liew on the problems at Chelsea