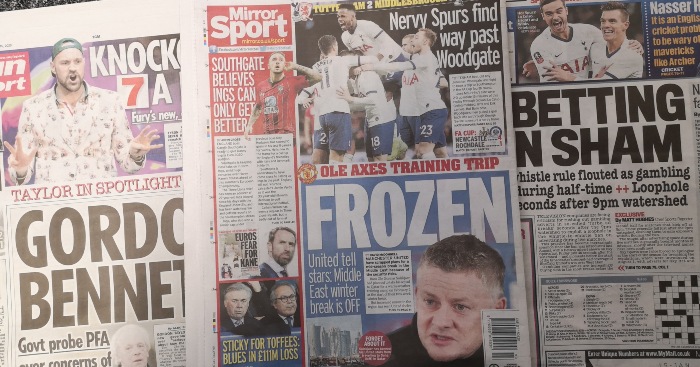 Killing me softly
Jurgen Klopp is a wonderful football manager but an incredibly naive man. He thought that by uttering these words when asked about Kylian Mbappe – “absolutely no chance, sorry for killing that story!” – he would give the impression that there was absolutely no chance and, you know, kill the story. Silly, silly Jurgen.

More than two months later, the story is still flying. Absolutely flying. Largely thanks to the Liverpool Echo, who are hoovering up all of the clicks for saying pretty much every single day – in a circuitous way – that the story absolutely is not true. Via the medium of click-bait.

Literally hundreds of words later, the article ends with these words: “Absolutely no chance, sorry for killing that story!”

Literally hundreds of words later, the article ends with these words: “Absolutely no chance, sorry for killing that story!”

Ever get the impression that somebody is taking the f***ing piss?

Big possibility
Obviously the URL for the Echo’s latest Mbappe piece (https://www.liverpoolecho.co.uk/sport/football/football-news/big-possibility-kylian-mbappe-move-17569071) is not misleading at all.

The ‘big possibility’ actually refers to these quotes from French football expert Julien Laurens when asked if Mbappe could leave this summer:

“It pains me to say it, but there’s a possibility, even a big possibility.”

“That’s his dream, to play for Real Madrid and play for Zinedine Zidane.”

Still, there’s definitely a ‘big possibility’ that something will happen.

Shoulda, woulda, coulda
Most football websites are in the business of making it seem like there could be a whole wealth of big-name deals yet to go through this January. This is the main headline on MailOnline on Wednesday morning:

‘Christian Eriksen to Inter Milan, Bruno Fernandes to Manchester United and Krzysztof Piatek to Tottenham… the January transfer window is halfway gone and here are 10 deals that could still go through before the deadline’

The very last line of the piece…on Moussa Dembele?

‘It would be difficult to get him out of the club in January, though, with president Jean-Michel Aulas refusing to let him go.’

Our only question is why they didn’t include Kylian Mbappe to Liverpool. It’s a ‘big possibility’ after all.

Former Blue member @AntonyCosta joins us on #TransferTalk at 12pm to discuss #THFC! 🔵

Talking of naive
‘JORDAN HENDERSON is the surprise choice as England men’s Player of the Year’ – The Sun.

It’s a public vote; the real surprise would be if a Liverpool player somehow didn’t win.

Brady bunch
Karren Brady appeared on Sky News, initially to talk about Philip Green, but then as part of a conversation which veered unflatteringly towards West Ham.

The footage is here:

…and if you heart doesn’t leap with joy when the interviewer asks why, despite their favourable ranking in the recent Deloitte report, West Ham have underperformed so badly (with a mischievous glint in his eye, no less), then you have no soul.

Also to be enjoyed:

– Brady claiming that the Premier League table does, in fact, lie.

– Spinning the decision to move to the Olympic Stadium as being an incontestably good move which is now serving the interests of the club’s community.

Will that be the community that you gleefully moved out of, Karren?

Hold the back page
You know when it’s a slow day for football news when The Sun pretends to be interested in PFA finances for their back-page lead and the Daily Mail are pontificating about betting adverts on TV. The Daily Mirror? They are in the business of pretending that Ole Gunnar Solskjaer said something interesting.

Did he? Or did he merely say that they were “looking at the Middle East” but will now train somewhere in southern Europe instead?

On a slow news day, you can do anything.

This lot are rubbish!
Darren Lewis gives short shrift to Tottenham in the inside pages of the Daily Mirror, writing that they were ‘aided by a defensive display that explained why Jonathan Woodgate’s side sit 16th in the Championship’.

Classic work from the national newspaper journalist who has never seen a visiting team in action.

They have lost one in eight in the Championship, Darren. And they were away to the actual Champions League runners-up.