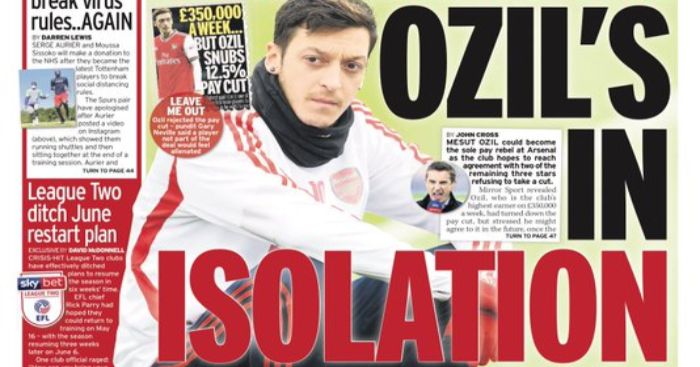 Whether or not you agree with Mesut Ozil is immaterial. But it’s safe to say Arsenal deserve no sympathy.

Rebel heart
Mediawatch cannot pretend to fully support Mesut Ozil’s decision not to take the same 12.5% pay cut as agreed with the majority of Arsenal’s playing and coaching staff. Not that that matters: it’s his money, his prerogative and his quite justifiable decision to see how his club – owned by a billionaire, no less – is actually financially impacted.

It’s an understandable stance and one neither the general public nor the wider media know the entire reasoning behind. Context is important but absent.

A player with a history of charitableness and benevolence should probably not be hung out to dry when all the information is not yet known. That is not the point of journalism. It’s very much the opposite.

So when the Daily Mirror lunge in two-footed on ‘ARSENAL’S CASH CHAOS’ in a back-page exclusive, questions have to be asked.

Why lead with a headline of ‘OZIL’S IN ISOLATION’ when John Cross’s story explicitly states ‘Arsenal players are accepting of Ozil’s stance which is that he does not want to rush into cuts when the PFA have advised to only accept deferrals’?

It sounds more like he’s being supported than ostracised.

Why point out that he ‘could become the sole pay rebel at Arsenal’ when he ‘has told his team mates that he is ready to accept a deferral’ and ‘could accept a bigger pay cut in the future’?

It sounds more like he’s waiting to see the full picture before rushing into a decision he’d be locked into for 12 months.

Why leave the two players who ‘Arsenal are hoping to reach agreement’ with unnamed when Ozil remains the only one of the three ‘rebels’ publicly shamed?

It sounds more like you’re only interested in engineering outrage when either you know the identity of the two other players and won’t reveal them or are more bothered about releasing half a story than finding out and sharing all the details.

As Cross himself wrote on Tuesday morning: ‘There are of course two sides to every story.’ Ozil’s has not yet really been heard. And it is indeed ‘his prerogative and his right and, after all, this was a voluntary cut via a contract amendment which the players can accept or otherwise’.

By Wednesday, he is front and centre again as some sort of social pariah. Is it too much to ask for a semblance of nuance before instigating a pile-on?

Deep cut
Martin Samuel is not about to miss an opportunity to properly lay into the ‘deluded’ German and his agent. Nope. ‘The damage seems done’ and they ‘cannot expect it to be forgotten easily, if at all’.

Not even if he takes a higher pay cut than anyone in the coming weeks or months? The whole thing would probably be ‘forgotten’ quite easily then, which is to say it wouldn’t generate nearly as many positive headlines as this has drawn negative.

It seems worth a reminder that Arsenal are the only Premier League club to actually agree pay cuts with players, and only three other sides have come to any sort of proposal over deferrals. Ozil is in the majority at the minute.

Except ‘players are a team, and should act like a team on and off the pitch’. Which is probably why the Arsenal squad is backing Ozil in his decision, and vice versa. No matter how much you suggest ‘there is plainly ill-feeling’ and an ‘added level of frustration at his behaviour’ within the team, it’s a choice his colleagues back.

The weird part of Samuel’s Daily Mail column is that Arsenal are framed somewhat as victims. ‘The worst that can be said of Arsenal’s actions towards Ozil is that they’ve been highly generous,’ he writes. A leak portraying Ozil as a traitor and a ‘rebel’ – the sort which can only have come from within the club – does not seem that generous.

But Ozil should be grateful. After all, Arsenal ‘made him the most expensive German footballer of all time in 2013’, then ‘made him one of the Premier League’s highest-paid players’ and ‘broke the bank’ to keep him with ‘a new, scarcely-deserved contract’. The least he could do is help out a club ‘so worried about their financial future’.

Poor Arsenal, forced into offering Ozil £350,000 a week two years ago in a panic fuelled by their own negligence.

Even if sympathy cannot be extended to the millionaire footballer being chastised for taking his time over a decision with immense implications, there is not a violin in the world small enough for the club with the billionaire owner that offered the apparently ridiculous contract in the first place.

Some people think I’m bonkers
Arsenal are, of course, due some good luck, so The Sun‘s own back-page exclusive comes as no surprise.

It seems that UEFA have been listening to Stan Collymore as they ‘have been urged to order associations to use Uefa coefficient scores to decide which teams play in respective competitions next term’.

‘Uefa President Aleksander Ceferin is understood not to be in favour…’

‘…that was one of the ideas booted round – and not off – the virtual boardroom table yesterday.’

At no point are we told who ‘urged’ anyone to do anything. But it is clear that this was ‘one of the ideas’ discussed at a general meeting as a potential option if seasons cannot be concluded, and something that is opposed by UEFA’s actual leader. So it’s pretty much decided.

Say ANYTHING
Elsewhere on The Sun’s website is this absolute doozy of a headline:

Random capitalisation TO denote anger at FOOTBALLERS earning money for NOTHING? Check.

The only problem? Those individual ‘£500k bonuses’ will only be paid if Arsenal win the Champions League in 2021, not if they just qualify. And it’s safe to say they won’t be able to do that ‘without doing ANYTHING’.

It’s all about you
‘Everton and Liverpool urged by PL rights holder to block £300m takeover of Newcastle’ – Liverpool Echo.

It’s obviously a website dedicated to only those two clubs. It’s just quite jarring to think beIN SPORTS have asked only Everton and Liverpool.

Is it that difficult to just put ‘Premier League clubs’? The cost in SEO is more than made up for by not pretending it’s just a couple of clubs that were ‘urged’ to do something.