Ozil rejected a pay cut because he wasn't sure how Arsenal would use the money. Let's keep blaming him. 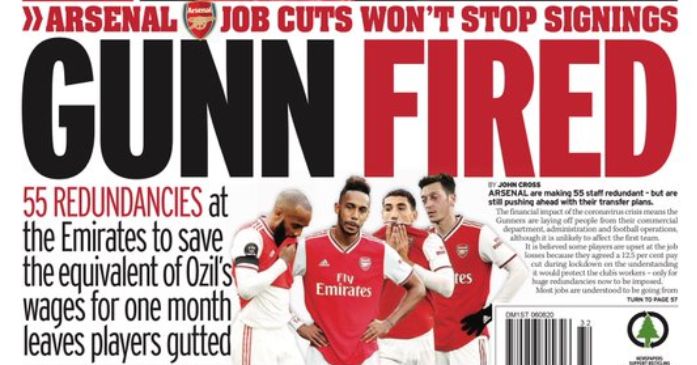 Mesut Ozil refused a pay cut as he asked to know how Arsenal would use the money. Fifty-five redundancies later, he is to blame.

Right old Mes
Mesut Ozil was predictably chastised and condemned for his decision not to join the majority of his Arsenal teammates in taking a pay cut in April. He was called ‘deluded’, branded a ‘rebel’ and essentially blamed for all of the world’s ills.

The other two players who chose not to take a pay cut were never named.

Ozil did not publicly explain his decision, not that he was obliged to, nor would it have even mattered: opinions had already long been established about how he had let the team, the sport and society itself down.

James Olley of ESPN offered some clarification, saying the German ‘wants assurances over the club’s future financial plans’ and that he would ‘be willing to take a higher pay cut’ if Arsenal clarified ‘how the money would be used and the future financial implications’.

He wanted to know the money saved would help the club and its staff rather than the billionaire owner only, basically.

Four months on, and despite widespread pay cuts throughout the club, Arsenal announced that 55 employees will be made redundant. Ozil did not make this decision. Kroenke Sports & Entertainment did.

So why is this the Daily Mirror‘s back page, with ‘the equivalent of Ozil’s wages for one month’ in an incendiary sub-headline designed to make footballers the enemy here?

And why do The Sun feel the need to use a picture of Ozil (‘still on £350k a week’) and Pierre-Emerick Aubameyang (‘set for huge rise’) as part of their back-page coverage?

Should they reject the terms offered to them and demand a much lower wage? Would you?

Try looking beyond the easy, lazy targets that footballers are and start pointing the finger of blame where it needs to be. This one is on the owner. Ozil, if anything, was right to doubt his motives.

On that note…
Read this.

How embarrassing it would have been to lose a meaningless game in a tie they had already won, having made nine changes to the team that started their last match nine days and numerous holidays ago. Imagine the ‘blushes’ had they only gone through by four goals instead of six.

Hand them enough Europa
Neil Custis wrote that match report, describing it as ‘all comfortably sorted before football was locked down’ and ‘the deadest of dead rubbers’.

Still, ‘blushes’ and all that.

Quite what would leave Manchester United embarrassed about being knocked out of the Europa League in any event is a mystery. After all:

‘While this competition is very much the poor relation, even of the League Cup, it does mean something.’

A reminder that winning the League Cup earns qualification to a competition that is apparently ‘very much the poor relation’ of it. And that Neil Custis is paid to pretend anyone would rather win that than the Europa League.

Get your Phil
Elsewhere on The Sun‘s website is this monstrosity:

Phil Jones has not been brilliant at Manchester United but this seems incredibly harsh. pic.twitter.com/6IKumfw4Qm

You’ve got to love that 3-3-4 formation, the choice of a free agent that cost Chelsea £8.3m in wages and the selection of Premier League, FA Cup and Europa League winner Phil Jones. Would Shkodran Mustafi or John Stones have been picked if Jones had won the League Cup instead?

One last time…
‘The £560,000-per-week nightmare is FINALLY over: Alexis Sanchez’s move to Inter Milan is confirmed on a three-year deal’ – MailOnline.

‘It has been reported that United have been paying a sizeable chunk of Sanchez’s £400,000-a-week salary…’ – a different story on the Daily Mirror website.

‘The Chile international has been on loan at Inter since August but United have been covering a significant portion of his £390,000-a-week wages’ – The Guardian.

Maybe now he’s gone someone can tell us how there can possibly be a £170,000-a-week discrepancy in the way Sanchez’s wages were always reported across different outlets?

Mediawatch scoffed as quotes about being “always tomorrow-based” were skewed to tease imminent transfer news at Anfield.

An apology is due. They are back on Thursday to deliver on that promise:

Fair play. That genuinely is ‘exciting’, a ‘development’ and was ‘tomorrow’. Sorry for ever doubting yo…oh that first paragraph is a climbdown.

‘Adama Traore is “easily” good enough to play for Liverpool or Manchester City, according to former Wolves and City star Joleon Lescott.’

And that, ladies and gentlemen, is the ‘Liverpool guarantee’ given to Traore. A day ago. By Joleon sodding Lescott.

The slug is even better: man-utd-sancho-transfer-agent-rio-ferdinand. That sounds official.

So what was the ‘old message’ that ‘hints’ about Sancho’s future?

They’ll do that. It’s how a transfer works.