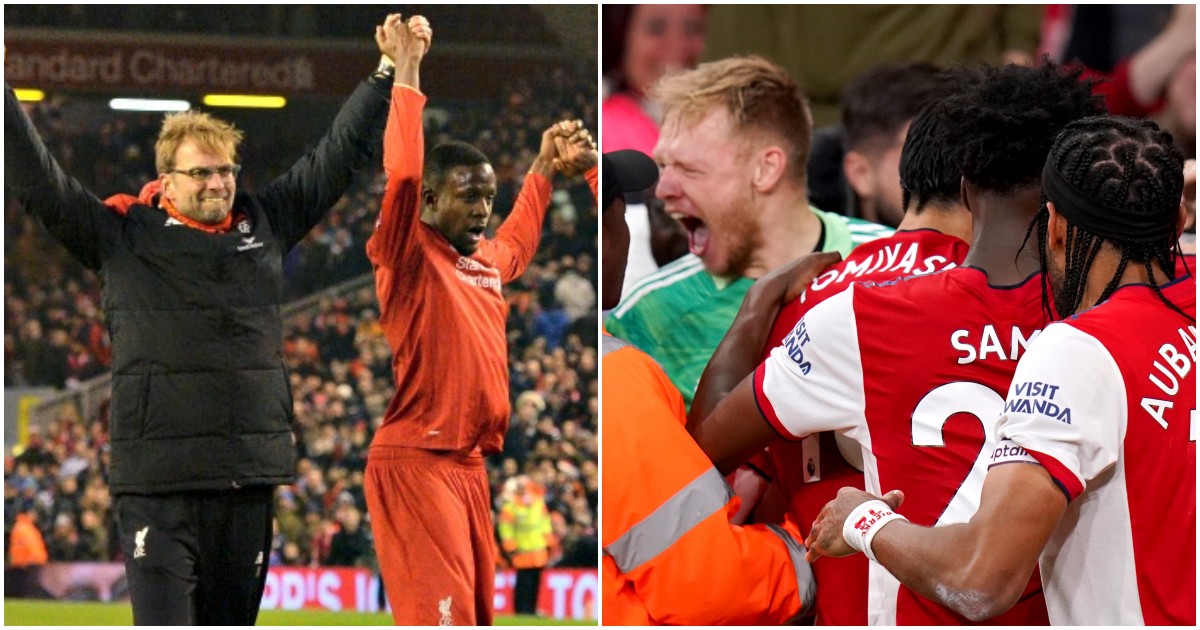 Silly Arsenal, celebrating a stoppage-time equaliser at home like no club ever has. And Newcastle need someone ‘calm’ so… Louis van Gaal?

Zone out
The Sun sustains itself on a diet of back-page sensationalism but saying Wembley was ‘turned into a war zone’ before the Euro 2020 final seems like a slight exaggeration that probably shouldn’t be a thing.

Perhaps Mediawatch should just be grateful that they didn’t fire up Photoshop and rifle through their folder of Second World War references for once.

Celebrate good times? Come on
Arsenal were in a battle of their own on Monday evening to emerge with a 2-2 draw against Crystal Palace. They scored an equaliser in stoppage time and quite foolishly decided to be quite happy about it.

John Cross takes them to task in the opening paragraph of his Daily Mirror match report:

‘They celebrated the injury-time equaliser as if it was a victory.’

Pathetic. Don’t they know you have to solemnly walk back to the centre circle with your heads down, ensuring to make eye contact with absolutely no-one in the desperation not to be seen as even vaguely happy? It’s the first thing we are told about football as kids: never show any positive emotion over last-minute equalisers in front of your home fans.

Honestly, imagine celebrating a stoppage-time 2-2 home draw against a team you are expected to beat, with Christian Benteke on the pitch. It is unprecedented nonsense and Arsenal should be banned.

Possession is nine tenths of the bore
Mark Irwin keeps up the withering angle on Arsenal in The Sun:

‘They thought they had turned the corner when they won three on the spin last month after a dreadful start to the campaign. But an unconvincing goalless draw at Brighton suggested that they are still far from the finished article.

‘And those suspicions were confirmed by a Palace team who dominated possession throughout and were far the more adventurous team.’

It definitely sounds like Alexandre Lacazette’s late equaliser was ‘an ill-deserved reprieve’.

Palace theatre
Keeping those stats in mind, it is strange to see Arsenal described as ‘shambolic’ in securing a draw they ‘barely deserved’ by John Cross of the Daily Mirror, with the Daily Mail‘s Sami Mokbel continuing that theme in writing about ‘a point that the Gunners barely deserved’.

Irwin says Palace were ‘cruising towards a win’ at 2-1 up before the stoppage-time equaliser, adding that this was proof that Arsenal are ‘going nowhere fast’.

It wasn’t a great performance or result but it all feels a little over the top when discussing an Arsenal team unbeaten in six games and four points off the Champions League qualification places. Palace have only lost to Chelsea and Liverpool in the Premier League this season. They’re quite good. They even celebrate late goals sometimes.

The Gaal of the man
Stan Collymore is back speaking his mind in the Daily Mirror, pitching for Louis van Gaal, Guus Hiddink or Ronald Koeman, some of ‘the grand names of European football’, to be appointed Newcastle manager as ‘a firm hand on the tiller for two years’.

Steve Bruce does not look like a terrible option by comparison.

Also, if ‘Newcastle need a manager who is the epitome of calm,’ serene, composed, tranquil sex masochist Van Gaal would not be the first candidate that comes to mind.

Frank god
Collymore also throws Roy Hodgson’s name into the ring because he is apparently a septuagenarian enthusiast.

He is kind enough to rule out a couple of possibilities in the form of Steven Gerrard and Frank Lampard. The former ‘is already at a huge club’ in Rangers. The latter would not be ‘right for a club in a serious state of upheaval’ as he would need a director of football and a ‘well established’ scouting network.

Villa holiday
Dean Smith does not get a look in. Collymore is busy ‘wondering if there are deficiencies in his approach’.

‘It would be no surprise if Villa’s owners are looking at West Ham, Everton, and Leeds and telling Smith they need to be better.’

It would be quite surprising if Villa’s owners looked at a team in 17th, four points below them and told Smith they need to be better.

Applause for effect
‘What Mohamed Salah did for Sadio Mane that left Garth Crooks applauding his TV in Liverpool rout’ – Liverpool Echo.

He set up one of his goals.

Dutch courage
‘Young Dutch football fan, 23, goes viral after he was caught carrying 48 PINTS of beer in one go during top-flight match in Holland’ – MailOnline.

Can one ever really be ‘caught’ carrying 48 pints? It’s not as if he thought he could do it covertly.