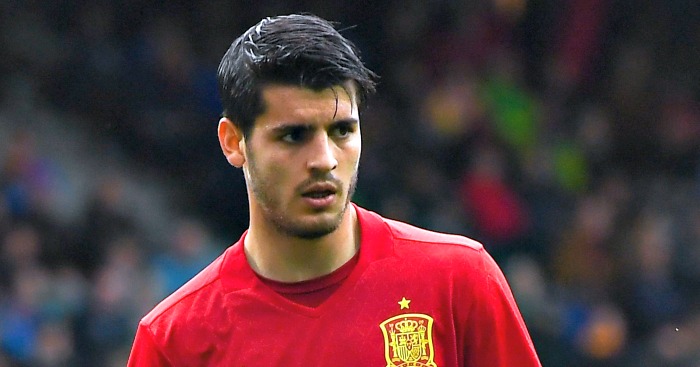 One-hundred-and-eighty (million)
Manchester United fans: How much do you think Alvaro Morata will cost to sign this summer?

Real Madrid are reported to value the striker at around £78m, while any fee from £60m upwards has been bandied about with regards to a United bid.

Forget all that, because Morata will cost £180m. Which is more than double the current world record. Neil Custis of The Sun exclusively says so. He writes:

‘Manchester United’s pursuit of Alvaro Morata could cost them a staggering £180million.

‘SunSport understands personal terms have been agreed wit the Real Madrid striker on a five-year contract worth around £350,000 a week.

‘Those wages for the Spain international would amount to just over £90m, with Real demanding £90m themselves as a transfer fee.’

Ah, so you’re combining his reported wages and the reported fee? So Paul Pogba, who earns £290,000 a week on a five-year contract at United, actually cost £164.7m, not £89.3m? And Zlatan Ibrahimovic was not a free transfer but a £19.1m signing last summer?

Quite why the British media is sometimes obsessed enough with wages to include them in actual transfer fees is beyond us. Why is it not being reported that Everton have signed Jordan Pickford for around £45m? How come Sead Kolasinac, earning a reported £150,000 at Arsenal, is described as a free transfer when he was actually a £39m signing?

Also, the claim that ‘Real are demanding £90m themselves as a transfer fee’ should not be ignored. The widely-reported line is that Real are actually asking for £78m, so Mediawatch had to wonder where that came from at first.

Then we remembered that £78m is roughly €90m. Custis must be confused.

It’s quite the eye-catching back-page splash from the Daily Mirror, who go big on their claim that Manchester United want Benfica forward Anderson Talisca for £15m.

The story in question even includes quotes from Talisca himself, who does indeed claim that Mourinho “loves” him. The quotes were first seen on Thursday morning, so quite how they become back-page news 24 hours later is anyone’s guess.

Even better is that the rest of the story itself is buried six pages into the newspaper, hidden in the top-left corner. The whole story is 139 words long, of which 73 words (52%) are quotes. The only mention of a fee for the ‘new Manchester United target’ is in the first paragraph, where David McDonnell states that Talisca is ‘£15million-rated’. By who, we will never know.

At what stage on Thursday evening do you think the Mirror realised they didn’t have a back page?

Give it Giggseh
Dominic King has a juicy Daily Mail back-page exclusive for us on Friday.

‘MAKE ME A SAINT’ screams the headline, with a sub-headline of ‘Giggs wants Southampton job to launch career as a boss’. Of course he bloody does.

‘Ryan Giggs is eager to kickstart his managerial career at Southampton as they begin the search to replace Claude Puel.

‘Sportsmail understands the Manchester United legend would relish the chance to take his first steps into full-time management on the south coast, given the club’s strong infrastructure.’

So Ryan Giggs, who brushed off links to Middlesbrough and Sunderland – Championship clubs – earlier this month because he is “in no rush” to begin his managerial career, is finally ready to ‘take his first steps’ into management? Mediawatch is stunned that he wants to take over a club in the Premier League. Stunned.

‘Southampton fans and prominent supporters, such as club legend Matt Le Tissier, have been educating outsiders about why Claude Puel, after finishing eighth in the Premier League, was sacked.

‘His brand of football was dull, they didn’t score enough goals, etc, etc.

‘Didn’t the board look at his brand of football before they employed him?

‘Why didn’t they haul him in and tell him the style they wanted was the kind that entertained everyone in that EFL Cup final against Manchester United?

First, Southampton did indeed finish eighth in the Premier League. What that disguises is that they were 15 points behind seventh-placed Everton, level on points with Bournemouth, and one ahead of West Brom and West Ham. The former won one league match after February; the latter were battling relegation until late in the season.

Southampton were closer to 18th-placed Hull in points (12) than they were to Everton (15).

Second, by ‘etc, etc’ Dunn presumably means ‘Puel fell out with the players who disagreed with his tactics and rotation policy’.

Third, Southampton were indeed exciting in the EFL Cup final (that they lost, so why would the board ‘haul him in’ and tell him to replicate that ‘style’?), but they ended the season with fewer Premier League goals than all but the bottom five. It might have ‘looked OK’ at Wembley, but it was far from ‘OK’ at most other English top-flight grounds.

As with Leicester and the sacking of Claudio Ranieri, this is perhaps another occasion on which ‘fans and prominent supporters’ should probably be trusted.

Dead Puel
Dunn is not the only one questioning the decision to part with Puel, although Neil Ashton of The Sun seems altogether more annoyed by it.

‘It is a wonder that director of football Les Reed reacts to players’ whims having reached an EFL Cup final and eighth in the Premier League,’ he writes.

‘Puel paid the price for being understated, a characteristic once regarded as classy in a sport sadly lacking in any kind of etiquette.’

No, Puel ‘paid the price’ for recording the club’s lowest points total since their first season back in the Premier League in 2012/13, and for finishing closer in terms of points to the relegation zone than European qualification. You might disagree with Southampton’s decision – many do – but you can at least see the logic.

Glad you guys have cleared that one up. pic.twitter.com/HtXaK8EyiW

Recommended reading of the day
Matt Dickinson on the video assistant referee (VAR).