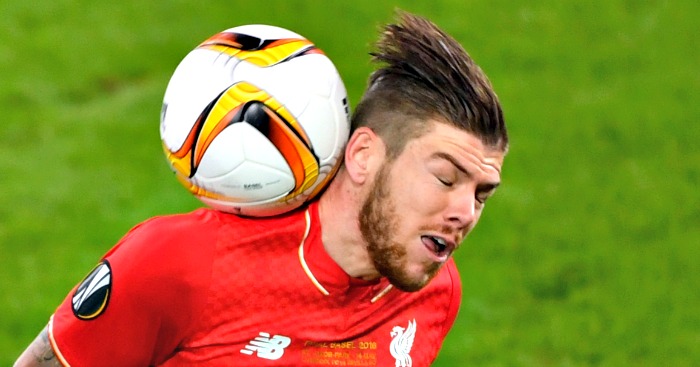 Mor-oh no
Liverpool lost 3-1 to Sevilla in the Europa League final on Wednesday evening, and the common consensus is that one man is more culpable than any other. Alberto Moreno is a name unspoken on the red half of Merseyside.

Appropriately, Thursday morning’s newspapers provide scathing reviews of the Spanish left back. The Daily Telegraph hand out a match rating of three out of ten – the lowest of any player on the pitch.

The Guardian give Moreno a four out of ten, the joint-lowest of any player, and Alan Smith writes: ‘Dismal. Yet again culpable in the build-up to a concession in this tournament. His meek attempt to halt Mariano – in the end being nutmegged – allowed the right-back into a prime position to pick out Gameiro for 1-1.’

Four out of ten is also the mark from Darren Witcoop of the Daily Star, who adds: ‘Suspect defending once again gifted his former side a route back into the game. The Spaniard is a weak link in the Liverpool back four.’

The Times rate Moreno the joint-lowest of any player with five out of ten. ‘Night to forget as he sold himself cheaply for the first Seville goal and continued to make errors after that,’ reads the summary.

Pete Jenson of the Daily Mail believes the 23-year-old ‘failed his big test as he cost Liverpool the opening goal and provided little cover all game’. Five out of ten – the lowest of any player – is the rating.

Leave it to The Sun to go against the grain. Neil Ashton makes one reference to the Spaniard in his match report – ‘Alberto Moreno did his old club a favour when he failed to get distance on a header before making a mess of his recovery’ – but inches to the left of his column are the DREAM TEAM RATINGS. Moreno is awarded a seven out of ten – the joint-highest of any Liverpool player.

(The use of) Those Opta stats have a lot to answer for.

Trophy life
Said Michael Owen on BT Sport last night: “A lot of finals, you either pick up the trophy or you don’t.”

Inception
Paul Ince is a football genius. This is a man who, while a Premier League manager in charge of Blackburn, once wrote ‘SHOOT’ in large capital letters on a notepad, with an arrow pointing to a crudely-drawn net. He knows things, things mere mortals cannot fathom.

Speaking to the Daily Express, he provides his reasons as to why Louis van Gaal deserves another season in charge of Manchester United. Ahead of an FA Cup final against Crystal Palace, what do you think the former midfielder’s argument will be based on?

“Go back to Fergie in 1990. If we hadn’t won the FA Cup he might not have kept his job. That was the rumour but we’ll never know,” says Ince. “I’ve been a manager myself and I don’t want United to get a reputation for sacking managers,” he adds, a point which seems apropos of nothing.

“But I say give him a chance to continue building something. He has been at some great clubs, won trophies at all of them, and you’ve got to respect his record.

“Remember, he’s been on a learning curve about English football and the club has been in transition. Hopefully he has learnt everything he needs to know now.”

Said ‘learning curve’ has taken the club from seventh when he took over as manager to fifth this season, via a fourth-placed finish last campaign, all with an expenditure of almost £250million.

As for ‘a club in transition’, peruse Van Gaal’s comments upon being installed as manager in summer 2014:

“We can be the champions still in England now, in my first year. Maybe you shall laugh, but also in my former clubs I have started like this, so for me it’s not big news or different, because I have already said that.”

Inception II
Ince is not done there. While he provides backing for Van Gaal, he identifies a few problem areas in the Dutchman’s squad. They include:

– “United have lost that aura…”

– “They need five or six new players and they have to play attacking football and score more goals.”

– “The defensive record looks good on paper but they always look like they will concede goals and David de Gea has saved them so many times.”

– “I look at United’s midfield and it looks flimsy to me.”

– “There are a lot of players who can pass the ball – maybe over-pass it at times – but I don’t see a lot of power in there.”

So, aside from the lack of an ‘aura’, the need for six new signings, the desire for attacking football, the problematic defence, the ‘flimsy’ midfield, the lack of ‘power’ and the desperation for more goals, United are absolutely fine. Thanks, Paul.

Alan Shearer’s having a party
What do you get when you combine Terry Venables quotes with a Paul Jiggins story in The Sun? Well, you get ‘VAK’.

And what is ‘VAK’? Why, ‘VAK’ is the latest answer to the ‘SAS’. Former England manager Venables believes Vardy and Kane can become the next Shearer and Sheringham for the Three Lions.

“Kane reminds me of Teddy in the way he’s craftily able to find space,” says Venables of the Kane and Sheringham comparisons. “And Teddy always seemed to find the inside of the post with his efforts, much line Kane does. Teddy knew he never had to burst the net, he could pass the ball into the goal. Kane is the same.”

Fair points, Terry. So, how is Vardy, a man with 29 Premier League goals at the age of 29, the same as Shearer, who had 139 by that stage of his career?

“As for Vardy, he is a goalscorer and while I would never burden him by saying he is as good as Shearer, they both take the same amount of pleasure from sticking the ball into the net.

“It is a quality you cannot coach. It’s a natural instinct. And Vardy, like Shearer, has shown he has it at all levels.”

Jamie Vardy: The next Alan Shearer. Because he likes to score goals.

Fly on the Wal
Neil Ashton is pondering the sharp career downturn suffered by Theo Walcott in his Thursday column for The Sun. ‘FALLCOTT’ reads the headline. He writes:

‘How can he possibly recover from another summer off and trust Hodgson again if he is recalled for the World Cup qualifiers in September?

‘He missed the cut because Newcastle’s Andros Townsend kept popping up on the Match of the Day highlights reel towards the end of the season.’

– How can he trust Hodgson again? Should that not be the other way around?

– ‘Kept popping up on the Match of the Day highlights reel’ is a rather disingenuous way of describing Townsend’s record of three goals and two assists in his final eight Premier League games for a relegated Newcastle. When compared with Walcott’s one goal in his last eight fixtures, the decision to call-up Townsend is entirely understandable.

Bloody Match of the Day. It’s all Lineker’s fault.

The story: That Neymar is signing a new six-year deal at Barcelona. For fu…

Fan mail
‘Manchester United chiefs fears they could miss out on Pierre-Emerick Aubameyang this summer due to the player’s reservations over Louis van Gaal,’ writes Sami Mokbel for the Daily Mail.

‘There are concerns within the Old Trafford hierarchy that the Dutchman’s much-maligned approach will prevent them from signing their top transfer targets.’

A question for the Mail: What has changed since Rob Draper informed us that United had ‘moved closer’ to Aubameyang’s signing earlier this month? Has he suddenly realised the football is a bit sh*t?

Top, top, top player
Mediawatch has a simple question for you: Who holds the following viewpoint?

‘I still think Terry has time left at the top as a player — if I was at Liverpool, Manchester United or Arsenal, I would have signed him on a two-year contract.’

If you answered Henry James Redknapp, writing in his column for the London Evening Standard, then have a shiny gold star. You deserve it, champ.

‘Is this 1976?’ headline of the day
‘Liverpool target keeper Loris Karius set to bring stunning model girlfriend Annelie Alpert with him to Anfield’ – The Sun.

‘Footballer moves with loved one’ is quite the hot take.

Henry Winter of the day
‘Klopp tried to rescue Liverpool, sending on Joe Allen for Lallana and then Christian Benteke for Kolo Toure. Liverpool’s fans tried to revive the side, singing ‘You’ll Never Walk Alone’ as they had at half-time in Istanbul but there was no chance of an Istanbasel.’

Recommended reading of the day
Rory Smith on the fabric of a football club.

Will Sharp on Bayer Neverkusen.