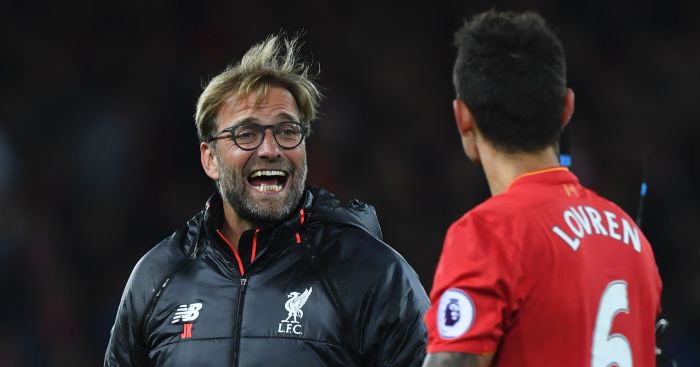 Dejan Lovren started 12 games in the Premier and Champions League last season. Liverpool kept two clean sheets in those matches; the Croatian was substituted in the 40th and 53rd minutes.

But it was definitely ‘an unbelievably bad decision’ to sell him. It was clearly ‘naive’ of Jurgen Klopp not to predict all of his Liverpool centre-halves would be injured at the same time. It is certainly worth Charlie Wyett bringing Lovren up in the first paragraph of his match report for The Sun, who describe Fabinho’s apparent muscle strain as a defensive ‘crisis’ for a club that has now conceded one goal – a penalty – in its last three games.

‘While Lovren was in Germany preparing for tonight’s Champions League trip to Dortmund, his former club were left in total disbelief as Fabinho pulled up with a hamstring injury within half hour,’ he writes.

‘The defender got plenty of stick in his six years on Merseyside and his ability did not match the remarkably high opinion he has of himself – but how Jurgen Klopp needs him now.’

Klopp will probably manage without a centre-half who has not kept a Premier League clean sheet against a team other than Bournemouth or Huddersfield – both of whom would go on to be relegated in the same season – since December 2018.

Hell, Lovren’s last Premier League start was against Watford in February and look how well that went. Wyett’s Sun colleague Dan King described him as ‘ever hapless’ and ‘part of a long line of flaky Liverpool defenders’ in his match report from that day.

What ‘an unbelievably bad decision’ it was for Liverpool to sell him.

Should Klopp have targeted a centre-half in the summer? Probably. Is it quite difficult to find a fourth-choice centre-half who will be happy not playing when everyone else is fit and available? Absolutely; that’s why Lovren left. Was Klopp supposed to know Virgil van Dijk and Fabinho would suffer injuries within ten days of each other while Joel Matip would remain sidelined? Hmm.

Pointing out that Liverpool needed to buy another defender is at least partially hindsight. Suggesting the sale of Lovren was ‘naive’ and in any way a mistake is b*llocks. The 31-year-old suffered four separate muscle injuries in his last two seasons at Anfield when he wasn’t even playing. Keeping him would definitely have been the solution to their current fitness problems.

Mo problems
Fabinho going off injured might not even be the biggest problem Liverpool face in the coming weeks. Let the Daily Mirror website shed some light.

‘Salah seen limping down the tunnel after Liverpool win over Midtjylland’

Klopp did not mention it whatsoever. No journalist asked about it in the press conference. It was not even discussed on BT Sport, from whom the footage was captured and spotted on social media by a couple of worried fans whose fears have been turned into delicious clicks.

Do the Mirror at least provide an update on the situation? No, unless ‘he will be desperate for it not to be serious’ qualifies. Which it does not.

Let your Guard down

Stan Collymore has long had something against Pep Guardiola. The Daily Mirror pundit…

– Wrote that ‘the cracks are beginning to show’ at Manchester City under Guardiola in October 2016, adding that ‘he’s not a genius like the late Brian Clough was’.

– Wrote that Guardiola ‘epitomises the modern manager – it’s about grand designs and plans rather than practicalities on the pitch’ in November 2016.

– Wrote 421 words about how he didn’t care that Guardiola seemed to ask who he was during a press conference in December 2016.

– Wrote, most famously of all in December 2016, that ‘if he thinks he’s going to turn up and outplay everybody in the Premier League, and that teams like Watford, Leicester, Bournemouth, Southampton and Crystal Palace are going to let his Manchester City side have the ball for 90 per cent of the time and pass pretty patterns around them so they can get a result, then he is absolutely deluded. In fact, he is beyond deluded. And if he thinks he doesn’t need to teach tackling or one-on-one combat in training then he’ll be going back to Spain with his tail between his legs.’

– Wrote that ‘there’s not one shred of evidence to suggest Guardiola deserves to be mentioned in the same breath as Conte in this league of ours’ in January 2017.

– Wrote that Guardiola was ‘the epitome of chequebook management’ in April 2017.

– Went strangely quiet from May 2017 to May 2019, save for blaming Manchester City’s dominance on everyone else being rubbish.

But now Guardiola is properly struggling again, Collymore is back aboard the bandwagon, writing that a Champions League win for City this season would ‘simply be par for the course’.

‘If he were to leave the Etihad on the back of it next summer then he still wouldn’t have done anything in England to convince me he is the greatest manager of all time, as some under-30s would try to have me believe.’

He will have only recorded two of the three highest Premier League points tallies ever, winning a further four domestic trophies in the process.

‘In a decade or two, I don’t think we’ll even look back on Guardiola as one of the top 10 managers in football history.’

Well that is purely subjective and down to personal opinion. But only three coaches have ever won more European Cups and he has eight domestic league titles across spells in three different countries. How strange to suggest he is ‘absolutely nowhere near’ the best manager ever.

But Collymore explains why: he has some quite ridiculous parameters for that meaningless moniker.

‘To be considered the best you have to have taken a sleeping giant that has been swamped by its rivals and turned them into a club which dominated domestically for nearly two decades and won two Champions Leagues, as Sir Alex Ferguson did at Manchester United.

‘Or taken a provincial club and players, and turned them into English champions and two-time European Cup winners, as Brian Clough did at Nottingham Forest.’

So you can only be the best manager ever in Collymore’s eyes if you are called Sir Alex Ferguson or Brian Clough. Righto.

To The Sun: Leipzig booking The Lowry Hotel is not ‘a huge blow’ for Manchester United. It is, at best, an incredibly minor inconvenience.

The only way is Up

It could even give Ole Gunnar Solskjaer a chance to corner Dayot Upamecano, if the Daily Mirror is to be believed.

‘Solskjaer opens up on Upamecano meeting as Man Utd track alternative’ is their headline.

Oh wow, that sounds genuinely interesting. No manager usually discusses an opposition player so soon before a game. How strange of Solskjaer to be so frank.

Except this ‘Upamecano meeting’ is literally a match between Leipzig and Manchester United, Solskjaer ‘opening up’ is him saying “I know he’s a very good player and we can see him close up tomorrow”, and the alternative being tracked is entirely unrelated.

‘Lampard suggests he is harshly judged for being young and English’

The headline is fine really. But the sentiment is hilarious.