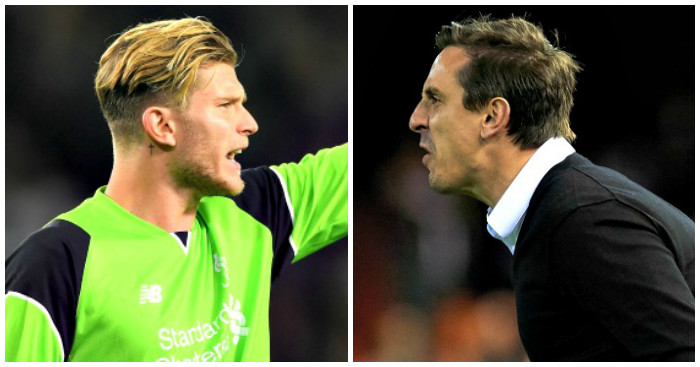 When pundits attack!
Gary Neville might not be impressed by the fact that everything he tweets becomes a news story, but even he can’t pretend to be surprised that ‘Neville and Carragher vs Karius and Klopp: Tag-team turmoil’ is big news. Like it or not, ‘famous person says thing about other famous person’ now accounts for a fair chunk of news.

Karius’ initial response came via an interview in the Daily Mail with Ian Ladyman, arranged before the Bournemouth defensive sh*tshow but carried out afterwards. On Tuesday, Ladyman writes another column in the Mail to a) defend the Liverpool goalkeeper, and b) try and smooth over any growing argument that he may have had half a hand in starting.

‘This is what he said: “I don’t care what Gary Neville said. He was a top player, then he was a manager for a short bit and now he is back to being an expert again. He is always very critical. I think he does it to everyone. I just hope that when I do well he will comment on that. We will see in the future.”

‘From a 50-minute interview, that part took up about 35 seconds. Karius was not animated or emotional. He just answered the question… Karius was just being a grown-up. He was just having a conversation with a tape recorder running.’

You catch Ladyman’s drift. It’s harsh of Neville and Carragher to react to Karius’ comments when they were a very small part of the interview (just 1.2%, by Ladyman’s maths) and were not intended to cause any antagonism.

However, Mediawatch can’t help thinking that Ladyman is left locking the stable door days after the horse has bolted. And he might want to have a word with his newspaper about why it took him so long to get hold of the keys.

‘Liverpool goalkeeper Loris Karius hits back at his critics as he admits: “I messed up but I don’t care what Gary Neville says… he is always very critical”’ read the Daily Mail headline on that original interview, placing the Neville quotes front and centre.

‘LORIS KARIUS EXCLUSIVE: ‘I messed up but I don’t care what Gary Neville says,’ was the tweet of that interview. So was ‘EXCLUSIVE: Read our interview with Liverpool’s under-fire keeper Loris Karius as he hits back at Gary Neville’. And so was ‘Liverpool keeper Loris Karius tells @Ian_Ladyman_DM that Gary Neville can keep his opinions to himself’, as tweeted by the Mail’s executive sports editor on that same day. ‘Keep your opinions to yourself’ sounds a little more serious than ‘not animated or emotional’ to us.

‘Gary Neville has responded to Loris Karius’ dig at his management record in Spain,’ the Mail Sport account tweeted when Neville responded to that interview. So it was a dig at Neville then, but not a week later when the story has blown up spectacularly?

Mediawatch agrees that this story has got blown out of proportion, sympathises with Ladyman on that point and thinks that everyone involved could probably do with a thicker skin from Santa Claus. But let’s not pretend that the Daily Mail wasn’t complicit, gleeful even, in stirring up the story.

The clangers
‘There’s a reason why goalkeepers are making so many clangers this season – defenders these days are RUBBISH’ is the headline to Stan Collymore’s latest offering for the Daily Mirror. That man sure does get a lot of airtime.

It’s a clever trick from Collymore, and one he’s used to: Give the explanation for a problem without bothering to prove whether there actually is a problem. In this case it’s ‘goalkeepers are making so many clangers this season’.

‘There’s a reason why goalkeepers are making so many clangers this season’. And that reason is that they’re not, but Stan Collymore can remember a few from the last couple of weeks.

Glory days
Sticking with Collymore, and let’s at least hear him out on the reason for a growing problem that is neither growing nor a problem.

‘Everyone is focusing on the mistakes goalkeepers are making this season and, yes, Loris Karius, Darren Randolph and Claudio Bravo have all dropped clangers. But a lot of the time they are making these ricks because they are being put under pressure by some really bad defending. Defenders these days are rubbish.’

Now Mediawatch will give Collymore the benefit of the doubt on Bravo, but we remember Karius’ mistake for Bournemouth’s winner and Randolph’s for Divock Origi’s equaliser. One was a simple cross dropped and the other a simple save from a long-range shot spilt. Can we really just blame defenders as a blanket excuse for these? Yes, apparently.

As ever with Collymore, the true answer is that things are rubbish now and were great back in his day.

‘Alan Shearer, Andrew Cole, myself, Les Ferdinand, Robbie Fowler, Dion Dublin, Peter Beardsley, Paul Rideout, Tony Yeboah, Ian Rush, Eric Cantona…. I reckon that, to a man, every one of us must be watching matches these days and wetting ourselves with laughter at the thoughts of what we’d do against David Luiz and John Stones.’

That’s the same David Luiz who has been brilliant in Chelsea’s run of two goals conceded in nine league games.

‘I wonder what someone like Mick Harford would have done if he’d come up against a midfielder who’d been dropped back into the heart of a defence, like a Javier Mascherano or Lucas Leiva.’

Of course. Ignore the fact that Lucas only plays as a central defender through necessity, ignore the fact that Javier Mascherano is a regular for Barcelona at centre-half, and ignore the fact that today’s defenders are quicker than those of yesteryear, because here comes Mick Harford. Mediawatch is prepared to guess one thing Harford would be doing in the modern game: Blowing out of his arse by half-time.

Keeping up with the Joneses
It’s not all bad for modern defenders, though. Collymore does have some kind words for one who can mix it physically with the best of them:

‘…defending has become so bad. There’s no physical contact now, so defenders don’t know how to deal with the rough stuff… The only player I can think of these days who I might have had had a bit of stick from is Phil Jones, because he looks as if he’d relish the physical challenge.’

It must have been a different Stan Collymore that wrote these words THREE DAYS AGO in the same newspaper, then:

‘Just like a big, fat turkey, Jose Mourinho’s Manchester United squad needs trimming in the days after Christmas. I’d look to ship out the players who don’t have a future at Old Trafford and bring in one, maybe two new signings who are ­brighter, hungrier, and who fit the United mould.

‘I’d ship out Phil Jones, Marcos Rojo, Bastian Schweinsteiger and Morgan Schneiderlin next month as well, if I could. I know a lot of United fans will say Jones has played better in recent weeks, but I just don’t think the lad is their standard. He certainly isn’t going to be part of the core group Mourinho builds his team around.’

The man who speaks his mind (and immediately changes it to suit).

‘Mourinho looks to have discovered his best side and formation, and the settled look to his team has coincided with a six-match unbeaten run.’

Including draws against Burnley, West Ham and Everton as evidence of progress is more than a little optimistic, but what of United’s ‘settled’ side and formation? Not only have United used two different formations in that run, they’ve started 18 different players and had five different line-ups.

Rough translation: Manchester United have started the same team twice in a row and won one of those games.

‘Something seems to get lost in derby games these days. Nottingham Forest did not compete in the second half against Derby and, against Birmingham a few weeks ago, Aston Villa didn’t either.

‘I blame the influx of foreign players, plus the fact that most of the lads who played would probably have been in academies from the age of 12, maybe even as young as eight. That means they’ve never been football fans.’

1) Did no team play badly in derby matches before the arrival of foreign players, with their laziness and refusal to try hard?

3) Why on earth is there an assumption that children enrolled in a football club’s academy can’t be fans? And why does that mean they can’t play well in derby games?

4) Finally, and we can’t say this loudly enough, if foreigners don’t get it and modern players brought through academy systems can’t be fans and so can’t play well in derby games, HOW THE SHUDDERING F**K DID THE DERBY AND BIRMINGHAM PLAYERS MANAGE?

Warning shot
On Monday, Mesut Ozil and Jerome Boateng had what can only be described as a lovely bit of banter about the Champions League draw on Twitter.

Their brief exchange is described by the media as a ‘warning’ (Metro), a ‘ding-dong’ (The Sun), squabble (also The Sun), a ‘fired warning shot’ (Daily Mirror) and ‘hitting back sarcastically’ (Daily Express).

A reminder to those that choose to ignore it: Boateng and Ozil are close friends. It’s none of those things you’re suggesting.

I could see Arsenal getting past Bayern Munich and, equally, I could see them getting beaten too. That's why cup draw are pretty dull imo

So Law thinks that either Arsenal will get past Bayern Munich or Bayern Munich will get past Arsenal, an assumption that is indeed pretty watertight. He then says that such even ties are the reason why cup draws are boring, while tweeting about a cup draw two minutes after he’d just tweeted about the Manchester City vs Monaco cup draw.

Be afraid. Be very afraid
Theo Walcott is a lovely boy and an occasionally lovely footballer, but he is about as scary as a duckling chirping for its mother. So when The Sun told us that Walcott ‘reckons it is the Germans who should be afraid’ after Arsenal drew Bayern Munich, we smelt a boring fish being dressed up to look interesting.

“They won’t want to play Arsenal. But I’m not going to lie when I say that it’s going to be a very difficult game.

“We won the group, we did what we were asked to do, and the one time we won the group we got Bayern! If we’d come second we could have got Barcelona. Obviously PSG got them. It’s the luck of the draw.

“We’ve just got to look at ourselves, think how we’ve improved this season compared to the seasons we’ve played against them recently. We lost 5-1 last year at their place and we can’t be doing stuff like that. But we’re a lot more resilient this year. I can’t really see that happening. We’re a lot more focused and dedicated. We’ll give them a good game, definitely.”

We’ll give them a good game and won’t lose 5-1 again. Mediawatch will be sleeping with the light on tonight.

Recommended reading of the day
Rory Smith on the treatment of Pep Guardiola.