Home Mediawatch Newcastle and their journalists backtrack; now it was always Howe 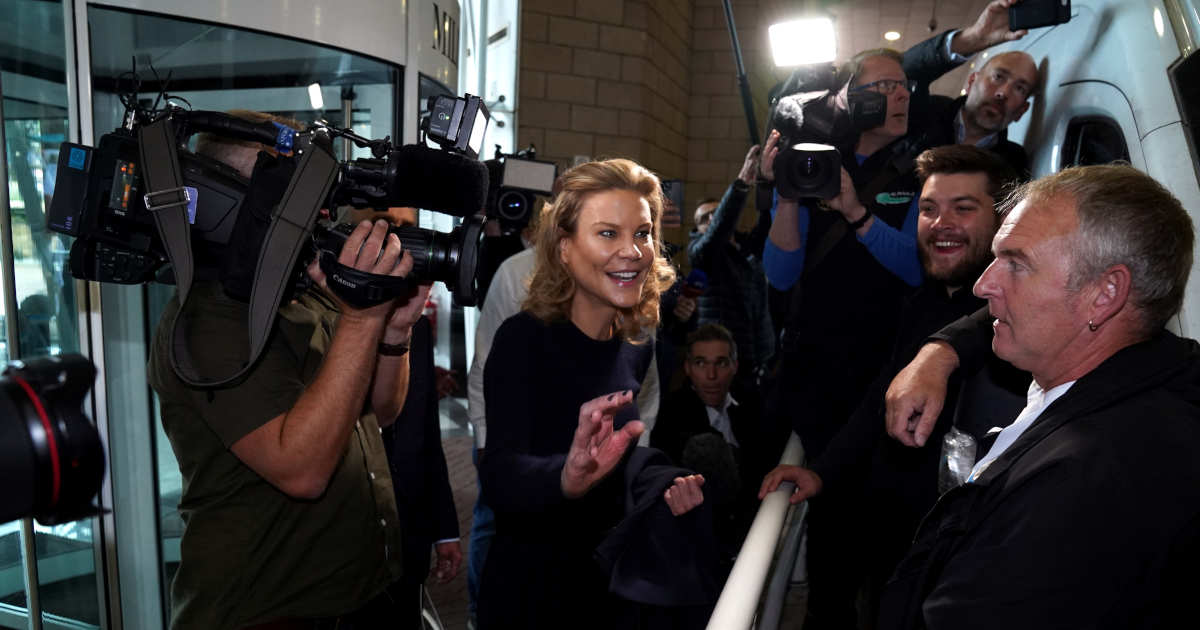 Newcastle United’s owners are spinning so hard that they’ve become a blur, and some people are still happy to backtrack on their behalf.

Hope sings eternal
Regular Mediawatch readers will probably remember the space we had to give to The Daily Mail’s Craig Hope and his absolute confidence that Unai Emery was to be appointed as the manager of Newcastle United before their trip to play Brighton at the weekend. It was only Wednesday, after all. So, what’s the craic on Tyneside on Thursday morning, now that Emery has told them where to go?

‘Newcastle United’s owners were left reeling yesterday after Unai Emery pulled out of a move to become their new manager, with Eddie Howe now back in the frame.’

Mediawatch knows that today’s newspapers are tomorrow’s chip-wrappers, but this really has aged like milk.

‘Howe, it is thought, interviewed well when the owners spoke to him, and his appointment would be welcomed by some of his former Bournemouth players in the dressing room.’

‘It is thought’? Craig, if you’ve got the inside track on Amanda Staveley or somebody else on the new board at Newcastle, we expect more certainty than that.

‘There was a concern given his last job saw the Cherries relegated from the Premier League two seasons ago, but he fits the bill in terms of his coaching credentials and communication skills.’

Mediawatch doesn’t have any doubts about Howe’s pedigree, but it’s very different to Emery’s, so is there going to be an explanation of how someone so very different to the man they wanted to hire now ‘fits the bill in terms of his coaching credentials’ beyond Newcastle having some former Bournemouth players in their current squad?  (Spoiler alert: no, no there is not).

‘Emery emerged as the clear preferred candidate over the weekend.’

We’re already aware of all this, Craig, primarily because it was being leaked so enthusiastically to people like yourself.

We’d humbly suggest that there might be a better way to describe these particular new owners than the ‘new regime’, considering everything that’s gone before.

‘But there is also a feeling that they must move on and that Emery has passed up a wonderful opportunity.’

We’re straying into ‘jilted lover’ territory, now. If Newcastle are unable to agree terms with Eddie Howe, should we be expecting Amanda Staveley to turn up outside Villarreal’s offices holding a boombox above her head?

‘A source close to the process said: ‘Amanda and Mehrdad could not have done more to satisfy Emery’s wishes”

Well, they could have not been leaking so enthusiastically that they annoyed Emery by disrupting his preparations for Villarreal’s Champions League match against Young Boys, for one thing. Also, glad to know you’re all on first-name terms. Nothing says ‘fearless independent journalism’ quite as much as ‘Amanda and Mehrdad’.

‘They made him a fantastic offer’

Trans: ‘We made him a fantastic offer.’

‘For him to then pull out was a surprise. In the end, he wasn’t for leaving.’

The president of Villarreal, Fernando Roig, issued a statement first thing the following morning, saying that ‘I have absolutely no idea [about any approach for Emery]’, so it looks from here as though the Newcastle board weren’t the only people who were surprised by the leaks spewing out from St James’ Park.

‘Reports in Spain yesterday said Emery had reservations about the structure of the club, with a new sporting director yet to be appointed. However, he knew all about plans to improve the structure during his interview.’

So, in other words, Emery had concerns over the club’s failure to hire a sporting director and knew that the club hasn’t yet brought one in, but Newcastle were still surprised when he wasn’t persuaded by a message that could easily be interpreted as, ‘Yeah, yeah, whatever, we’ll appoint one some time’? Call Mediawatch jaded, but we’re not as surprised by this as you seem to be.

We’re into the last couple of paragraphs before we get to the real meat of Emery’s decision.

‘He was also unsettled when news broke of his move in the hours before Villarreal’s Champions League tie with Young Boys. Sources in Spain say Emery had his head turned by the money and ambition at Newcastle, but that he then felt the warmth of Villarreal’s hierarchy and their fans amid talk of his exit. Those sources believe he has decided to stay in a comfortable environment, and that a lot of what has been claimed on his behalf has been excuses.’

‘Sources in Spain’, hmm? This is a strange turn of phrase to use, when almost everything that the ‘sources’ are saying was pretty much public knowledge by the time Newcastle had to backtrack on their previous confident statements, but ‘a lot of what has been claimed on his behalf has been excuses’ is telling for its lack of clarity. Which ‘excuses’ are we talking about, here? The ‘no structure and sporting director’ excuse? The ‘jumping in and announcing it before he’d even agreed’ excuse? Inquiring minds need to know.

‘Tuesday’s 2-0 win at home to Young Boys, putting the team on track to qualify for the last 16 of the Champions League, also contributed to his decision’

Oh, did it now? Well, Unai Emery has won the Europa League four times, so Mediawatch doubts that he considers that competition to be beneath him, and if Newcastle are seriously trying to claim that his concerns over lack of structure at their club would have vanished had Villarreal not won on Tuesday night…well, it all comes across as really, really desperate.

Perhaps it’s time for the new owners of the club to stop spinning and briefing, and to get on with the job of getting that structure in place. On the evidence of Thursday morning, it doesn’t seem very likely that this going to actually happen just yet.

The Sun engages in some critical thinking
A somewhat more critical view of the last couple of days at Newcastle can be found in The Sun, courtesy of Oscar Paul. Mediawatch will leave some of the choicest comments from him here, as a compare and contrast with the Mail’s reporting.

‘Newcastle’s search for a new manager might not be as shambolic as Spurs’ summer recruitment of Nuno Espirito Santo, but it’s getting there.’

‘It is almost as if the Toon’s mega-rich new Saudi-led owners have no idea how to run a football club.’

‘Having arrived at the club as white knights vowing to bring back the glory days, it is so far, so amateur.’

‘Whereas Emery was universally backed by Staveley, Saudi Arabia’s Public Investment Fund and the Reuben brothers, there are reservations about Howe.’

‘Right now, after having had the Emery-shaped carrot dangled, it looks set to be a lukewarm reception.’

‘Will Howe still fancy it now that it is clear he is not first choice?’

‘Now there is this protracted, fumbling process of finding a new manager’

Now, #dontbuythesun, obviously, but at least Paul is engaging with some critical thinking about how things are progressing at the club rather than just unquestioningly regurgitating The Thoughts of Chairperson Staveley as if they’re grand exclusives. It doesn’t seem very likely that Craig Hope will be engaging in this sort of difficult questioning for a while yet.

Reade all about it
In The Mirror, meanwhile, Brian Reade is ‘at the very heart of football’, and Brian also has comment to make on the owners of Newcastle United. ‘It would be easy to say the worst sight in football right now is new directors sitting in the directors’ box in spotless scarves that have just been lifted from the souvenir shop’, he says. Presumably there is some amount of accumulated filth on a scarf that he would find acceptable.

Also, ‘lifted’ from a ‘shop’, Brian? Mediawatch has heard that the Saudis have a punishment for that sort of behaviour.

Reade also seems to have a little space to fill in his column, because one little box contains this little exercise in stating the bleedin’ obvious:

‘One of the reasons it’s not straightforward for the Saudi owners to seduce a new manager with their billions is that Newcastle are six points off safety after 10 games for a reason.

‘The team is poor and there are deeper squads and sides with better Premier League survival records around them. Plus, there are no guarantees that the January transfer window will be a miracle cure.

‘Maybe that’s why Steve Bruce is enjoying the cricket in Dubai with a big smile on his face’.

Thank you for that insight, Brian.

Martin kicks off his column with this gem from, uh, the Web Summit International conference in Lisbon.

‘Talk about a strong spine at this week’s Web Summit International conference in Lisbon.

‘Arsenal Invincibles Sol Campbell, Gilberto Silva and Thierry Henry were all talking at the event in Portugal’s capital.

‘None of them were too keen to chat about Mikel Arteta’s team, though.’

Well, okay. Two quick things, here. Firstly, considering that Arsenal are near the top of the Premier League’s form table at the moment, this gag feels a little bit out of date. And secondly… what were you expecting there, Martin? That they’d line up to slate the current Arsenal team for the lulz?

Mediawatch would have been surprised had any of them joined in with dunking on Mikel Arteta’s team a few weeks after his team turned a corner and hit a purple patch of form.