Home Mediawatch Mediawatch: Newcastle fans have no reason to be concerned 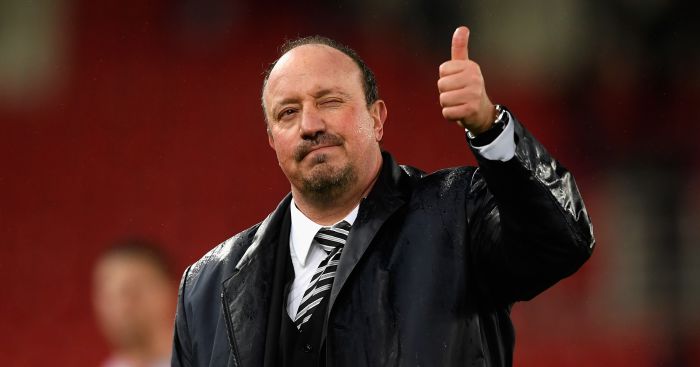 Dunn like a kipper
On Wednesday evening, Newcastle United manager Rafael Benitez gave a striking post-match interview in which he expressed his weariness, anger, frustration and just about every other negative emotion you can think of regarding the current situation at the club.

That situation has been well-documented for a number of years, but it’s worth stressing just how much this club is in civil war, and just how much owner Mike Ashley’s strangulation stymies every hope supporters have of meaningful progression.

Worth stressing because the Daily Mirror’s Andy Dunn, described by his paper as ‘Britain’s best Sports Writer’ has taken this opportunity to pour scorn not on Ashley and his behaviour, but on Benitez. The secret to all good comedy is in the timing.

The piece is almost so unbelievable that you have to read the whole thing, but contains some particularly choice lines:

‘The domestic season looms large, and everything changes but nothing changes. If you are anything other than a passionate Newcastle fan, the sound of Rafa Benitez complaining about transfer policy is a wonderfully reassuring clarion call. Like the school bell for playtime.

‘Rafa’s unhappy/on the brink/at end of tether/demanding action/at loggerheads with owner or anyone else in power… Yippee! That’s the sound of football kicking off again.’

Yes, more fool one of the most popular and able managers in Newcastle United’s history making the point that he was promised “every penny generated” and has not even been allowed to replace players sold. Benitez is operating at a transfer profit since he took over. Newcastle have achieved because of him and in spite of Ashley.

‘The Benitez strop is becoming a traditional curtain-raiser to rival the Community Shield.’

Is it? This is only the second season since 2009/10 that Benitez has even been in charge of a Premier League club, so that seems a little wide of the mark. He also declared himself perfectly happy with Newcastle’s transfer dealings before their Championship season. You know, when he was actually allowed to spend some of the money he’d made by selling players?

‘This year’s vintage came after he fielded a decent-looking team against Braga in a friendly, only to see them cuffed four-nothing.’

The ten Newcastle outfield players that started against Braga: Yedlin, Lascelles, Clark, Dummett, Ritchie, Hayden, Diame, Atsu, Perez, Gayle. Every one of those played for the club during their Championship season. If the team is ‘decent-looking’, it’s because Benitez has made them look like decent Premier League players.

‘If those players are actually bothered by what or what isn’t going on away from the football pitch, that is Rafa’s problem, no-one else’s.’

Well no it isn’t, and only a fool would believe that. If Benitez leaves Newcastle then this club could fall badly; look at their managers prior to him. So if players are angry about the owner’s broken promises, then that is everyone’s problem.

The piece goes on and on and on, and does make the odd reasonable point about wage bills and Benitez previously asking for more. But here’s the thing: this piece didn’t need writing now. There is no Newcastle supporter that will agree with it, and no sports writer with any in-depth knowledge of the situation at Newcastle that will agree with it. It doesn’t just misjudge the mood – it’s not even in the same postcode.

And so to the conclusion:

‘Rafa’s magic might get some improvement out of his well-paid squad, they have a crackerjack of an opener against Tottenham (who, erm, have spent nothing this summer), they have a great stadium, they have wonderful supporters. Oh, and it’s still sunny.’

Yes he might. But he might not. And he shouldn’t have to. And the stadium needs renovating. And the training ground needs upgrading. And those wonderful supporters are currently organising in their thousands to abandon this club if the manager goes.

But you’re right, it is sunny. Which is just about the most accurate thing in the entire piece.

But of all the lines, this is the line
‘Maybe Benitez wants Newcastle fans to be concerned. Because they don’t need to be concerned’ – Andy Dunn, Daily Mirror.

Sure. Everything is fine. Apart from the team, fans, stadium, manager’s happiness, academy and training ground.

So what are you worried about, Newcastle fans? After all, Andy Dunn knows your club more than you, so be patronised by a national sports writer telling you how to feel about something you love and spend your money on.

Opinions, or PR?
Mediawatch has no reason to think that Andy Dunn doesn’t fully believe what he is writing when telling Newcastle United fans that everything is fine, but there is the small matter of who he writes for at play here.

You see in 2015, the Daily Mirror became the first national newspaper to enter into a commercial agreement with a Premier League club to gain exclusive access.

Asked at a fans’ forum meeting why the club had chosen this path, managing director Lee Charnley said it helped Newcastle United “control and reinforce the positive messages the club wished to deliver”. You see the issue. It doesn’t take a huge leap to believe that “controlling and reinforcing positive messages” might lead to the club being defended against the manager speaking out.

Even if it doesn’t (and again there is no suggestion that Dunn is guilty of this), you can see why some Newcastle supporters might be a little suspicious. When these commercial deals are done, they come with inevitable consequences. Suspicion is one.

Delay repay
Towards the top of the Sun Football on Friday morning is a story about the new domestic season being delayed by a heatwave, which Mediawatch is happy to concede it had not factored into the equation. Largely because it’s 22 degrees, the season starts this evening and we’ve heard nothing about this until now.

‘THE 2018-19 football season is at risk of being POSTPONED… due to the extreme weather scorching the UK,’ the piece begins with no little hyperbole. Capital letters are strewn liberally across the place.

The photo on the piece is of Wembley Stadium, so this could actually be a big thing. Premier League and Football League games postponed due to the heat? Well, no.

‘Now the baking hot weather could mean some clubs postpone league matches to avoid the risk of serious injuries to players.

Right, so the chairman of a club in the Western Premier League reckons the heat could dry out pitches and make them dangerous, and that club had to move grounds for one of their friendlies a fortnight ago.

You’ll forgive Mediawatch for being slightly less concerned about that picture of Wembley than we were.

‘Is this definitely a football feature?’
Given that the Sun lives in 1973, perhaps it’s no surprise that they dedicate a full feature on their football homepage to the partner of a Premier League footballer. Not dressing it up as news, not snidely focusing on her while talking about him, just brazenly doing what they do: ‘Meet new Fulham signing Fabricio’s gorgeous Miss Spain missus, Adriana Reveron’. ‘Missus’. Bloody hell.

‘The 30-year-old cost last season’s playoff winners £5.4m from Turkish side Besiktas and is ready to go straight into the first team.

‘But while we’re eagerly anticipating his debut, it’s his missus that we hope to see just as much of at Craven Cottage.’

‘Reveron is a new Premier League Wag for this season.’

‘Here’s hoping she stays in England for a while. Welcome to the Premier League, Adriana.’

Welcome to the Premier League indeed. Where you can be letched at by sports writers of a national newspaper in the name of ‘cor, look at those’.

Someone is fibbing
“I spoke to Wilf yesterday and he certainly gave no indication that he wanted to leave, in fact, he was telling me how good the new signings were and how they’d help us” – Roy Hodgson, August 3.

But apart from that…
‘Arsenal transfer news: Barcelona star Ousmane Dembele can sign if two issues are overcome’ – Express Sport.

Those two teensy issues:
1) Barcelona not being prepared to sell.
2) Arsenal not being able to afford him.

Expect the deal to be done sharpish.

Mourinho smiling and being silent, apparently. Because that means he’s going to win the title. No, us neither.

Recommended reading of the day
Michael Cox on Pep Guardiola and Maurizio Sarri.

Miguel Delaney on a week of potential transfer chaos.