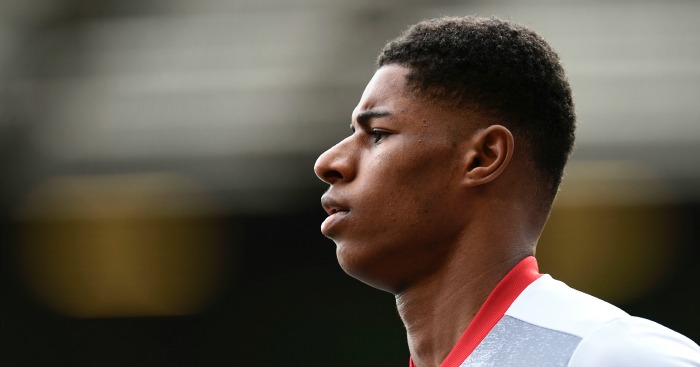 Bling me sunshine
Handily, it’s almost a year to the day since Neil Ashton of The Sun held up Marcus Rashford as a shining example of a footballer ‘with his feet firmly on the floor’. He was the ‘level-headed boy’ who ‘still spends time with his mates at the Trafford Centre in the afternoons or hangs out with them in Nando’s’.

In one corner was that wastrel Memphis Depay with his £300,000 Rolls Royce and in the other was Marcus Rashford with his ‘modest A3’. As we pointed out in an excellent Mediawatch at the time, ‘Rashford is 18 years old and earns £1,500 a week; Depay is 22 years old, is a Dutch international, was the Eredivisie top scorer last season and earns £80,000 a week. Unless you can tell us what car Depay drove in 2012, or see into the future and show us Rashford’s car from 2020, the comparison is moot.’

We said 2020 because we could not possibly have predicted that Ashton’s about-turn on Rashford would take only a year, presumably because at some point during that year it became apparent that the Manchester United striker was not going to be quite so useful to schmooze.

So here we are now in April 2017 and Ashton is taking up two pages of The Sun on Manchester United’s bling culture, specifically naming Rashford and his friend Jesse Lingard.

Mediawatch is particularly amused by the headline of ‘I’LL BLING THIS TO AN END’, with somebody (Jose Mourinho? Ashton himself?) labouring under the misguided notion that employers have any right at all to tell anybody how to spend their wages. We’re told that the Mourinho is ‘determined to do something about it’, but quite what that entails, we are not sure.

As the piece says – ‘The flashy motors in the parking bays and king-sized houses being built in the Cheshire countryside are all well and good when the goals are flying in’ – so presumably Mourinho would like to enforce a rule where players have two different sets of cars and houses depending on the team’s success. Because that would work.

So the ‘level-headed boy’ with his ‘humble motor’ is now a bling-obsessed monster, with Ashton writing:

‘His new home – a sprawling six-bedroom pad being built in Bowden, Cheshire – is almost ready for the forward to move into.’

And there really is nothing more bling than investing in property.

‘The £30,000-plus Rashford spends annually on car insurance for he fleet of motors that started arrived upon signing his latest deal, worth around £25,000 a week, barely touches the sides.’

Well, it wouldn’t, because it’s about 2% of his annual salary.

‘Last month he splashed out £14,500 on a Rolex Santos wristwatch for his mother Melanie’s birthday.’

Now this is the kind of sh*t that Mourinho really does need to bling to an end.

Now you might look at that back page of the Daily Mirror and think that somebody (‘Arsenal legends’, presumably) has called Arsene Wenger ‘arrogant’. That’s clearly what they want you to think.

Except, well, they didn’t, did they? What actually happened was that Paul Merson and Alan Smith spoke at an event to publicise Sky Sports and they were asked about Arsenal. Obviously.

Smith – as ever – was careful and considered and merely echoed everybody else in football as he said that Wenger had “almost become institutionalised” and that it was probably time for a change.

Merson – as ever – was not quite so careful or considered and said that the malaise at Arsenal ‘sickened’ him. He also said some nonsense about footballers needing to physically fight each other and declared it a ‘fact’ that Alexis Sanchez will join Chelsea this summer (it’s important to note at this point that Merson is a Chelsea fan).

What he didn’t say was that Wenger was ‘arrogant’. Here’s what he actually said, when talking about Arsenal being overtaken by Tottenham…

“There is an arrogance about Arsenal over how this could happen. You’ve got eight players out of contract and the two best players by a million miles, Alexis Sanchez and Mesut Ozil, could soon be out of contract.”

We are often told that Arsene Wenger IS Arsenal, but it really isn’t actually true. Unless you’re really desperate for a back page.

Contract talks
Paul Merson rather blithely says that Arsenal have “eight players out of contract” as an indication of their arrogance. But they actually only have two: Santi Cazorla and Yaya Sanogo.

This is England
Oh Stanley Victor. Not only does the man who predicted as late as New Year’s Eve that Chelsea would lose the title to Manchester City now say that Chelsea’s title was inevitable because Antonio Conte prioritised defending, but he also credits English football for this mentality. Because that’s the only way a foreign can succeed, of course.

‘Whatever they say publicly, Guardiola and Klopp will have learned they can’t just come to the Premier League and blow teams away with high-pressing attacking football and forget how important defending is.

‘Conte looked at things and said, ‘I’m going to pay passive respect to how the English play.’

This is the manager who won the Serie A title in three successive seasons, conceding 20, 24 and 23 goals. But yes, he tightened the Chelsea defence out of respect for English football.

Paul Merson, April 3, Daily Telegraph: Describes Burnley as ‘the team at the moment that are on a glass slope with a pair of Moccasins on, and it’s hard to stop’.

Either that defeat to Tottenham really shook him. Or he is an imbecile.

Know your friends
Anybody who thinks that David Moyes was simply engaging in ‘banter’ when he threatened to slap a BBC reporter, should keep one thing in mind – you are agreeing with this man:

Sick to death of PC. David Moyes condemded for what was friendly banter best not to speak to women anymore in case u say sexist things

Dun for
Oh and if being in the same gang as Jim Davidson does not make you realise that ‘banter’ is the defence of the bigot, read this from RTE man Eamon Dunphy:

“I think that was a bit of banter. I think there was humour, not anger in his voice.

“That thing about giving a woman a slap is kind of Glasgow street slang really. If it was said in a formal setting in a press conference or in any formal way, I think it would be far more serious.”

What’s the Glasgow street slang for ‘what a load of bollocks’?

Takes one to know one
Still, it is good to see most outlets speaking sense on the issue, and the Daily Mirror certainly got their best person on the job:

Criticism of Moyes is not the PC brigade gone mad – sexism is rife in football and this is the latest example @R_o_M https://t.co/aOjClAWIRu pic.twitter.com/t0uWZmebkb

After all, he would know:

Cameroon goalie is 27-years-old and studied Law. She started playing football 4 years ago. Shows just how far behind the women's game is.