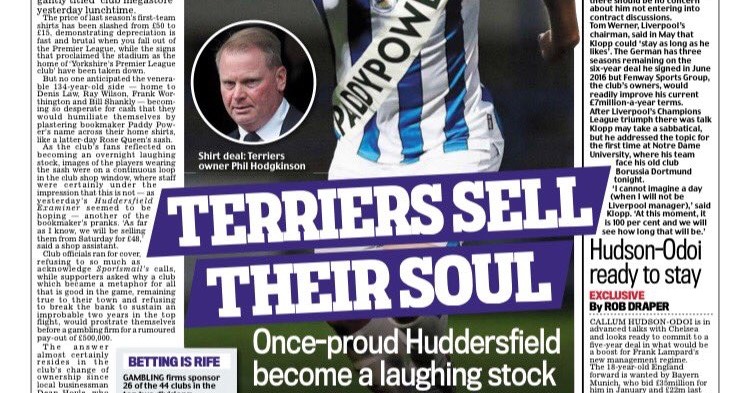 Compete Herbert
Where could we possibly start except with the Daily Mail’s Ian Herbert, who has previously featured in Mediawatch for asking whether the US women’s team was ‘too arrogant’, suggesting that alleged racism from Peter Beardsley might have been a ‘deeply misguided reaction’ to ‘cosseted kids’ and for writing over 700 words wondering why so many footballers have double-barrelled names.

But his latest piece – full of righteous indignation about Paddy Power’s sponsorship of Huddersfield Town – has taken a whole barrel-load of biscuits.

From the sublime to the ridiculous. Analysis of Huddersfield Town’s tie-up with a joke bookmaker. https://t.co/5l1AUjAMey @htafc #htafc pic.twitter.com/TjL6aarqH1

The shirt is part of @paddypower‘s new #SaveOurShirt campaign; an initiative that is backing a move towards unbranded football kits, effectively returning the shirt back to the fans.

…were separated by barely an hour. No sooner had Huddersfield ‘sold their soul’ than they had re-gained it again. They had ‘become a laughing stock’ and then almost immediately become the toast of football as they unveiled a shirt free of any sponsor.

Herbert might curse the timing but really, how did he not see this coming? Everybody with half an ounce of nous knew that this was banter, a prank, and yet he strode in po-faced, apparently oblivious to the fact that he could himself become a laughing stock if he got it all wrong.

How did anybody see those ludicrous Huddersfield shirts with the Paddy Power sash and not wonder when the punchline was coming? This kind of #banter may not be to anyone’s tastes, but those of us not in Paddy Power’s core audience should just ignore the whole farrago. Not make yourself look like an absolute div by taking it all so very, very seriously.

Wandering around a club shop in Huddersfield on a Thursday lunchtime, looking for reasons to be enraged, is presumably not why the Daily Mail poached Herbert from The Independent.

‘It was a significant commentary on the controversy engulfing Huddersfield Town that not a single customer was to be found in their extravagantly titled ‘club megastore’ on Thursday lunchtime.’

It’s Thursday lunchtime in July. The famous new home shirt is not yet on sale (SPOILER: Because it’s not the new home shirt) and the ‘club megastore’ is to be found at the club’s out-of-town stadium. Who exactly did you think would be hanging around the stadium on a work day (for most)?

‘The price of last season’s first-team shirts has been slashed from £50 to £15, demonstrating depreciation is fast and brutal when you fall out of the Premier League, while the signs that proclaimed the stadium as the home of ‘Yorkshire’s Premier League club’ have been taken down.

‘But no one anticipated the venerable 111-year-old side — home to Denis Law, Ray Wilson, Frank Worthington and Bill Shankly — becoming so desperate for cash that they would humiliate themselves by plastering bookmaker Paddy Power’s name across their home shirts, like a latter-day Rose Queen’s sash.’

Nobody ‘anticipated’ this because IT IS NOT TRUE. They were never going to wear that shirt in any meaningful game. Everybody knew this except you, Herbert.

‘As the club’s fans reflected on becoming an overnight laughing stock, images of the players wearing the sash were on a continuous loop in the club shop window, where staff were certainly under the impression that this is not — as Thursday’s Huddersfield Examiner seemed to be hoping — another of the bookmaker’s pranks. ‘As far as I know, we will be selling them from Saturday for £48,’ said a shop assistant.’

Because of course the details of any good wheeze/marketing stunt would definitely be shared with the lowly paid shopping assistants in the Huddersfield Town shop. For f***’s sake, fella.

‘Club officials ran for cover, refusing to so much as acknowledge Sportsmail’s calls, while supporters asked why a club which became a metaphor for all that is good in the game, remaining true to their town and refusing to break the bank to sustain an improbable two years in the top flight, would prostrate themselves before a gambling firm for a rumoured pay-out of £500,000.’

Some might have done. Briefly. Before they realised that for £500,000 they earned two days of publicity and a season of a sponsor-free shirt that is likely to sell faster than any other in their history.

Herbert lays all the blame at the feet of new owner Phil Hodgkinson.

‘His willingness to deliver Paddy Power another cheap stunt comes as football lures increasing numbers to gambling. A whistle-to-whistle TV advertising ban comes into play next season, but there will be gambling ads on the shirts of 60 per cent of Premier League and Championship teams.’

But not on the shirts of Huddersfield Town, which you would have discovered if you had hung on for a few days to see if the sashed shirt did indeed appear in the ‘club megastore’ on Saturday as promised. This whole marketing stunt may be cynical as hell, but the end result is less gambling sponsorship on shirts next season.

‘You don’t need to travel beyond Huddersfield to see how the industry draws people in. A stone’s throw from the statue of Harold Wilson, the town’s most famous son, Ladbrokes, Coral and Betfred stores stand a few hundred yards apart. Punters, some barely 20 years old, stare vacantly into the ’20p roulette’ machines and are invited to bet on Europa League ties Rangers v St Joseph’s and Kilmarnock v Connah’s Quay.’

Yep, that is definitely because they have seen that shirt. Those bookmakers were literally empty last week.

‘Amid suggestions on Thursday night that there are ‘more twists and turns to come’, Paddy Power will feel another successful stunt has been accomplished.

‘Huddersfield, who have just published a values charter placing honesty and integrity at their core, are left with only embarrassment and a whiff of incompetence.’

Or – and that is a really massive or – they have been left with a really brilliant shirt.

Said and Dunn
There is enough going wrong at Manchester United without making out that they are responsible for Harry Maguire potentially costing more than Matthijs de Ligt. Yes, we are looking at you Andy Dunn, ‘Britain’s best sports writer’ (according to the Daily Mirror, who have a horse (this horse) in the race.

‘Call it the Woodward Tax, the Ed Premium, or whatever.

‘The fact is that for six years of mis-steps in the Old Trafford boardroom, Manchester United will now have to pay extortionate amounts for talent.’

Yes, they will. They have paid an initial £45m for uncapped full-back Aaron Wan-Bissaka and they are being quoted a similar amount for Sean Longstaff. Those prices are indeed extortionate.

‘Leicester know United are desperate for a decent centre-half and want £80million, minimum, for Harry Maguire .

‘Good guy, good player. But £80m is, even by today’s ridiculous benchmarks and allowing for the surcharge on English players, an extortionate amount.’

Yes, but that is absolutely not about Manchester United, as proved by the fact that Maguire’s price would be exactly the same for Manchester City, who have not made ‘mis-steps’ in their boardroom. Were Leicester prepared to sell to City for £60m but asking for £80m from United, we could point the finger at Ed Woodward for his ineptitude. For that really would be laughable ineptitude.

Instead, what we are seeing from Leicester – and from Palace and from Newcastle – is that these clubs do not have to sell their players, so they are perfectly within their rights to ask for huge amounts of money. See Palace’s valuation of Arsenal target Wilfried Zaha for further proof.

But no, Liverpool man Dunn is ploughing on…

‘They just know that United – because of their recruitment ineptitude in both managerial and playing spheres since Sir Alex Ferguson retired – have to pay fortunes over the odds.

‘Under the stewardship of executive vice-chairman Ed Woodward, United have got themselves into a situation where they can pretty much be held to ransom.

‘Hence the £500,000 a week for Alexis Sanchez, for example. Hence why Leicester, with significant financial backing of their own, cannot be bullied into selling at a realistic price.’

But they cannot be bulled by Manchester City, either. Because of that ‘significant financial backing’. This is not a Manchester United story – and it is incredibly lazy to paint it as such – but a story about football finances in the Premier League.

‘They know that United, without a director of football and without any discernible footballing strategy from Woodward for the last six seasons, are pretty desperate.

‘That is why there is a Woodward tax.’

If there is a Woodward tax than there is also a Txiki tax and an Edwards tax, because no English club can sign Maguire for less than he is worth to Leicester. It really is that simple.

‘That is why United are going to have to pay £375,000 a week for David de Gea to sign a new deal – the same David de Gea who spent a good part of the second half of last season inventing new ways to concede a goal.

‘That is why Paul Pogba is posturing about a new challenge and why his agent’s stirring will probably end up being rewarded with a new Sanchez-style deal.’

Now that is the Woodward tax. And is an entirely different issue to Harry Maguire’s price. But the two are absolutely not connected, however much you want to drag out another anti-Manchester United piece in a quiet July.

Seriously, they are making enough of a cock of this whole football lark without blaming them for the whole concept of spiralling transfer fees in the Premier League.

Cherry on top
‘Why Bournemouth’s pre-season could see them start the new Premier League with a bang’ sounds like something interesting.

What, we ask the Daily Mirror website, has Eddie Howe stumbled upon?

Warm-weather training, apparently. Bournemouth have decamped to the La Manga Resort – which is, admittedly, lovely in a 1990s nostalgia kind of way – and have shunned the opportunity to whore themselves around the world like almost every other Premier League side (who got invited to do so).

Fair play to Matt Lawless, it’s a strikingly odd feature, which reads a little like a competition entry to win a free holiday.

‘Blessed with 300 days of sunshine a year, the five-star resort is rich in quality and steeped in history when it comes to the sporting legends it has hosted.

‘And a who’s who list of celebrities have graced the guest book over the years. Matt Damon, Robbie Williams, Sir Tom Jones and David Beckham, to rattle off a few.

‘That’s before you get into the exclusive list of residents who live there. Former Scotland boss Gordon Strachan, Formula One legend Nigel Mansell and a ‘King’ in Liverpool hero Kenny Dalglish, who all own villas on the magnificent resort.’

It sounds lovely. But have a Google, Matt: ‘English football team spends summer in La Manga’ might not be the headline you think it is.

‘Instead of fulfilling sponsor obligations to host a shirt-signing session, for example, Howe’s side were free to travel from their five-star hotel base by bike to their daily training ground without any fuss.’

We’re going to facetiously follow through with that logic. You know where’s really nice, very close to the sea and extremely convenient?

Football story of the day

Hi @jacklang your pseudonym is pathetic. As is the headline and the story pic.twitter.com/DsAMw637XS

Yes, that is literally ‘old man does shopping’.