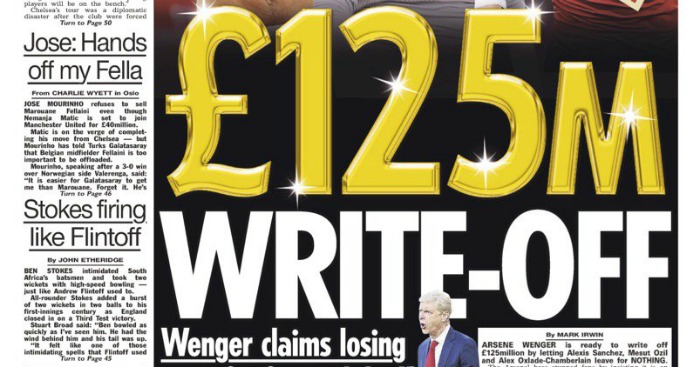 Fifty ways to leave your lover
Mediawatch agrees that Arsene Wenger’s claim that having the likes of Alexis Sanchez, Mesut Ozil and Alex Oxlade-Chamberlain going into the final year of their contracts is an “ideal situation” is a touch absurd, but we would use the same words to describe The Sun’s back-page claim that Arsenal are happy to ‘write off £125million’. Are we talking about the same Alexis Sanchez, Mesut Ozil and Alex Oxlade-Chamberlain here?

Mark Irwin writes: ‘They could get £50m for both Sanchez and Ozil and £25m for the Ox this summer.’

Well no, they really really couldn’t.

There is no club in Europe that would pay £50m for Mesut Ozil, who has just one year left on his contract. To put that claim into perspective, only 19 players have ever been transferred for £50m or more, and none of those players were in the final year of their contract. But still, £125m sounds like loads, doesn’t it? And doesn’t it make Arsenal look really, really silly?

Presumably Mark Irwin did not read colleague Mike McGrath’s story from ten days ago that claimed:

‘ARSENAL have made a massive breakthrough in Mesut Ozil’s contract talks.

‘The Gunners are increasingly confident a new £280,000-a-week deal will be struck to keep the German at the Emirates.’

Just Seventeen
You know what else is a big number? 17, that’s what. And that is the number of players Antonio Conte has ‘let go’ this year. Struggling to think of 17? Us too.

‘NO wonder Chelsea are short of players…Conte has let 17 go’ is the headline in the Daily Mail.

Which is odd because we thought Chelsea had sold six players (Nathan Ake, Juan Cuadrado, Asmir Begovic, Bertrand Traore, Christian Atsu and Nathaniel Chalobah) who had made a grand total of four Premier League starts last season, which does not sound like an awful lot. Add in John Terry and his six starts and we get a round ten Premier League starts culled from the Chelsea squad. It doesn’t sound like Antonio Conte has let go 17, subsequently leaving Chelsea short of players.

Thankfully, the Mail tell us exactly who these 17 players are whose exits have left Chelsea on their knees. Here we go:

2. Oscar. Small-arsed player sold in January and Chelsea went on to win the Premier League. Starts: 5.

4. Nathan Ake. Spent much of last season on loan at Bournemouth. Starts: 1.

9. Nemanja Matic. Not gone yet but a key part of title-winning squad. Starts: 30.

17. Diego Costa. Not gone yet but a key part of title-winning squad. Starts: 35.

So the only Chelsea footballers likely to exit this summer who played any real part in Chelsea’s title triumph are Costa and Matic, who have already been replaced by Alvaro Morata and Tiemoue Bakayoko. Bit-part players Begovic and Terry have also been replaced by Willy Cabellero and Antonio Rudiger. Which all sounds fair enough.

Or, as Matt Barlow of the Daily Mail puts it: ‘How on earth have the Premier League champions got into this pickle with the season just days from starting?’

Yes, how have they found themselves in this ridiculous situation where they have just 22 players listed in their first-team squad? And only another 16 still at the club who have returned from loan. With the start of the season just (12) days away, and with only 38 players on their books, however will they field an XI?

Burning hatred
‘ANTONIO CONTE fears Chelsea are BURNT OUT before the season has even started’ is the quite ludicrous opening paragraph from Mike McGrath on the back page of The Sun, under the headline of ‘Ant’s Blues ‘burnt out”.

Alternatively, Antonio Conte has just said that they are “very tired because they played three games in seven days” and does not fear anything at all.

‘BURNT OUT’ suggests permanence; “very tired” suggests they just need a nice kip. Don’t we all?

Still, you got a back page on a quiet Monday. Though we miss the days when quote marks meant, you know, quotes.

Persistence
The Sun’s Martin Blackburn has an extremely short memory. In his rush to tell us that Manchester City are now set to play ‘tiki-whacka’ (ha) football under Pep Guardiola after the arrival of Ederson, he gives us a potted history of the goalkeeping situation at Manchester City.

‘Pep turned up at the Etihad and promptly dumped Joe Hart because he did not feel the England keeper was good enough outside the box.

‘He persisted with Hart’s replacement, Chilean Claudio Bravo, despite a series of high-profile errors. No matter what happened, Guardiola refused to back down.’

Until he did back down and dropped him for two months.

Slam of the day
According to the Daily Mirror: ‘NATHAN AKE slammed Chelsea boss Antonio Conte’s claims that young players at Stamford Bridge are ‘impatient’.’

Actual quotes from Nathan Ake: “I understand what he said, but Chelsea is a big club and it was going to be difficult to come in and play straight away.”

Recommended reading of the day
Paul Macinnes on the ‘electrifying jolt’ of Aguero’s goal.
Alex Shaw on Nemanja Matic being signed to help Paul Pogba
Seb Stafford-Bloor on watching Goliath punch a mirror