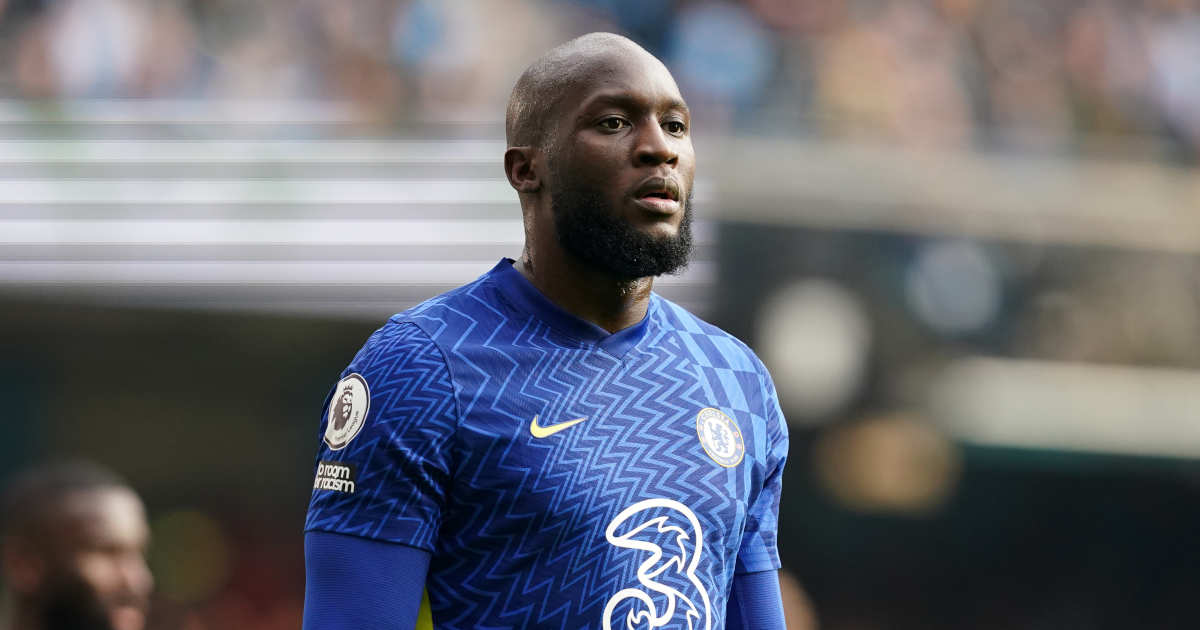 The columnists are out in force today, with Romelu Lukaku still under the spotlight and Kurt Zouma-related contrarianism…

Being careful around the blues
Romelu Lukaku has been the subject of considerable discussion and speculation across the media since his performance for Chelsea against Crystal Palace, and on Monday afternoon Thomas Tuchel expressed his irritation at the tone of much of the coverage. There are many ways in which Tuchel’s press conference comment may be interpreted:

What can I do? I don’t know. We have to deal with it. The data is out there and the data speaks a certain language. He was not involved in our game, it’s sometimes like this.

It’s, of course, not what we want or Romelu wants but it’s not the time to laugh about him and makes jokes about him.

‘It’s not the time to laugh about him and makes jokes about him’ is open to broad interpretation, but one of those is, ‘please respect that this player may be undergoing serious confidence issues’, and that should be given respect. Sow how have the tabloid newspapers reported Tuchel’s comments this morning?

DON’T LAUGH AT HIM (The Daily Mail)

DON’T LAUGH AT OUR LUKA (The Daily Star)

This isn’t a matter of ‘cancel culture’, or anything like that. It’s about how we respond to Tuchel’s comments, and shouting ‘DON’T LAUGH AT HIM’ from your back pages the following morning in direct reply to them probably isn’t the most appropriate way to do so. Tuchel’s response was actually excellent management, answering the question in such a way that it calls for respect from those of us observing from a distance, and for us to question ourselves and our own responses to what we see on the pitch.

A mountain of Martin
It is a bumper day in the back pages, with many having brought out their big guns to reflect on the weekend’s football, so let’s kick-off in the Daily Mail with Martin Samuel, who luxuriates out into a page and a half and and no fewer than nine different stories.

Samuel opens with a contrarian piece titled ‘Lukaku’s letting his team-mates down… not the other way round’, which seems like a very binary position to take. As has been pointed out elsewhere, football is a team sport, and when players aren’t giving the ball to someone who is on the pitch to that extent, perhaps that responsibility should be shared a little.

Confidence issues notwithstanding, football is a team game and this is baked into its very nature. Samuel acknowledges that the Match of the Day team of Gary Lineker, Alan Shearer, Ian Wright and Dion Dublin, who reviewed Lukaku’s performance was ‘close to a retired strikers club’, but rather than putting much thought into the analysis of four people who played more than 2,000 club games between them, he instead dismisses it by saying, ‘That’s too easy, blame the supply line’, as though they may consider their membership of the strikers’ union to be more important than analysing to the best of their abilities. It’s extremely bad faith to assume that this is the only reason they could reached the conclusion they did.

At points, Samuel’s use of statistics can be… somewhat selective. Saying that ‘(Timo) Werner scored three goals for Chelsea under Tuchel last season, but of the 24 games in which he started, Chelsea won 16 and drew five’ leaves Mediawatch wondering why he should have decided that only Timo Werner’s appearances under Tuchel should be considered.

Because just like every other Chelsea player, of course Timo Werner’s win, lose and draw record over the second half of last season was very good. The team’s record was very good. Ultimately, Samuel is engaging in a little revisionism here. In May 2021, he wrote himself of Werner that, ‘Whatever Chelsea have been doing has to change’.

He also describes Tuchel’s claims that strikers have often struggled at Chelsea as ‘weird’, even though, four pages on in the same newspaper, there is a big table of strikers signed by Chelsea over the course of Roman Abramovich’s ownership, of whom substantially fewer than half – 9 out of 23, to be precise – have a goalscoring record better than a goal every four games. For a club that wins very regular silverware, that is eye-catching. And if that table is anything like reliable, it certainly doesn’t seem ‘weird’ for Tuchel to have said what he said.

‘It will be argued Tuchel needs to make Lukaku work’, he concludes, ‘but it is the player who must get cracking’. Martin Samuel was saying exactly the same thing about Timo Werner in May 2021. He stops short of saying that Werner should replace Lukaku in the team, but the implication is clear. ‘God loves a trier’, he writes of Timo Werner now. ‘He looks an athlete, a sprinter, a hard worker, and these are fine attributes; but for a goalscorer they are the base’, he wrote about Werner at the end of last season. Why leave that important qualifier off the end of the argument this time around?

A jazz pedant writes
In The Sun, meanwhile, Andrew Dillon is having quite a morning with his columns, one of which jokes that:

The Holland squad list from Euro 2020 could be the line-up of a Blue Note jazz quartet as much as a football team. On sax is Denzel Dumfries, featuring Quincy Promes on piano, with Memphis Depay and Wout Weghorst completing the the ensemble and taking centre stage for a glittering night at Ronnie Scott’s.

It’s well known that Dutch can sound highly unusual to British ears, but obviously ‘just go and read the Wikipedia squad list for any Eredivisie team’ doesn’t allow for badly photoshopped pictures of the players mentioned playing musical instruments. Mediawatch will (reluctantly) allow this fluff, but cannot allow ‘Take Scat’ as the headline for it all. Scat is a vocal style, so why have three them been plonked down at musical instruments? One of them has got a saxophone in his mouth, for God’s sake. It’s kind of the point of scat that your mouth is the musical instrument. Scatman John (RIP) must be turning in his grave.

‘They have profile too, with Holly Johnson, of Frankie Goes To Hollywood fame, and campaigner Peter Tatchell.’

‘But [KLAXON IN THE F365 OFFICE GOES OFF] where are West Ham fan protests against David Sullivan and his X-rated empire which arguably exploited men and women of all sexualities? Or Gooners protesting against Rwanda, a club sponsor whose human rights record abuse is poor?’

Collymore is into logical fallacy territory with this sly bit of whataboutery, the logical fallacy of attempting to discredit an opponent’s position in a debate by charging hypocrisy without directly refuting or disproving the argument made. Mediawatch is prepared to believe that Collymore just hasn’t thought this through rather than that he is deliberately seeking discredit, but Stan should already know that playing anywhere adjacent to whataboutery can be like playing with fire.

Martin Samuel goes down a similar cul-de-sac in the Daily Mail. The furore over Kurt Zouma has reached the phase of circularity, and Samuel is keen to keep it spinning. ‘Zouma can still be the cat-kicker and have a very good game’, reads the headline and well… yes, yes he can.

He then launches into a tirade about what BT Sport didn’t say about Zouma’s performance for West Ham against Newcastle. Of course, because Samuel is talking about what BT Sport didn’t say, he can’t provide any direct quotes, so… he makes up some of his own. ‘No doubt there were sermons prepared had he fallen apart and gifted Newcastle three goals’, he writes, ‘but the editorial line seemed to be based on the idea that, if Zouma played well, viewers at home couldn’t handle the truth’.

What’s this about ‘the truth’, Martin? Because all Mediawatch can see from here is a bunch of opinions being shouted very loudly, and opinions aren’t the same as facts.

He also adds that, ‘So Zouma performed impressively and anyone who says so must like kicking cats’, as though it’s impossible to hold the thought that people shouldn’t commit acts of animal abuse and play well in a game of football in our heads at the same time. Has anyone said that other than in jest or for points-scoring bantz? Or is Martin effectively inventing his own quote, the wildest and worst opinion that he can think of, just so that he can dismantle it?

Phwoar analogies
Jarring juxtaposition of the day goes to The Mirror. On page 52, they give up a page to an excellent and important article by John Cross on the reignition of the debate over head injuries in the game, which has come about following the injury to Leeds United’s Robin Koch during their game against Manchester United.

But directly opposite their headline reads, ‘PHWOAR OF THE ROSES’, referring to a post-mach interview with Bruno Fernandes (don’t ask us to make actual sense of the headline – it’s probably a reference to the ‘amazing support’ that he made, but since when did tabloid sport headlines bear any similarity to the English language?). It’s probably the fault of Mediawatch for still buying paper editions of newspapers, but seeing ‘PHWOAR OF THE ROSES’ opposite a large picture of Koch being helped from the pitch at Elland Road with his head swathed in bandages is… unfortunate, even if it’s clear that the picture and headline from two separate stories.