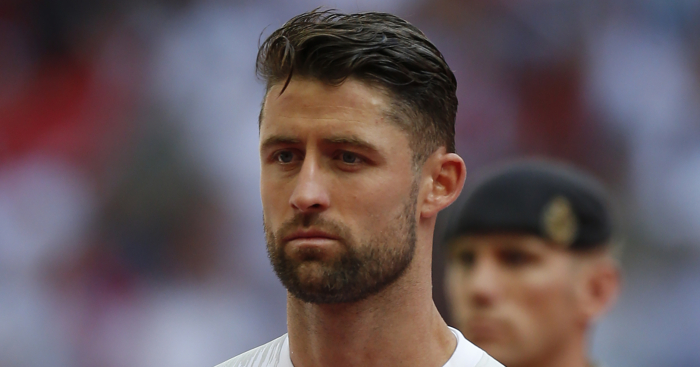 World Cup sticker
England were both very good and pretty terrible on Saturday against Nigeria but they did, you know, win. So how does The Sun’s Chief Football Reporter Neil Ashton begin his match report?

‘GARY CAHILL could easily have told Gareth Southgate to stick his World Cup.’

‘A player with a Champions League medal, two Premier League titles, a Europa League win, a stack of England caps and most recently an FA Cup gong is in a pretty powerful position.’

Not in as powerful a position as the England manager, Neil.

‘Chelsea’s central defender was entitled to be a bit peeved when Southgate began phasing him out after qualifying for the World Cup.

‘England’s coach left him on the bench for three successive games – Lithuania, Germany and Brazil – before completely ditching him for the March friendlies.’

And there we have it; Cahill ‘could easily have told Gareth Southgate to stick his World Cup’ because he had been left out of one squad. Because that’s how adults behave, isn’t it?

The fact that Cahill had started just one of the previous six Chelsea games before Southgate named that squad is probably a little relevant at least. Well, to everybody but Ashton anyway.

As the man himself said last month:

“I couldn’t do anything when I was out of the (Chelsea) team. When I was back in the team and got back to the levels I’m ready to perform at, when I got back in I was doing it time and time again.

“I’ve just got to perform as best I can, which I’ve tried to do in the last five, six weeks, to put myself back in the frame. If it’s good enough, it’s good enough… if it’s not, it’s not.”

Screw you for being so reasonable, Gary. You were dropped ONCE; you should have told Southgate to swivel.

‘The only reason he (Sterling) has escaped another savaging is because everybody recognises that there is only so much a 23-year-old can take.’

Nice of somebody at The Sun to acknowledge this, even if it comes a little late.

‘Sure, he is on £180,000 a week, and there will be plenty of people out there who think he should be able to handle a battering.’

Leave him out
If you thought we were indeed done with Raheem Sterling, then you are far, far more naive than Mediawatch. We suspected Martin Samuel of the Daily Mail had not yet finished. And Sterling’s dive gave him just cause to go again…

‘It comes back, again, to discipline. The responsibility to heed and carry out instructions, to turn up on time, too. The tattoo row overshadowed a far more serious transgression, Sterling reporting late for England duty, despite having been given an extra day away. A stricter coach – Fabio Capello, for instance – might have told him not to bother coming at all. Maybe Southgate would have, too, had he been blessed with the riches and options of some of his contemporaries.’

A reminder: He was 12 hours late. He apologised and he was admonished. Had Southgate left him out of his World Cup squad for being a few hours late for training, he would not be ‘strict’; he would be a bloody lunatic.

Serial offender
According to the fact-box that accompanies Martin Samuel’s piece:

‘Since joining City in 2015 only two players have been booking for diving more than Sterling in the Premier League.’

Yes, he ‘arrived in London’ to watch his singing sister perform at the Half Moon pub in Putney on London.

Apparently he ‘could yet sign for United in the coming days’. And equally, he really could not.

The big reveal
Struggling to understand why Germany have dropped a player you have seen play for Germany once?

According to The Sun online: ‘Reports in Germany have now revealed Sane failed to make the squad due to his poor international form.’

The moment? The exact moment? Let’s read on…

‘Ronaldo made clear to teammates his desire to leave Los Blancos in the weeks before the Champions League win over Liverpool in Kiev.’

It doesn’t sound like you know the moment, fellas.

But this is all ‘according to the Manchester Evening News‘ so maybe they were more specific.

‘Marca suggest the Portugal forward informed his Real Madrid teammates prior to the Champions League final victory over Liverpool last month of his intentions to leave the club.’

‘Prior to the Champions League final’ sounds even more vague. What did Marca actually say (on Saturday morning)?

‘In the weeks building up to the final in Kiev, he’d let his colleagues know of his wish to move on to pastures new.’

By Monday the Daily Mirror are revealing the ‘moment’. And that ‘moment’ is ‘some time in the weeks before last weekend’.

One player, two views
John Cross on Dele Alli, Daily Mirror: ‘This was a big performance – and an important one. He played a slightly deeper role, covered more ground, and may just have regained his World Cup starting place. 8/10.’

Sami Mokbel on Dele Alli, Daily Mail: ‘Kept things ticking over in a deeper midfield role without being spectacular. 6.5/10.’

A right Charlie
Should Jordan Pickford seek any advice as he heads to his first World Cup as England’s first-choice goalkeeper, he should read Charlie Wyett in The Sun:

‘Moving forward, Pickford could do well to learn from the mistakes Hart has made for clubs and country, particularly over the past two years.

‘Hart hardly covered himself in glory at Euro 2016 and his career went swiftly downhill after that.’

So in short, don’t be sh*t at goalkeeping, Jordan.

Wyett is wasted at The Sun; he should be a life coach.