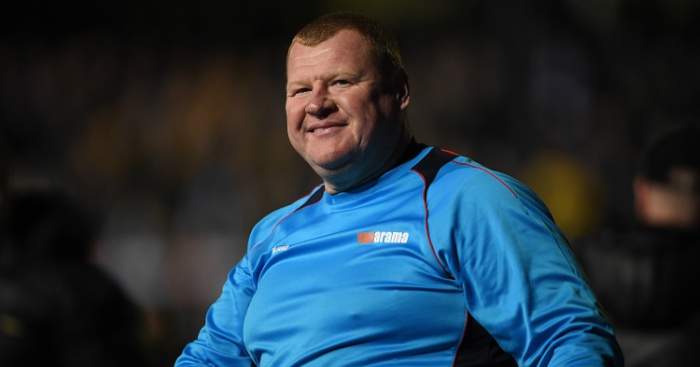 Pie-eyed
Did you think The Sun would just abandon Sutton goalkeeper Wayne Shaw after he was asked to resign for potentially breaking gambling rules after he ate a pie to give publicity to their sister company SunBets? You really think they would leave him ‘HUNG OUT TO PIE’?

What follows in this ‘EXCLUSIVE’ interview is some utterly wonderful backtracking in which The Sun and Wayne Shaw want to make it very, very clear indeed that he was motivated by anything and everything other than SunBets when he ate that pie on the Sutton bench.

He did it to wind up Arsenal fans, you see. There had been “a lot of banter” and he wanted “a bit of fun”. It was “overwhelming” with all the international Arsenal players, it “got too much for him” and he “just got carried away”. Wouldn’t we all eat a pie if we met Alexis Sanchez?

And why did he have the pie in the first place? Well, “because he was feeling a bit light-headed” at half-time. And why didn’t he eat it at half-time, away from the cameras that meant SunBets had to pay out on their 8/1 ‘novelty bet’? We will let Wayne explain:

“I thought I couldn’t eat it straight away as I might get a bit of reflux. That’s why I ended up waiting until all the subs were on.”

Obviously, the real crux of the story is that Wayne Shaw absolutely did not profit from eating that pie (and nor did anybody he knew) because he never told anybody he was going to eat the pie. It was spontaneous ‘banter’ that only happened in front of the cameras because of a fear of indigestion. So you can all leave him and SunBets alone now.

Except, well, the problem with saying “I didn’t tell anyone I was going to do it” on Thursday is that somebody will always remember that you said this earlier in the week:

Oh. Though kudos for Shaw for managing to squeeze in what some might misconstrue as a spot of advertising in those quotes.

And the problem with saying “there was no financial gain for myself or anyone I know, friends or family” is that somebody will always remember that you said this earlier in the week when asked if he knew anybody who had bet:

“I think there were a few people. Obviously we are not allowed to bet. I think a few of the mates and a few of the fans. It was just a bit of banter for them. It is something to make the occasion as well and you can look back and say it was part of it and we got our ticket money back.”

And then you went on the telly and said this:

“We’re not allowed to bet, but a few of the lads laid on. So hopefully there will be a pie and a pint in the local when I get back.”

There’s nothing to see here, guv, apart from a lot of pictures of a fat man eating pies.

Steven Caulker and the ‘undeniable scum’
You know who’s a big fan of The Sun today? Steven Caulker, that’s who.

Oddly, he was not flattered by their description of him in this headline – ‘Lauren Merrick walks dog as QPR ace lover Steven Caulker spends two nights in hotel after ‘cheat’ graffiti attack on car’ – which is bizarre, as who doesn’t want to be described as an ‘ace lover’?

Instead, he has got rather annoyed that people took pictures of his girlfriend walking their dog while very clearly implying that he was jettisoned to a hotel because of his infidelity.

The Sun quote a ‘source’ saying: “He came in on Sunday and one of the staff who is a big football fan recognised him. He was trying to keep himself to himself and avoiding eye contact.

“After he went to his room a quick search of the internet revealed why he was staying with us – he was in a spot of bother domestically.”

And they quote Lauren herself as saying: “It was a very public incident and I was very angry with him.”

All of which would have gone unchallenged if Caulker himself had not taken to Instagram to point out a couple of minor problems with the story:

1) ‘Firstly, ‘my’ stay in the hotel was alongside Lauren which the highly unprofessional hotel staff failed to mention. The reason for our stay was to get away from the press, harrassing us and our neighbours daily for a story that doesnt exist.’

2) ‘Lauren has not said one single word to the media, so her ‘quotes’ written in the papers are absolute lies!!! ‘

Apart from that, it’s gone very well for Nick Pisa, with his ‘PICTURE EXCLUSIVE’.

Mind you, this is the same Nick Pisa who appeared on an Amanda Knox documentary on Netflix and said:

“We are journalists and we are reporting what we are being told. It’s not as if I can say, ‘Right, hold on a minute. I just wanna double check that myself in some other way.’ I mean, goodness knows how. And then I let my rival get in there first before me, and then, hey, I’ve lost a scoop.”

We will leave the last words to Caulker himself in his description of The Sun: ‘Undeniable scum.’

Miracle cure
The Sun’s resident Jose Mourinho lickspittle Neil Custis is still banging that same old drum, saying that ‘THE QUEST for a cup treble continues’ for Manchester United. Just the 11 games to go now; they’re so close, they can almost smell it.

‘The table has told us this is England’s sixth-best side for some time. But United are much better than that.’

And certainly, the way they swept past France’s fifth-best side (20 points behind the Monaco side conquered by Manchester City this week) is testament to that. If only the Premier League didn’t insist on ranking teams by the number of points they accrue rather than the enthusiasm of Neil Custis for a manager who has not called him ‘Fat man’.

‘Boss Jose Mourinho needed time and he has used it. Time to unpick the lock that Louis van Gaal had clamped on these players.

‘Time to remind them that they too could make their own decisions. Time to sort out the defence…’

That would be the defence that conceded fewer goals in the Premier League than any other last season; they sure did need an awful lot of work.

In your face
Harry Redknapp understands why Wayne Rooney would want to leave Manchester United and explains as much in his Evening Standard column.

‘Wayne always wants to play and that’s what made him great. He was a street footballer with the same hunger and desire as a kid in the playground.

‘It’ll be killing him to sit around as part of a squad, even if he has broken Sir Bobby Charlton’s goalscoring record.’

Yes, so we can all agree that the best thing Rooney can do is move to a lesser team where they might need him more, maybe a club that is struggling to score goals, where the record England and Manchester United goalscorer could use his experience to take them to the next level.

Sorry, what now Harry? This is a team further up the table than Manchester United (sorry, Neil) who have scored 16 more goals than the team that can find no place for Rooney.

‘I watched Arsenal the other night at Sutton and I know it was a difficult pitch but some of their younger players were getting caught in possession, losing it cheaply and were putting their team in danger.

‘There was nobody there shouting: “Oi, f***ing liven up!” They get away with it all the time. Nobody sticks the boot into them, whether that’s from the dugout or other players on the pitch. Rooney would be someone out there on his team-mates’ case, digging them out if they aren’t at it. That would be invaluable for Arsenal.

‘Everyone always says they have no leaders and that’s because it is true. Theo Walcott captained the team the other day. Kieran Gibbs did the same for half an hour against Bayern Munich last week when Laurent Koscielny got injured. Neither of them are true leaders.

‘Say what you like about Wayne but his experience and will-to-win is up there with the very best. I saw a couple of Arsenal lads lose the ball and just stand there against Sutton. You need Wayne out there on the pitch getting straight into their faces reminding them what’s what.’

An absolutely foolproof plan. Arsenal should definitely pay Wayne Rooney £300,000 a week to shout at players in a game they won anyway. You simply cannot put a price on an Englishman shouting “oi, f***ing liven up!”

Feel the power
“They won’t like going to the King Power, won’t have been anywhere like it.”

That’s BT Sport pundit Rio Ferdinand on Sevilla’s trip to Leicester in a fortnight’s time. Because there’s nothing quite as daunting as playing in one of English football’s many homogeneous, identikit stadiums.

Or maybe Ferdinand has heard that Sevilla’s players all have a phobia of cardboard clappers?