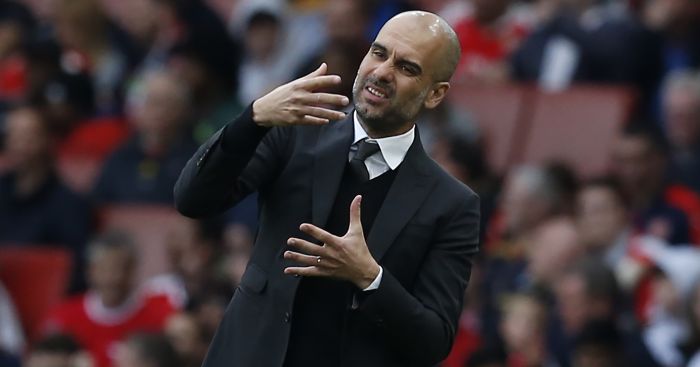 Description of the day
‘Inside the tunnel of hate’ – The Sun.

The brawl update you didn’t even realise you needed
‘Pep Guardiola takes a walk in Manchester city centre with wife Cristina Serra after weekend derby win and post-match fallout’ – MailOnline.

Man walks. Check his coat pockets for milk and bottles.

Picture this, me and you 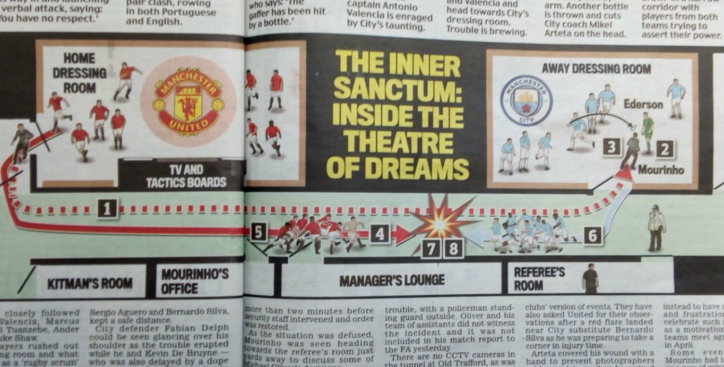 1) That poor police officer.
2) Four Manchester United players running on the spot in their own changing room.
3) A topless United player (presumably Marcos Rojo).
4) The clipart explosion to indicate a fight.
5) The trajectory of a bottle thrown by a Manchester City player.
6) How coquettish that City player looks.
7) ‘TV and tactics boards’.

Brings a tear to the eye
‘Manchester City’s 14-game winning streak, a new record in a Premier League season, is fantastic and I doff my cap to Pep Guardiola and his team. Having the bravery to say: “This is my philosophy and it’s what I believe” is something all the great managers have.

‘Whether it’s long-ball, counter-attacking, pass and move, or keeping it on the deck, the best managers, the best football bosses, believe their way is the best way to win matches’ – You can keep your wins at Old Trafford and record-breaking runs of league victories, Pep Guardiola knows that he has truly been accepted in England when the Daily Mirror‘s Stan Collymore is convinced.

This romcom started in difficult circumstances in December 2016, when Collymore wrote:

‘If he thinks he’s going to turn up and outplay everybody in the Premier League, and that teams like Watford, Leicester, Bournemouth, Southampton and Crystal Palace are going to let his Manchester City side have the ball for 90 per cent of the time and pass pretty patterns around them so they can get a result, then he is absolutely deluded.’

It has been quite the journey.

What would Sean Dyche do?
Elsewhere in his Daily Mirror column on Tuesday, Stan Collymore is angry at the excuses of Premier League managers. He starts with Jurgen Klopp, moves onto Jose Mourinho and mentions Arsene Wenger, Mauricio Pochettino, Pep Guardiola and Sam Allardyce in passing.

But there is one manager who is as pure as fresh snow: Burnley’s Sean Dyche. Let Collymore explain:

‘It isn’t just those two [Klopp and Mourinho] guilty of excuse-making, because you can guarantee Sam Allardyce would have said the same as Klopp had the foul been on a Liverpool striker by an Everton defender.

‘Burnley’s Sean Dyche is the only manager who’ll say, ‘Yep, we were awful today’, or ‘Actually, we were great’ — and how refreshing that is.

‘The rest of them deflect from their own inadequacies and it’s like being in the playground rather than listening to a professional interview with a Premier League manager.’

Collymore is right, of course. Dyche is indeed the only manager in the Premier League who refuses to blame officials to excuse defeats.

Apart from in August 2016, when he blamed defeat at Swansea on the referee’s decision to award Swansea a penalty but not give one to Burnley.

And in October 2016, when Dyche blamed the amount of added time given and a decision to award a corner on Burnley’s defeat to Arsenal.

And in November 2016, when Dyche said that Burnley’s inability to get given “certain types of decision” was hurting his side.

And in December 2016, when Dyche said that a game against West Ham “was decided by the referee”, and claimed that Burnley “could not get a big decision at the moment”.

And again in December 2016, when after a defeat to Stoke he said: “He’s a good referee, I didn’t think he was so good today. We didn’t get anything.”

And in January 2017, when he said that he knew “how tough this division is but you need officials to make the right decisions and that is the shame today”, and that “they have to be brave to be officials at places like this”.

And in February 2017, when he blamed the decision not to send off M’Baye Niang for celebrating with the crowd for his side’s result.

And in October 2017, when he said that he worried about the “moral values of the game” having seen Burnley had a penalty awarded against them.

And again in October 2017, when he blamed Burnley’s exit from the EFL Cup on refereeing decisions.

And in November 2017, when he hinted at a conspiracy against Burnley when Lee Mason gave Arsenal a late penalty: “It was highly unlikely it wasn’t going to get given on a day like today, that’s all I’ll say.”

But apart from that, he’s grand. How refreshing.

– Given the grades Wilkins dishes out, clubs can presumably sit anywhere between A+ and D-, a total of 12 potential different grades. So eight clubs are given a B and six are given an A. Variety is the spice of life.

‘Three shots on target out of 23 is not very impressive, but they did enough to win the game. I am not sure why Jurgen rotated so much.’

You’ve answered your own question there Ray.

‘I didn’t think Southampton were going to get anything out of the match, so I am giving them a high grade.

‘Newcastle really are in a bad place right now.’

All teams are awarded a B grade. Thanks Ray.

The big question
Godwin’s Law is a theory that every argument on the internet will inevitably end up with someone making reference to Adolf Hitler or his deeds. But the football internet has its own version of Godwin’s Law, whereby when a website runs out of ideas of things to write and wants some quick clicks, they ask some poor soul to say which of Lionel Messi or Cristiano Ronaldo they believe to be better.

It needs no insight and needs to offer no new information (how could it?), because the argument a) has no right answer, just preference and b) has been discussed a trillion times before.

And so to the unimaginative Sun website, and a column from Sky Sports News presenter Natalie Sawyer about which of the two should be considered the better player.

– Cristiano Ronaldo is referred to as CR7.

– ‘Both players are immense and will be legends, if they aren’t already, of the game’

– Messi’s ‘diminutive build and quick feet means many struggle to compete with him one to one’.

– Ronaldo is ‘a physical force’

Know your audience
Quick quiz question: Who do you think merits the largest section on the header image of that Natalie Sawyer column on The Sun’s website?

Is it:
a) Cristiano Ronaldo
b) Lionel Messi
c) Natalie Sawyer.

Slam dunking someone’s head? How does that even work?

Recommended reading of the day
Barney Ronay on Jose Mourinho.

David Squires on the weekend derbies.