Home Mediawatch Sticking up for Merson; calling out Redknapp on Lo Celso 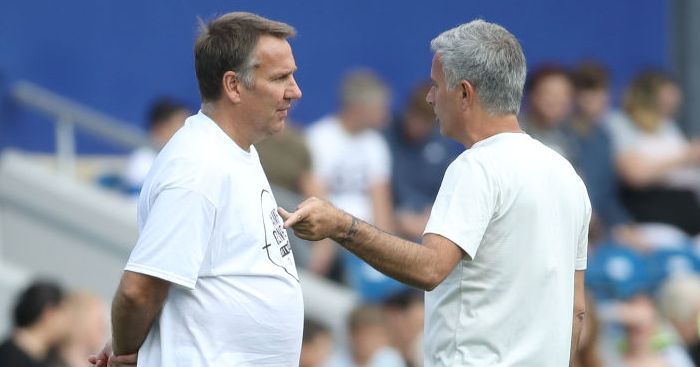 Calling Paul Merson a ‘poor tipster’ after Harry Kane ‘rammed’ that ‘criticism back down his throat’ leaves a bad taste.

Merse code
If your initial reaction to watching Harry Kane score a routine one-on-one after benefiting from West Ham launching players forward in search of a late equaliser in north London on Tuesday evening was ‘lol at Paul Merson,’ then congratulations/commiserations: you are Paul Jiggins.

It was Kane’s sixth shot, with three of his previous five having missed the target altogether. It was a great finish but the sort of goal a competent striker should be expected to score. It was not in any way contradictory to Merson’s claim that “I don’t see him getting 25-30 goals next season with the way Jose will want to play”.

For Martin Samuel of the Daily Mail, it was a ‘riposte, and evidence of a corner turned’. For Jiggins, the man on match duty for The Sun, it was one in the eye for Merson. Because football can only ever be viewed through the prism of contrived rivalries that the media will flog to within an inch of its relevance.

‘ARE you watching Merse?’ he begins.

Probably. It’s kind of his job.

The second goal in a 2-0 win against a relegation-threatened club whose last clean sheet came against Gillingham is quite the retort.

‘The former Arsenal ace had claimed the England skipper would find goals hard to come by under Jose Mourinho.

‘But the England captain perhaps showed why Merse was such a poor tipster as he marked his 200th league appearance for Spurs with their second goal against the hapless Hammers.’

Forgive us for struggling to muster a chuckle at describing someone with a well-documented gambling addiction as ‘a poor tipster’.

How Lo can you go?
Anyway, if there were shots to be taken at a pundit after that game, Jamie Redknapp heads that queue.

Few were completely convinced by Tottenham’s midfield when their team to face West Ham was announced, but Redknapp’s pre-match assessment went a little further.

“I’m not a big fan of that midfield he’s picked today, if I’m honest. Harry Winks, I thought, did ever so well against Manchester United, and I look at that midfield and especially the way Tottenham play, you’ve got to have possession of the ball.

“He’s gone with Sissoko, who I imagine will be the deepest out of the three, Lo Celso and then Dele Alli will be trying to get close to Harry Kane. They’re not great on the ball in terms of… like, Lo Celso will pick it up and run with it, but the emphasis on Sissoko to get on the half-turn and play it forward quickly, that’s not really his game. You know, he’s good at getting after people.

“I look at West Ham’s midfield today, with Noble and Rice and Soucek, they might actually have more footballers in that team that can keep the ball. If they can find some possession they might get a bit of joy in that area.

“But I think that Winks is, especially on Friday, the way that he plays, you need someone in that Tottenham team to just take the sting out of the game, pass the ball, move. And that’s what he does so well. In that three they haven’t really got that type of player.”

1) No player created more chances than Lo Celso, whose three key passes was more than what Noble, Rice and Soucek managed combined (two).

2) Sissoko also created three chances despite only being “good at getting after people” and not being able to “play it forward quickly”.

3) Lo Celso completed the most passes of any player (85) despite being “not great on the ball” in terms of passing.

5) Lo Celso might not be homegrown, nor was he born in Hemel Hempstead, but he really is quite good. And it turns out he actually can be “that type of player” when the circumstances require it.

Mail order
Props to the Daily Mail for this exclusive:

Only the finest contacts from inside Old Trafford could have told you that a fully-fit club-record signing who made a significant impact as a substitute recently ‘is in contention’ to start quite an important game.

Moore like it
TalkSPORT happily hop on that bandwagon with this doozy of an article:

David de Gea’s starting place is under immense pressure but Ole Gunnar Solskjaer publicly backed him this week and it is a huge game.

Oh, by ‘keeper replaced’ you mean that Simon Moore will come in for the ineligible Sheffield United loanee Dean Henderson. That is spectacular sh*thousery.

Strengthen to strengthen
The definition of the word ‘pinpoint’ is to ‘find or identify with great accuracy or precision’. Keep that in mind when you consider this Daily Mirror headline and the accompanying quotes.

That suggests that Klopp will go into great detail about Liverpool’s preparations, and perhaps even their transfer plans. It would be uncharacteristic of the German but hey, that’s what we’ve been promised.

So to the quotes – courtesy of Sky Sports – we go:

“Whatever we do is for the club and our fans. We have to make decisions independent of public opinions.

“They [Liverpool’s youngsters] impress every day. If I say today the future is bright then maybe it is a bit too much pressure on the boys and I don’t want to do that but it looks really promising what the boys offer.”

A quick question…
Was this headline:

…produced by The Sun’s website purely for this slug:

Football365 shithouse headline of the day
‘Do Liverpool and Mo Salah owe Sergio Ramos an apology?’

It’s little wonder the Mailbox has a reputation.

Recommended reading of the day
Jacob Steinberg talks with Joe Cole about stepping down at Chelsea.

Miguel Delaney on the ‘absolute mess’ that is Arsenal.